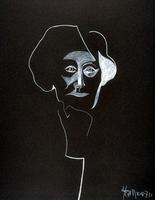 Patricia Kathleen Page, poet, prose writer, visual artist (b at Swanage, Dorset, England 23 Nov 1916, d at Victoria, BC 14 Jan 2010). With her family, P.K. Page left England in 1919 and settled in Red Deer, Alberta. She was educated in Calgary and Winnipeg and later studied art in Brazil and New York. In the late 1930s she lived briefly in Saint John, NB; in the early 1940s she moved to Montréal and worked as a filing clerk and historical researcher. There she was part of the group that founded the journal Preview (1942-45); her poems first appeared in periodicals and in Unit of Five (ed. Ronald Hambleton, 1942). From 1946 to 1950 she worked as a scriptwriter at the National Film Board. She married W. A. Irwin in 1950, and from 1953 to 1964 lived in Australia, where her husband was high commissioner, and in Brazil and Mexico, where he served as ambassador. From 1964 she lived in Victoria, BC where she influenced many younger poets, artists, novelists and filmmakers.

Page's first book was a mythic novel, The Sun and the Moon, published in 1944 under the pseudonym Judith Cape (edited and reprinted by Margaret Atwood in 1973, with stories from the 1940s, as The Sun and the Moon and Other Fictions). In 1987 she published a memoir, Brazilian Journal, short-listed for the Governor General's Award. Later prose included the visionary tale Unless the Eye Catch Fire (1994), the short-story collections A Kind of Fiction (2001) and Up On the Roof (2007), and a meditation on identity, You Are Here (2008). She also wrote a libretto for a one-act opera, What Time Is It, Now? (2004). Her non-fiction included two important statements of poetics, "Questions and Images" (1969) and "Traveller, Conjuror, Journeyman" (1970), both published in the journal Canadian Literature. A collection of her occasional essays, The Filled Pen: Selected Non-Fiction, was edited and introduced by Zailig Pollock in 2007.

Page's books of poetry included As Ten As Twenty (1946), The Metal and the Flower (1954, Governor General's Award for Poetry), Cry Ararat! (1967), Poems Selected and New (1974), Evening Dance of the Grey Flies (1981), The Glass Air: Selected Poems (1985, Canadian Authors Association Literary Award for Poetry), The Glass Air: Poems Selected and New (1991), Hologram: A Book of Glosas (1994), The Hidden Room (1997), Alphabetical (1998), Alphabetical/Cosmologies (2000), And Once More Saw the Stars: Four Poems for Two Voices, a moving series of poems written with Philip Stratford (2001), Planet Earth, Poems Selected and New (2002), published in an American edition as Cosmologies: Poems Selected and New (2003), Hand Luggage: A Memoir in Verse (2006), and The Essential P.K. Page (chosen by Théa Gray and Arlene Lampert, 2008). A new book of glosas, Coal and Roses, appeared in 2009 and was shortlisted for the Griffin Poetry Prize. Page's work has been regularly translated, as in the parallel English/Italian text P.K. Page: Rosa dei venti/Compass Rose (1998). Page also edited an anthology of short poems, To Say the Least: Canadian Poets from A to Z (1979).

The American poet and critic Edward Hirsch characterized Page, in the Washington Post, as one of the "finest and most exuberant Canadian poets... a celebratory writer with a keen eye, a roving intelligence and a compassionate sensibility." Page, explaining her own poetics, has said, "the idea [for a poem] diminishes to a dimensionless point in my absolute centre. If I can hold it steady long enough, the feeling which is associated with that point grows and fills a larger area... It is from here that I write - held within that luminous circle." In answer to her own question, "What is art anyway?" she responds that art is play, a spontaneous involvement in the sheer joy of language. But there is yet something more: "At times I seem to be attempting to copy exactly something which exists in a dimension where worldly senses are inadequate." This search for another dimension, "Another Space," as she described it in a poem of the same title, was primary to her life and art for 40 years; when she was engaged in this search "a new/ direction open[ed] like an eye."

P.K. Page was "a citizen not merely of the world, but of the earth," as Eric Ormsby points out in his introduction to Planet Earth. Indeed, in her early visionary tale of 1981, "Unless the Eye Catch Fire," she anticipates global warming. For the past two decades Page's poems have celebrated the planet, but reminded us of ecological dangers. "Planet Earth" is a celebration: "It has to be made bright, the skin of this planet/ till it shines in the sun like gold leaf." But "Address at Simon Fraser" (1991) reminds the graduating students of that university of the importance of art in relation to climate change. "If we'll but give it time," she insists, "a work of art/ 'can rap and knock and enter in all our souls'/ and re-align us - all our molecules -/ to make us whole again." We must reconnect with nature, she tells us, but time is running out. The poem concludes with a warning: "Art and the planet tell us. Change your life."

When in Brazil, Page began to draw and paint; this intricate and beautiful work, signed P.K. Irwin, has been widely exhibited and has been reproduced in several of her books. Her art is exhibited in the National Gallery of Canada, the Art Gallery of Ontario, the ART Gallery of Greater Victoria and the Winchester Galleries, Victoria. Page's work has appeared with that of other artists, as in Mimmo Paladino/P.K. Page: Works on Paper Inspired by the Poetry of P.K. Page (1998).

P.K. Page received numerous awards, including the Oscar Blumenthal Award for Poetry (1944, Chicago), the Governor General's Award for Poetry (1954), the Terasen Lifetime Achievement Award (2004, returned), and the Lieutenant Governor's Award for Literary Excellence (2004). The National Film Board of Canada produced a film on her poetry, Still Waters - The Poetry of P.K. Page (1991), and her work was featured in special issues of the Malahat Review (1996) and the Journal of Canadian Studies (2004). A symposium on her work, "Extraordinary Presence: The Worlds of P.K. Page" was held at Trent University in 2002, and a collection of her complete works is in progress under the general editors Zailig Pollock, Sandra Djwa and Dean Irvine. Page received 8 honourary degrees, was awarded the Order of British Columbia, and was a Fellow of the Royal Society of Canada and a Companion of the Order of Canada.