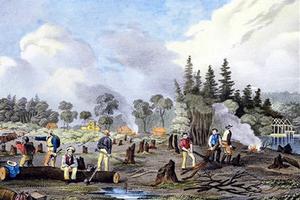 Some pioneer settlers brought personal belongings, including furniture, kitchen utensils, books and ornaments. Some settled on land prepared by Colonization Companies or within reach of villages or towns. For most, however — especially before roads, canals and railways provided communication and transportation of goods — pioneering on all of Canada's frontiers meant isolation, deprivation and hardship. Success was often measured by sheer survival. Yet, usually within a few years, primitive pioneering was followed by relative comfort, and the prospect of security and even prosperity for one's children. Persistence, optimism, thrift, resourcefulness and the acceptance of unremitting hard work became character traits valued by succeeding generations long after pioneer conditions had passed.

Pioneer houses varied according to local building materials and the newcomers' origins and means. But in all cases, dwellings had to be designed to withstand Canada's long, cold winters. A settler's first house was usually a one-room structure made of logs, fieldstone, spruce poles or prairie sod (see Log Houses; Sod Houses). Frame or brick houses with partitions, second storeys, glass windows and shingled roofs signalled the end of pioneering. The original dwelling was often then converted to a stable.

Furniture was often homemade. Consider, for example, the chair made from a barrel, described by Catharine Parr Traill in The Female Emigrant's Guide (1854). Cloth for blankets and clothing, carpets to cover wood floors, pails, and children's toys were also homemade. The mending of boots, harnesses and tinware sometimes had to await the arrival of a travelling tradesman.

Providing fuel for the huge fireplaces, which were usually the dwelling's only source of heat, was a constant chore. Timber was plentiful in many areas but still had to be felled, trimmed, cut into lengths and carried home.

Pioneer diet depended on local produce and was generally nourishing but monotonous. Diaries and travellers' accounts (see Exploration and Travel Literature) tell of pork served three times a day, month-in and month-out. The meals varied only by incorporating coarsely ground meal cakes, stewed dried apples, preserved small fruits and berries, and potatoes and other root vegetables. But game, fish and wildfowl were abundant in most places, and home gardens, dairy cattle and domestic fowl soon led to a more rounded and appetizing menu.

Pioneers adapted familiar institutions such as churches, schools, local government, and the web of social manners and customs, to new conditions. The characteristic co-operative principle found expression in community work parties — also known as bees — for house building, barn raising, clearing fields and making quilts. It was also reflected in local organization and relations between the sexes. A church might serve Presbyterians in the morning and Methodists at night. A school district would be speedily formed, with the teacher being paid by local assessment and boarded around the community. Settlers worked together to build roads, to attract tradesmen and small industry, and to promote the prosperity of their district.

Pioneers on fur-trading, lumbering, mining and ranching frontiers were usually single men. But women joined in the settlement of New France in the 17th and 18th centuries. They also were pioneers in the Maritimes and Upper Canada from 1760 to 1860, and throughout the prairie homesteading era, from 1870-1914. Women's work was essential to the comfort and long-term success of a farm operation.

Canadian immigration and the Dominion Lands Policy encouraged family life as a guarantee of social stability and a larger population. Pioneer women worked tirelessly for their family's material and cultural betterment. Although they suffered loneliness and hardship, the women’s courage and strength gave them a place of respect in Canadian life.