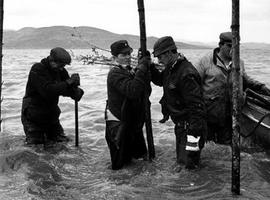 Pierre Perrault, OQ, film director, poet, writer (born 29 June 1927 in Montréal, QC; died 23 June 1999 in Montréal). Pierre Perrault was one of Québec’s most significant and celebrated artists, both a major literary figure and one of Canada’s most important filmmakers. His collective work in radio, film, television and print explore the genesis and nature of French Canadian culture and identity. A pioneer of direct cinema, his elegiac 1963 documentary Pour la suite du monde, co-directed with Michel Brault, is a landmark in Canadian film. His writing received numerous major prizes, including three Governor General’s Literary Awards for poetry, theatre and non-fiction. An Officer of the National Order of Québec, he received the Prix Ludger-Duvernay, Prix Albert-Tessier, Prix Victor-Barbeau and the Médaille des Arts et des Lettres from the Government of France. He was posthumously awarded the Medal of the Quiet Revolution from the Government of Québec for his contributions to Québec culture during the 1960s.

The son of a lumber merchant, Perrault was a rebellious young man who, in his words, was “allergic to authority.” He received a classical education from three of Montréal’s elite private schools, being kicked out of Collège de Montréal and Collège Grasset before graduating from Collège Saint-Marie. While there he founded, with Hubert Aquin and Marcel Dubé, the student journal Cahiers d’Arlequin, in which he published his first play, Pierre en vrac.

In 1955, he began working as a scriptwriter on a weekly radio show at Radio-Canada. He then left the law permanently to write scripts for the Radio-Canada series Le chant des hommes, a daily radio program devoted to folk songs and traditional music. With French folk singer Jacques Douai, Perrault spent the summer of 1956 travelling through Québec’s Charlevoix County on the North Shore of the St Lawrence River — the home of his wife, Yolande Simard — where he recorded the music of the region and interviewed the residents.

Many of the people and stories he encountered on this trip would figure repeatedly in many of his subsequent works. The recordings themselves formed the basis of his weekly radio series, Au pays de Neufve-France (1956–57), which was the inspiration for a Radio-Canada television series of the same name (1958–60), produced by Budge Crawley with scripts by Perrault, comprising 13 half-hour documentaries.

After pitching the National Film Board an idea for a scripted docu-drama about a beluga hunt by the people of Ȋsle-aux-Coudres, Perrault was introduced to Michel Brault, who suggested filming it in the direct cinema style. The result was Pour la suite du monde (1963), a classic of direct cinema which became the first Canadian film to screen at the Cannes Film Festival and won two Canadian Film Awards, including Film of the Year.

Perrault returned to working in radio, as he did throughout his career, until accepting a position as a director at the NFB in 1965. He then completed a short film and two feature documentaries that, together with Pour la suite du monde, form a cycle of films on the Ȋsle-aux-Coudres: Le Beau plaisir (1968), a short film that provides a detailed description of the beluga trap used in Pour la suite du monde; Le Règne du jour (1967), which follows Alexis Tremblay and other villagers featured in Pour la suite du monde as they visit their ancestral home in France; and Les Voitures d'eau (1968), about the fate of the Ȋsle -aux-Coudres’ aging schooners and the process of constructing a new one.

He then made two powerful films about nationalism and political protest. Veering away from direct cinema, Un Pays sans bon sens (1970) is an essay film exploring the new nationalism in Québec and the viability of Québec separatism, while L'Acadie, l'Acadie?!? (1971), co-directed with Brault, is a direct cinema reportage of protests and demonstrations by Acadian students at the University of Moncton.

These films were followed by a series of documentaries on the Abitibi region, all of which centre on farmer Hauris Lalancette. Un Royaume vous attend (1975), co-directed with Bernard Gosselin, laments the decline of farming in the area. Le Retour à la terre (1976), intercuts clips from Maurice Proulx’s films of the region in the 1930s with tales of the contemporary inhabitants and their memories of Proulx’s historic film shoot. Similar to Le Règne du jour, C'était un québecois en Bretagne, madame (1977) follows Lalancette as he travels to and meets with the inhabitants of Brittany, France. The final film in the series, Gens d'Abitibi (1980), chronicles Lalancette’s campaign as a Parti Québécois candidate in the 1973 provincial election.

Hunting and the Wilderness

Around this time, Perrault made two poetic films about issues facing Aboriginal peoples — Le Goût de la farine (1976) and Le Pays de la terre sans arbre ou le Mouchouânipi (1980) — as well as La Bête lumineuse (1982). This film about nine Québécois urbanites on a moose hunting trip in the wilderness screened at the Cannes Film Festival and ignited a firestorm of debate in France and Canada.

Perrault then made a trio of films that re-trace the steps of the discovery of Québec. Les Voiles bas et en travers (1983), made to commemorate the 450th anniversary of the discovery of Canada by Jacques Cartier, is an hour-long documentary about Cartier’s birthplace, Saint-Malo, France. La Grande allure I (1985) and La Grande allure II (1985) chronicle a contemporary voyage across the Atlantic from Saint-Malo and up the St Lawrence River.

In the 1990s, Perrault turned his attention to the Far North of Québec, beginning with L'Oumigmag ou l'Objectif documentaire (1993), a film on the tundra and the musk-ox, in which, for the first time, he did not film humans or dialogue. Instead, his commentary reflects on the documentary genre itself. The following year, he made the musk-ox the sole subject of his final film, Cornouailles (1994). In 1991, he took part in an 11-day voyage from Québec City to Baffin Island aboard the icebreaker Pierre Radisson, which formed the basis of his 13-part radio series L’appel du nord (1992). In 1994, he produced a radio series drawn from interviews with film critic Paul Warren. Perrault retired from the NFB in 1996.

Perrault’s writings, which he described as “an inventory of the spoken word, that poor people’s literature,” were essentially adaptations of his radio programs and films. The works in his first two books of poetry — Portulan (1961) and Ballades du temps précieux (1963) — were adapted from his radio scripts, while many of the prose poems in Toutes Isles: chroniques de terre et de mer (1963) were comprised of commentary from several films in the Neufve-France series. The poems in En déspesoir de cause: poèms de circonstances atténuantes (1971) were drawn from the films of the Ȋle-aux-Courdes cycle. Works from these three collections formed the basis of Chouennes: poems, 1961–71 (1975), which won the Governor General’s Literary Award for poetry. In 1968, he was awarded the Prix Ludger-Duvernay from Montreal’s Société Saint-Jean Baptiste for his literary body of work.

One of Perrault’s last books of prose writing — Le Mal du nord (1991), which earned him his third Governor General’s Literary Award — was drawn from the notes made during his 1991 trip to Baffin Island, while Nous autres icitte à l’île (1999) recounted the people and lifestyle of the Ȋle-aux-Courdes. Both of these books included found poetry in the form of writings by Jacques Cartier and other explorers, as well as oral histories of the people Perrault had interviewed over the years. He published three volumes of poetry in the late 1990s — Jusqu’à plus oultre… (1997), Irréconciliabules (1998) and La visage humain d’un fleuve sans estuaire (1998) — and the notes he had compiled for a book he was writing about the St Lawrence River, Partismes, were published posthumously in 2001.

Perrault played a key role in the evolution of direct cinema, and was a central figure in the process of defining Québec’s national identity. His more than 20 films and 600 radio programs, together with his work in theatre and literature, inspired a deep awareness of Québécois culture, history and language. As film scholar David Clandfield has said, Perrault was “the romantic poet, the master of voice” who turned “the technology of direct cinema into a cinema of experience.”

Jean-Daniel Lafond’s Genie-nominated documentary on Perrault, Les traces du rêve, was released in 1986. Following Perrault’s death in 1999, the Rendez-vous du Cinéma Québécois film festival established the Yolande and Pierre Perrault Award for best emerging documentary filmmaker. Perrault’s work has been the subject of many retrospectives, books and academic analyses. An international symposium on his films organized by the Université de Montreal, the University Sorbonne Nouveau Paris and the Balafon Association was held in Rio de Janeiro, Brazil, in May 2012. His papers are held in the Pierre Perrault Archives at Université Laval.