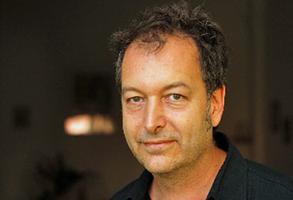 Peter Mettler is one of the most influential figures in contemporary filmmaking in English-speaking Canada (photo courtesy Grimthorpe Film Inc).

Peter Mettler, filmmaker, cinematographer, writer (b at Toronto 7 Sept 1958). Peter Mettler, along with contemporaries Atom EGOYAN, Patricia ROZEMA and Bruce MCDONALD, is one of the most striking talents to emerge out of the so-called "Ontario New Wave" filmmakers in the 1980s. Raised in Toronto by Swiss-born parents (Mettler himself holds dual Swiss/Canadian citizenship), he became interested in the power of images at a very early age. He studied cinema at Ryerson Polytechnical Institute in Toronto. While there he made two short dramas and an award-winning experimental feature film, Scissere (1982), about a recovering heroin addict struggling with his tangled perceptions while trying to re-enter society. In addition to his own work Mettler, a gifted cinematographer, shot the first two feature films of Egoyan, as well as the early works of Rozema, McDonald and several other independent filmmakers in Toronto in the creatively rich early 1980s.

Mettler's subsequent films pursued themes adumbrated in Scissere - the mysteries of human perception, the struggle to locate and preserve individual consciousness and imagination in a media-saturated mass culture, the contradictory ability of technology to both liberate and enslave. These themes are woven into such films as Eastern Avenue (1985), an experimental diary film of Mettler's journeys from Portugal to Berlin; The Top of His Head (1989), a drama about a satellite dish salesman whose ordered, technological universe is thrown into chaos by a love affair; Tectonic Plates (1991), Mettler's free-form adaptation of Canadian theatrical "wunderkind" Robert LEPAGE'S intercontinental dramatic collisions of history, culture and human desire; Picture of Light (1994), a haunting, meditative documentary essay about a journey to northern Canada to film what Mettler admits throughout is unfilmable, the aurora borealis; and Gambling, Gods and LSD (2002), a feature-length experimental documentary film.

Since Gambling, increasingly interested in the ceaseless flow of imagery from televisual media and the Internet, Mettler has turned this fascination into a number of video art installation works, notably Teledivinitry. He has also toured Europe and North America conducting sonic and visual rave events, social gatherings, or "happenings" that start at dusk and go till dawn. Mixing sound and bathing the walls and ceilings of the venues with moving images, Mettler has taken his interest in the ecstatic beyond the feature film medium into the very architecture of the social spaces in which he "performs."

His exploration of the meaning of moving images continues in his 43-minute documentary portrait of the Alberta tar sands, a film that consists entirely of aerial views. Petropolis: Aerial Perspectives on the Alberta Tar Sands (2009), produced in association with Greenpeace Canada, is not only an unsettling look at an environmental disaster waiting to happen but also an investigation, as always in Mettler's work, of the processes of cinematic perception.

Mettler uses all the film technology at his disposal to challenge its very ability to mediate perception. Blurring the aesthetic borders between documentary, experimental and dramatic filmmaking, and always with rigorous visual and aural designs, Mettler has contributed greatly to the expansion of the thematic and stylistic possibilities of Canadian narrative cinema. Despite a relatively modest filmography, Mettler is one of the most influential figures in contemporary filmmaking in English-speaking Canada.