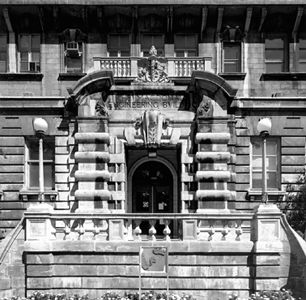 Percy Erskine Nobbs, architect (b at Haddington, Scot 11 Aug 1875; d at Montréal 5 Nov 1964). One of Canada's foremost architects and educators of the first half of the 20th century, Nobbs adapted advanced British Arts and Crafts design philosophy to a new country and a university setting.

Raised in St. Petersburg, Russia, but educated in Scotland, where he received an MA in Arts (1896) from Edinburgh University, Nobbs became an early articled pupil of the Scottish Arts and Crafts architect, Robert Lorimer. Elected an Associate of the Royal Institute of British Architects in 1900, Nobbs soon won 2 of the Institute's prestigious prizes: the Tite Prize (1901) and the Owen Jones Studentship (1902). In 1901 he moved to London, where he joined the London County Council Architect's Department, Fire Brigade Branch, a centre for progressive design based on the ideals of William Morris and his architect friend Philip Webb.

In 1903 Nobbs was offered the Macdonald Chair of Architecture at McGill. As director (1903-10), and then professor of design (until 1940) at McGill School of Architecture, his exceptional training led him to pioneer study of Canada's vernacular architecture, which he regarded as the key to functional, environmentally sensitive modern design. His first Canadian commission, the McGill University Union (1904-06, now part of the McCord Museum of Canadian History), is an outstanding exemplar of his approach. His other works (from 1910-45 in partnership with George Taylor Hyde) include a series of notable buildings and extensions at McGill, numerous commissions in the Montréal region, and the development plan (with Frank Darling) and early academic buildings at the University of Alberta.

A man of many interests and talents, Nobbs was active in the early Canadian planning movement, wrote extensively, won a silver medal for fencing in the 1908 Olympic Games, and in 1948 founded the Atlantic Salmon Association to ensure the species' survival. During his career he served as president of the Province of Quebec Association of Architects, the Town Planning Institute of Canada, the Royal Architectural Institute of Canada, and as acting president of the Royal Canadian Academy. In 1957 he was awarded an Hon. D. Litt. by McGill.