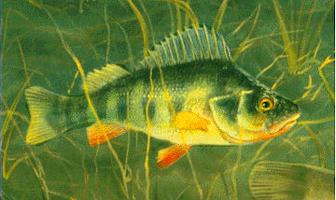 In North America, true perch were confined, originally, to the area east of the Rocky Mountains, but some species have been introduced to the West. In Canada, 16 species of true perch occur, including the yellow perch, the walleye and sauger, 12 darters (genera Ammocrypta, Etheostoma, Percina) and an exotic species from Europe. Darters are very small fish, few being longer than 8 cm. They are most common in Ontario; no species are native west of the Rocky Mountains.

The yellow perch (Perca flavescens) is the one most commonly thought of as "perch." It is distinguished from other members of its warm- to cool-water community by its short, stubby, hunch-backed body; 2 dorsal fins, of which the first has spiny rays; rather large mouth; bright yellow to green eyes; and lateral pattern of 7 green to brownish, tapered bars over a bright yellow to greenish undercoat.

It spawns in spring (Apr-May) in southern Canada, as late as July in the North. No nest is built, but the unique, transparent, gelatinous, accordion-folded strings of eggs are looped over vegetation. These strings can be as long as 2 m and as heavy as 1 kg, and contain an average of 23 000 eggs. The large numbers of almost transparent young are significant in the diets of other important fishes.

The largest adult yellow perch are usually 20-30 cm long, weighing 170-340 g. Specimens as large as 35 cm have been taken in eastern Canada, and one taken in Québec weighed almost 2 kg. Individuals can survive to 9 years of age.

This North American species has a wide native distribution in Canada, from NS (excluding Cape Breton I), across Ontario, northward through most of Manitoba, Saskatchewan and Alberta, southern BC (introduced) and north to Great Slave Lake, NWT. Both young and adults form schools of 50-200 individuals, making them attractive to anglers and commercial fishermen.

Yellow perch are regularly hosts to parasites such as yellow grub (in flesh) and blackspot (on skin), neither of which infect humans. Less frequently, perch carry the broad tapeworm, which can infect humans if raw or poorly cooked fish are eaten. In Canada, this species is classed as a sport and commercial fish. In spring, numerous larger individuals, migrating to spawning grounds, attract anglers. The white, flaky, very tasty flesh makes yellow perch a prominent commercial species in the Great Lakes. The commercial catch in Canada in 1993 was 6466 t, yielding a value of $23.4 million. 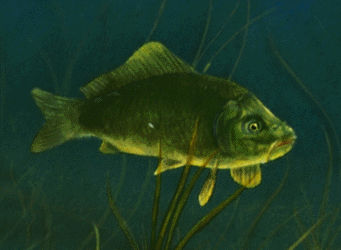