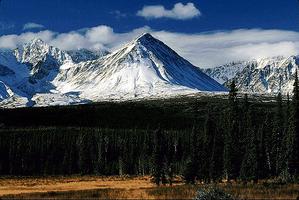 Because the Rocky Mountains are lower west of the region, and since Pacific air masses can cross over with less modification, the Peace River country receives more annual precipitation than nearby east-central Alberta (Corel Professional Photos). 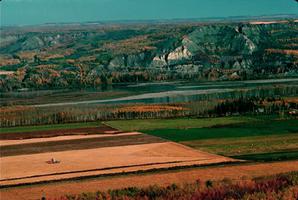 The Peace River Lowland is a gently rolling lowland without clearly defined outer boundaries, extending east of the Rocky Mountains on both sides of the Peace River, sloping downward to the north and east. Although it is often called a "lowland," the landform region is part of the high plains of western Alberta. The higher hills in the foothills east of the Rockies in northeastern British Columbia have elevations of about 1000 m and the plain west of Lake Athabasca is about 300 m above sea level. Local landform features are illustrated by several flat-topped, erosional-remnant hills that rise a few hundred metres above the broad, gently sloping valleys. In contrast, the Peace River and its immediate tributaries are deeply entrenched about 200 m into the lowland in the western section causing significant land-transportation obstacles. However, to the east the steep-sided banks of the Peace River floodplain have decreased in height to about 70 m west of Fort Vermilion. The lowland began to drained by the Peace River and its tributaries with the melting of a vast continental ice sheet and the formation of Glacial Lake Peace between 10 000-15 000 years ago..

Most of the Peace River Lowland was covered by an aspen-poplar forest when the area was occupied by the Dane-zaa First Nation prior to European exploration and settlement in the 19th century. Spruce trees grew on the upper slopes, which were underlain by less fertile grey-wooded soils. Many of the broad valleys, particularly in the western section, had tall, prairie grass vegetation cover and were underlain by more fertile and darker-coloured soils. Agricultural settlers who moved into the Peace River Country (or Peace Country) - as this area is more commonly known - early in the 20th century tended to occupy the grassy areas where less forest had to be removed prior to cultivation.

The climate of the lowland is a little more favourable for agriculture than other parts of north-central Alberta. Because the Rocky Mountains are lower west of the region than elsewhere, Pacific air masses can cross over with less modification, resulting in about 350 to 600 mm of annual precipitation, more than in east-central Alberta. However, cold air masses from the northwest may cover the area at any time, causing the average annual frost-free season to vary greatly from year to year and from place to place. An average frost-free season between 115-125 days is recorded in the agricultural area between Grande Prairie and Peace River.

Fur traders penetrated this forest environment at the end of the 18th century and encouraged the Native people to trap for furs. Fur-trading posts such as Fort Vermilion (1788), Dunvegan (1805) (see Historic Dunvegan) and Fort St. John (1806) were opened throughout the area. The traders and subsequent missionaries grew gardens, and by the early 1900s, Sheridan Lawrence was operating a large farm and ranch near Fort Vermilion. Encouraged by this, pioneer agricultural settlers began to arrive in the southern lowland as part of the general settling of the northern fringes of the prairies and parklands of the Canadian Interior Plains. Settlement accelerated after a Dominion Land Office was opened at Grouard in 1909, and surveyors began to subdivide the prairie lands into quarter-sections for homesteading. In 1915 the Edmonton, Dunvegan and British Columbia Railway reached High Prairie at the eastern edge of the region, and arrived at Grande Prairie and Peace River in 1916. The settlers found a physical environment that compared favourably with that of the southern Canadian prairies. Despite high grain yields, the settlers were hampered by distant markets.

Mixed farmland in the area now totals 25 000 km2 in Alberta and 9000 km2 in British Columbia. Much of the area remains under forest cover, some of which is being used for lumber and pulpwood, especially on the fringe areas. Underground resources of petroleum and natural gas are being more widely explored and exploited.