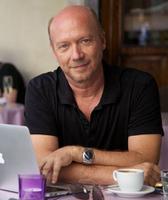 Haggis’s father, Ted, served in the Canadian Navy during the Second World War and competed as a sprinter in the 1948 Olympic Summer Games before running his own construction company. Paul’s mother, Mary, was a telephone operator. She raised Paul and his sisters Catholic, but stopped bringing them to church when Haggis was 13 after she confronted their priest about driving a Cadillac and he justified it as God’s wish. Haggis struggled during adolescence, attending both boarding and progressive schools before dropping out altogether.

Haggis moved to London, England, at age 19 to pursue work as a fashion photographer for a year. He studied cinematography at Fanshawe College in London, Ontario, but did not graduate. However, he helped his father manage the Gallery Theatre in an old church, where he did some carpentry and adapted a production of The Chronicles of Narnia.

In 1975, Haggis moved to Los Angeles to pursue a career writing for television. It took more than three years to sell his first script (for The Love Boat). He persisted with the support of his family and was eventually hired by legendary producer Norman Lear, who gave him his first writing job on Diff'rent Strokes in 1983. A succession of series followed, including The Facts of Life, One Day at a Time, Who's the Boss?, The Tracey Ullman Show, thirtysomething (for which Haggis won two Primetime Emmy Awards), L.A. Law and EZ Streets. He also created the hit Chuck Norris show Walker: Texas Ranger, the crime drama Michael Hayes, and the legal drama Family Law.

Haggis returned to Canada to produce the pilot and write for the first two seasons of the popular series Due South (1994–96), starring Paul Gross as a straightlaced RCMP constable on assignment in Chicago. Due South was the first Canadian series to air during American primetime despite its unabashed national character. The series earned Haggis six Gemini Awards, including two for Best Dramatic Series and two for Best Writing in a Dramatic Series.

In 2000, Haggis moved on to the riskier business of writing, directing and producing movies. After discovering an unpublished collection of short stories by F.X. Toole called Rope Burns, Haggis secured the film rights and wrote the script for Million Dollar Baby on spec. He submitted it to Clint Eastwood's production company and, to his surprise, Eastwood chose to direct and star in it himself. Million Dollar Baby was the sleeper hit of 2004. It earned Haggis an Oscar nomination for his screenplay, won four Academy Awards including Best Picture and grossed over $200 million worldwide.

Million Dollar Baby’s Oscar triumph in February 2005 built on the momentum that began for Haggis when Crash, his first feature as a director,debuted to much acclaim at the Toronto International Film Festival in September 2004. Crash drew on Haggis’s experience of being carjacked in 1991 to depict racial tensions in Los Angeles, with complex overlapping storylines taking place in a hectic 24-hour period. The ensemble cast included Sandra Bullock, Don Cheadle, Brendan Fraser and Matt Dillon. Haggis originally pitched it as a TV series and took five years to make it as an independent film after it was rejected by all the studios. He mortgaged his house and waived his fee to help finance the film, and was so committed that he refused to hire a replacement after he had a heart attack during production.

Crash became a modest hit, grossing eight times its budget in its first two months of release, and drew a passionate following that included Oprah Winfrey, who praised the film’s depiction of race relations in America. It was named one of the year’s best films by many critics and critic’s associations, and won a BAFTA for Original Screenplay and an Independent Spirit Award for Best First Feature. Lionsgate, the film’s distributor, mounted an aggressive Oscar campaign, mailing DVD screeners to all 120,000 Screen Actors Guild members, and Crash scored one of the biggest upsets in Oscar history when it won Best Picture over the heavy favourite, Ang Lee’s Brokeback Mountain. Haggis also won an Oscar for Crash’s screenplay and was nominated for Best Director.

Controversy followed with speculation that homophobia fuelled Crash’s win over Brokeback Mountain’s queer romance. Roger Ebert, who named Crash the best film of 2005, reflected on the “Crash-lash,” writing, “One of the mysteries of the 2006 Oscar season is the virulence with which lovers of Brokeback Mountain savaged Crash… It is not a ‘safe harbour’… It is a movie of raw confrontation about the complexity of our motives, about how racism works not only top down but sideways, and how in different situations we are all capable of behaving shamefully.” Haggis himself admitted surprise and said rival nominee Capote was his favourite. “I’m very glad to have those Oscars,” Haggis said in a 2013 interview. “I knew it was the social experiment that I wanted, so I think it’s a really good social experiment. Is it a great film? I don’t know.”

James Bond Reboot and Other Successes

Haggis’s hot-streak continued when Clint Eastwood hired him to adapt James Bradley and Ron Powers’s novel Flags of Our Fathers, about the bloody Second World War battle for Iwo Jima Island and the iconic photo of the victorious raising of the American flag. The result was two films released back to back in 2006: Flags of Our Fathers, which told the story from the perspective of the American soldiers who raised the flag, and Letters from Iwo Jima, which featured the Japanese perspective of the battle. Haggis secured a third consecutive Oscar nomination for writing the latter film, which also received a Best Picture nomination.

Also in 2006, Haggis co-wrote the script for the 21st James Bond film, Casino Royale. The dark re-imagining of 007 was regarded by some critics as the best Bond ever. “Daniel Craig became known as ‘the Bond who bleeds’ thanks to tough scripting by Haggis,” wrote TorontoStar film critic Peter Howell The film grossed nearly $600 million at the worldwide box office and earned Haggis BAFTA nominations for Best British Film and Best Adapted Screenplay.

Haggis showcased more of the social consciousness that was on display in with the anti-war drama In the Valley of Elah (2007), which he produced, wrote and directed. The film drew poor reviews but earned Tommy Lee Jones an Oscar nomination for his performance. Haggis also co-wrote the 22nd Bond film, Quantum of Solace (2008), but expressed displeasure when his work was re-written. He then wrote and directed the thriller The Next Three Days (2010), starring Russell Crowe, and the multi-narrative ensemble drama Third Person (2013), starring Liam Neeson, Olivia Wilde and Adrien Brody. The convoluted film drew negative reviews, with the Guardian calling it “a work of staggering trash,” but Haggis has called it his favourite of his films.

Haggis returned to television in 2007 with the crime drama The Black Donnellys, inspired by the story of rival London families that ended in murder. In 2015, he directed the acclaimed HBO miniseries Show Me a Hero, co-written and produced by The Wire writer David Simon and based on a fight for social housing in Yonkers, New York, in the late-1980s and early-1990s. Show Me a Hero was named one of the best TV series of 2015 by the Guardian and Indiewire, among others, and earned Haggis a nomination from the Director’s Guild of America.

Haggis has three daughters, Alissa, Lauren and Katy, from his marriage to Diane Gettas (1977–97), and a son, James, from his marriage to Deborah Rennard (1997–2009). Haggis often works with members of his family. His surviving sister, Jo Francis, edited In the Valley of Elah, The Next Three Days and Show Me a Hero. Haggis’s workaholic nature strained his relationships with his children, with Lauren telling the New Yorker, “He’s emotionally not there.” His estrangement from Alissa inspired the backstory for Clint Eastwood’s character in Million Dollar Baby. The two have since developed a strong working relationship.

Haggis has a strong reputation for fundraising and philanthropy, and co-founded the charity Artists for Peace and Justice in 2009. The organization provides relief in Haiti by improving education, healthcare and access to clean water.

Haggis became involved with the Church of Scientology in 1975 and was a prominent member for many years. However, he apostatized in 2009 due to Scientology’s practice of “disconnection,” in which believers sever ties from skeptical friends and family, as well as the organization’s outspoken homophobia. (Two of Haggis’s daughters are gay.) As Scientology’s highest-profile defector, his renunciation inspired a major exposé in the New Yorker that led to Lawrence Wright’s 2013 book, Going Clear: Scientology, Hollywood, and the Prison of Belief. Haggis also appears in Alex Gibney’s Emmy-winning HBO documentary Going Clear (2015), which is based on the book, and has been interviewed widely as an outspoken critic of the church.

On 15 December 2017, amid the #MeToo movement against sexual harassment that was sparked by charges of sexual assault against American film producer Harvey Weinstein, Haggis filed a defamation lawsuit against New York publicist Haleigh Breest, claiming that she attempted to extort $9 million from him in exchange for remaining silent about a claim of sexual assault. Later that day, Breest filed a civil suit accusing Haggis of raping her at his apartment following a movie premiere in 2013.

In January 2018, the Associated Press published allegations of sexual assault by Haggis from three other women for incidents that are said to have taken place between 1996 and 2015, including one allegation of rape. The allegations, which were corroborated by friends, associates and one psychologist, were made anonymously and filed in court proceedings made by Breest’s attorneys in New York.

Haggis denied the allegations against him and speculated that the Church of Scientology may have coordinated them as a smear campaign. Actor Leah Remini, a fellow apostate and critic of Scientology, issued a statement defending Haggis and calling the anonymous accusations against him “suspect.” Haggis’s ex-wife, Deborah Rennard, also defended Haggis in an open letter that challenged the veracity of the claims made against him.

All the women who allege sexual assault by Haggis denied any involvement with the Church of Scientology. One of the women wrote a guest column for the Hollywood Reporter, published on 17 January 2018, in which she explained her decision to remain anonymous and described how she “had to collect documentation and answer detailed questions reliving every aspect of my story. I am not anonymous to the reporters who told my story: They know my name, have seen contemporaneous evidence corroborating the circumstances of my experience and have spoken with people to whom I confided details shortly after the assault.”

In the wake of the allegations against Haggis, London City Councillor Mo Salih introduced a motion to rename Paul Haggis Park in the south end of Haggis’s hometown, which was named in his honour in 2011. After London city council voted 10-2 against the motion, Councillor Harold Usher told Global News, “I don’t believe that we know enough information and the facts about this situation to make a decision. I have had several letters about this but none in support of this.”