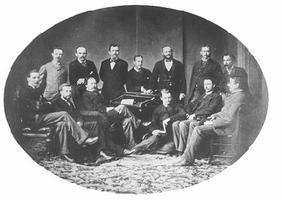 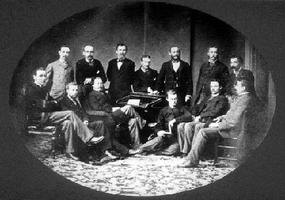 During the sessions of Parliament in Ottawa a telegraph office was maintained in the original House of Commons building. Summaries of the debates were dispatched by telegraph by members of the Press Gallery (courtesy Library and Archives Canada/C-4515).
PreviousNext

The Canadian Parliamentary Press Gallery (CPPG) is a self-governing corporation that consists of accredited journalists who cover Parliament and other Ottawa-based governmental organizations and institutions. Press galleries, or correspondents associations, are important democratic institutions that serve the public (by informing them of political news) and government (by delivering its messages). News media, whose members constitute the CPPG, serve a role in society by reporting information, providing analysis, asking questions and keeping officials in power accountable. Each provincial legislative assembly has its own press gallery.

While press coverage of legislative activities existed long before Confederation, the Press Gallery was founded in 1867 as a self-governing body under the authority of the Speaker of the House. Notably, the only records of Parliamentary debate in the early years of Confederation were those set down by Press Gallery reporters. Until 1880 in the House of Commons and 1871 in the Senate, there were no official transcripts of chamber proceedings (see Hansard).

The Press Gallery began as a small, exclusive club of elite newspaper writers who had close relationships with the politicians they covered. In the 19th century, newspapers were essentially vehicles of partisan propaganda, and journalists were usually attached to a political party (see ​Newspapers in Canada: 1800s–1900s).

Much has changed in the press gallery. While the first members of the gallery came exclusively from newspapers, membership has expanded and become less cohesive since the admission of broadcasters in 1959 and the admission of camera and sound people in 1982. There was also a move away from blatant partisanship of the gallery around the First World War, when technological and social changes led to a commercial press, where objectivity rather than partisanship became the focus of the news organization.

Today, the CPPG is a self-governing corporation that consists of “accredited journalists, photographers, camerapersons, soundpersons and other professionals whose principal occupation is reporting, interpreting or editing news.” Membership is open to any journalist whose primary function is to report on parliamentary or federal government news and who lives in Ottawa and requires access to parliamentary facilities to perform his or her job. They cover the activities of not only the legislature and committees but also the prime minister, Cabinet and the public service. Many members also cover federal election campaigns. Members belong to established media organizations but can also be freelancers if their primary employment is covering the federal government and politics.

The CPPG is supported by a secretariat employed by Parliament. These staff members are not affiliated with media organizations but are referred to as Press Gallery staff. They are employees of Parliament and report to the clerks of the House of Commons and Senate.

The operating budget of the CPPG comes mostly from the House of Commons and through membership fees.

The CPPG has a membership of about 350 full-time journalists from various newspaper, magazine, broadcast and online organizations. Gallery members observe and report on legislative debates including Question Period (see Parliamentary Procedure) and committee meetings as well as the courts and the public service. They also interview political actors in media scrums and press conferences.

Members of the CPPG have designated “media seating” in committee rooms and both chambers — House of Commons and Senate. (Media who are not full-time members can also attend these meetings after receiving temporary accreditation from the CPPG.) Members of the CPPG also have access to the parliamentary Reading Room, borrowing privileges from the Library of Parliament and access to media facilities at the Supreme Court of Canada, Bank of Canada, Statistics Canada and briefing rooms at National Defence headquarters.

While the number of accredited members of the Press Gallery remained relatively stable from the 1980s to the 2010s, its membership has changed somewhat. Regional and provincial news outlets have almost completely disappeared from the Press Gallery. Outlets such as the Hamilton Spectator, Regina Leader Post and The Western Producer no longer have bureaus in Ottawa. As such, the gallery is comprised of reporters from national news organizations. Christopher Waddell, associate professor and Carty Chair in Business and Financial Journalism at Carleton University, suggests that political coverage has become national-centric due to this change. That is, the news focuses on issues of national appeal rather than on regional or local interest, and individual members of Parliament may receive minimal attention. Given that regionalism is a key feature of Canadian politics, the loss of regional and provincial voices is a concern for the quality of political reporting. One exception is the province of Québec, which continues to have a strong presence in the CPPG. The Toronto Star, Canada’s largest daily newspaper, but ostensibly a local paper, also maintains a bureau in Ottawa.

While regional media has declined considerably in the Gallery, they have been replaced by other news organizations. The Internet has allowed for the entry of new players into the press gallery. Online media organizations such as iPolitics and Rabble.ca have bureaus in Ottawa, and such publications as BuzzFeed Canada and The Tyee have CPPG-accredited reporters on Parliament Hill.

Recognizing Canada’s multicultural nature, the Press Gallery also features a number of ethnic media organizations. Thus, political coverage of Parliament is provided in a variety of languages and with attention paid to the concerns of diverse Canadians.

Relations between politicians and the Press Gallery have come a long way from the close ties of the 19th century. Communications professor Daniel Paré and journalist Susan Delacourt suggest that relations between the press and politicians in Canada fluctuate between “healthy antagonisms” to “outright hostility.” The press needs access to politicians as sources while seeking to control the framing and content of news stories. At the same time, politicians need the media to deliver their messages to the public, though they may desire “full and unchallenged versions of their messages.”

From Pierre Trudeau onward, prime ministers have sought to put more distance between politicians and media. Writer and journalist Allan Levine's book Scrum Wars, which chronicles the relationship between Canadian prime ministers and the press, suggests that Trudeau’s indifference to the media led to a strained relationship between his government and the Press Gallery.

Relations between the CPPG and the Prime Minister’s Office (PMO) imploded shortly after the Conservative Party took office in 2006. The PMO limited scrums by barring reporters from the hall outside of the Cabinet room and ceased publicizing the meeting times of Cabinet and caucus (the weekly meeting of MPs and senators). It also began choosing which reporters could ask questions at press conferences based on a pre-assigned list of names.

Beginning 7 April 2006, the CPPG boycotted the list for three months, stating, “we will ask questions in the manner that we see fit and will not accept direction from the Prime Minister’s Office, or anyone who is not a member of the Press Gallery.” In response, the Conservatives began using alternative communication channels, such as local media, social media and bloggers, to circumvent the CPPG. As the boycott dragged on, resolve began to crumble within the CPPG, and a new executive attempted to negotiate a compromise with the PMO. By October 2006, some reporters, under pressure from their employers, agreed to the PMO’s conditions.

As of summer 2015, after nine years in power, the Prime Minister had held only a handful of press conferences in Ottawa and limited most interactions with the press to photo-ops where questions were not allowed.

The Press Gallery Dinner is an annual event in the Ottawa area where CPPG journalists invite government officials, diplomats and MPs as their dates. It dates back to Confederation. The evening is characterized by good humour and self-effacing speeches made by politicians. The event was traditionally off the record until it was cancelled between 1992 and 1996. The dinner went on the record in 1997, when media outlets confronted the ethical issue that journalist–politician confidentiality presented.

The dinner is not broadcast, though it is reported on and considered a chance for politicians to inject humour and personality into their public persona. Today, leaders' speeches can be water cooler gossip for several days — as was Green Party leader Elizabeth May’s speech at the 2015 dinner, in which she said, “Omar Khadr, you've got more class than the whole f—ing Cabinet” in light of Khadr’s recent release on bail and the government’s response. May’s speech was considered to have crossed into partisan politics, which have historically been derided at the event. Some critics believed that May was unfairly targeted for her speech at what has historically been a rowdy affair.

Most of what citizens know about politics comes from news media, and without information, citizens cannot effectively make political decisions. Within the political system, news media are also watchdogs. They scrutinize the actions of government, political parties and politicians, requiring them to account for their decisions. The democratic importance of the media is entrenched in Section 2 of the Canadian Charter of Rights and Freedoms, which guarantees freedom of expression and the press. The CPPG is important for its knowledge and reach — its members are able to relate complex political issues and events quickly, concisely and to a broad audience.