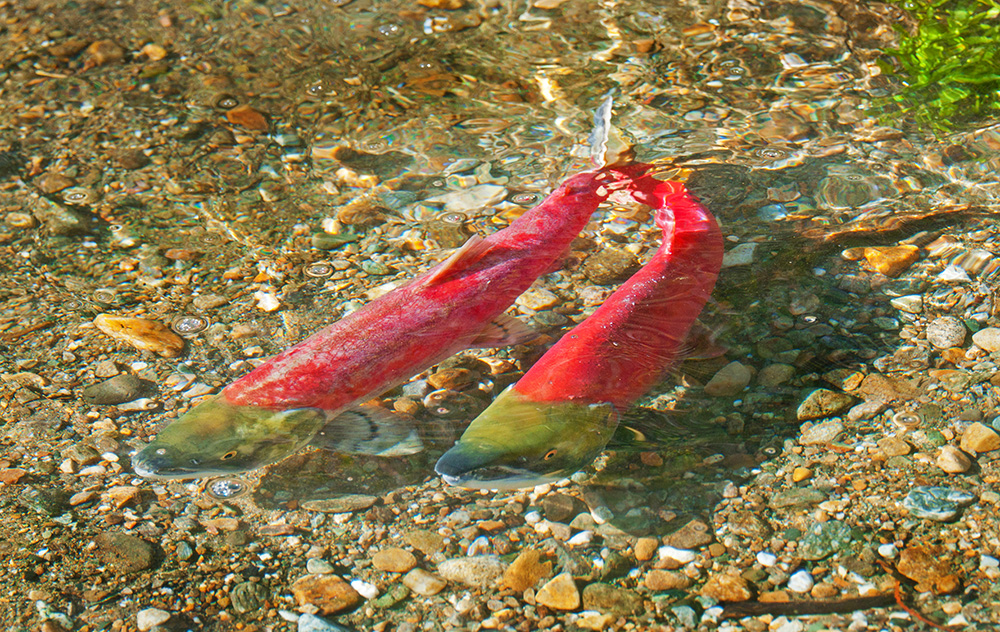 Pacific salmon include 7 species of fish belonging to the genus Oncorhynchus, family Salmonidae. Two are native to Japan (O. masou and O. rhodurus); 5 to Canada, pink (O. gorbuscha), chum (O. keta), sockeye (O. nerka), coho (O. kisutch) and chinook (O. tshawytscha). The genus name refers to the hooked snout characteristic of most spawning males. The native range of Pacific salmon includes the north Pacific Ocean, Bering Strait, southwestern Beaufort Sea and surrounding fresh waters. They occur in an estimated 1300-1500 rivers and streams in BC, notably the Skeena River and Nass River in the north; the Fraser River in the south accounts for about 75% of the total salmon numbers. Pacific salmon are distinguished from other salmonids by their large number of anal fin rays (13-19).

In fall, all Canadian species migrate into rivers and streams to spawn; after courtship, eggs are released, fertilized and then buried in gravel. Both adults die after spawning. In mid-winter the eggs hatch into alevin (a non-feeding larval form). In spring, the young emerge and stay in freshwater streams and lakes from 1 week to 3 years. Most then go to sea for 1-5 years, undertaking a large ocean-feeding migration, although some species have developed land-locked forms (eg, kokanee, a freshwater sockeye). At sea the species attains the following average adult weights: 1-3 kg, pink; 5-7 kg, chum; 3.5-7 kg, coho; 2-4 kg, sockeye; 6-18 kg, chinook (the largest recorded chinook was 56.8 kg). The return migration brings them back to the place of origin, in many cases to the particular gravel bed where they were hatched. Their means of navigation is not fully understood, but it is very effective.

Over the years there have been many attempts to introduce Pacific salmon to other parts of the world. Only a few of these attempts have been successful. Pink salmon have been introduced to Lake Superior and are spreading through the Great Lakes. Coho were planted successfully into Lake Michigan in 1966 and have spread throughout the Great Lakes, where they support an important sport fishery. Kokanee have been transplanted widely throughout North America and New Zealand. In Canada kokanee populations can be found in BC (native and introduced) and Ontario. Attempts to establish chinook outside their range have been made more frequently than for any other species, and populations now exist in the Great Lakes and New Zealand.

Coho and chinook dominate the BC coastal sport fishery and are fished commercially by hook and line, and, to a lesser extent, by gill and seine nets. Sockeye, pink and chum are harvested primarily by commercial net fishermen. In recent years important sport fisheries have developed for these species as well. The numbers of Pacific salmon returning to BC waters varies greatly from year to year and decade to decade with a number of population cycles. For example, many sockeye salmon populations are very abundant every fourth or fifth year. This is seen most dramatically in the Fraser River, where the population in abundant years is many times larger than that of other years. The longer term cycles are less regular and seem to be caused by changes in ocean conditions that affect survival during the feeding migration. These are just beginning to be understood.

Approximately 41.8 million salmon were harvested in 1985 in BC. In 2000 the harvest was only 18.9 million fish. The value of the wild commercial catch has declined greatly due to price reductions caused by worldwide salmon aquaculture. However, the sport fishery has increased in value and the combined sports and commercial catches make the Pacific salmon the most valuable wild animal in Canada.

In 1985 the Pacific Salmon Treaty between the US and Canada was signed and the Pacific Salmon Commission was formed to oversee the management of the 5 species of Pacific salmon. There have been many further treaty discussions, but these have met with difficulty.