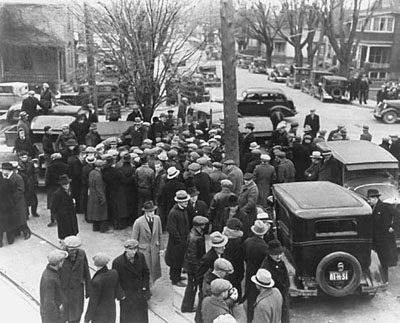 The General Motors strike of 1937, with workers gathered in Oshawa, Ontario (Archives of Labor and Urban Affairs, Wayne State University).

The Oshawa Strike occurred from 8-23 April 1937, when more than 4000 workers of the huge General Motors plant in Oshawa, Ontario, struck. Their requests were simple: an 8-hour day, better wages and working conditions, a seniority system and recognition of their union, the new United Automobile Workers. This last demand had caused the strike: the UAW was an affiliate of the recently created Committee for Industrial Organization (CIO; later Congress of Industrial Organization), which was organizing industrial workers throughout the US. Vigorously supported by Ontario Premier Mitchell Hepburn, GM management strove to keep the CIO out of Ontario. Both the company and the premier wanted a pliant labour force - unorganized, impotent and cheap. To break the strike, Hepburn even created his own police force, known irreverently as "Hepburn's Hussars" and "Sons-of-Mitches."

Two of Hepburn's Cabinet colleagues who opposed his actions, Minister of Labour David Croll and Attorney General Arthur Roebuck, were persuaded to resign. Supported by fellow unionists, neighbours, and CCF and communist activists, but significantly not by the CIO which had little money to spare for Canada, the workers held out for 2 weeks. Eventually, GM, afraid of losing markets to its competitors, capitulated. In the April 23 agreement GM accepted many of the union's demands, without recognizing the union. To gain recognition, the union leadership publicly repudiated the CIO connection. Nevertheless, everyone knew it was a great CIO victory - the first major one in Canada. According to some, the strike marked the birth of Industrial Unionism in Canada.