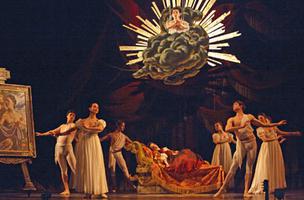 Pynkoski and Zingg developed an interest in Baroque music, theatre, and dance early in their careers, having studied under dance specialists Leonard Crainford and John Marshall (Royal Academy, London), Sandra Caverly, and Wendy Hilton, and with dramaturge Dene Barnett. During a one-year contract at the Moulin Rouge in Paris, the couple undertook a serious study of Baroque opera and ballet, working from original documents in the Bibliothèque nationale de France and the Opéra national de Paris.

The first Opera Atelier production, held at the Royal Ontario Museum (ROM) in November/December 1985, was a double bill featuring Handel's oratorio The Choice of Hercules and Mozart's ballet piece Les Petits Riens. Accompanying the singers was Opera Atelier's musical partner, Tafelmusik Baroque Orchestra. Early productions were held at ROM's Walker Court, but these were subsequently moved to the University of Toronto's MacMillan Theatre. In 1991, the company took up residence at the Elgin Theatre.

The company enjoyed significant growth, but its early history was not without financial difficulties. During the economic recession of the early 1990s, Opera Atelier was forced to cancel its spring 1991 production of Monteverdi's The Return of Ulysses, owing to fewer corporate and private donations. Funding problems continued to plague Opera Atelier, but in 1994 the company received a $110 000 grant from the Paribas Foundation (France). The company has also received funding from the Ontario Arts Council, the Toronto Arts Council, and the Creative Trust.

Opera Atelier has earned an international reputation for its innovative productions (two per year), employing period instruments and elaborate sets and costumes, while remaining keenly attuned to the subtleties of Baroque acting and the nuances of the period. It has given several premiere performances, among them Rameau's Myrthis (world premiere, 1988), Monteverdi's Orfeo (Canadian premiere, 1989), and Lully's Armide (North American premiere, 2005). Other productions have included Purcell's Dido and Aeneas, Charpentier's Actéon, and Mozart's The Magic Flute. In 2004, the company's millennial production of Lully's Persée was remounted and made into the TV documentary Rebirth of an Opera: Persée in the Court of Atelier (Docutainment Plus Productions).

Opera Atelier has collaborated with some of the most renowned early music specialists, including Marc Minkowski, Hervé Niquet, Andrew Parrott, and Trevor Pinnock; and has toured extensively, appearing at opera houses and festivals throughout North America, Europe, and Asia. In 1995, it was the first opera company to perform in the newly restored opera house at the Château de Versailles in France.

Opera Atelier has received a number of awards. The company's 2005 production of Dido and Aeneas won a Dora Mavor Moore Award for best production, and in 2007 Opera Atelier won a Ruby Award for outstanding achievement in Canadian opera. Marshall Pynkoski was recognized by Time Magazine as one of Canada's "Best in Music" in 2003, and was a recipient of a Toronto Arts Award (2004) and the Ordre des Arts et des Lettres from the French government (1996).

Everett-Green, R. "Opera Atelier's Pygmalion as seductive as roses," Globe and Mail, 26 May 1990

Everett-Green, R. "French largesse something to sing about," Globe and Mail, 13 Aug 1994