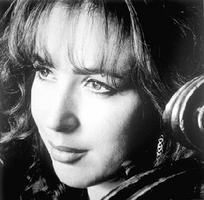 Since her professional debut as soloist with the Boyd Neel Orchestra at age 10, she has appeared throughout the world (photo by Sussi Dorrell).

Ofra Harnoy. Cellist, b Hadera, Israel, 31 Jan 1965, naturalized Canadian 1977. She began cello lessons with her father, Jacob Harnoy, at six. Her family moved to Toronto in 1971. She studied with Vladimir Orloff in Toronto and William Pleeth in England, and in master classes with Pierre Fournier, Jacqueline du Pré, and Mstislav Rostropovich. By 1979 she had already appeared as a soloist with numerous orchestras, including the MSO, the Boyd Neel Orchestra, and the TS. She was a prize winner at the 1978 MSO Concours, the 1979 Canadian Music Competitions, and the 1982 New York Concert Artists Guild Award (she was the youngest first-prize winner in the history of this award). Edward Rothstein, reviewing her Carnegie Recital Hall debut (New York Times, 19 Dec 1982) wrote that she 'not only played like a mature artist, she seemed born to the instrument... the music seemed to sing within her as it was played, and was effortlessly translated into instrumental gestures, free of artifice'.

Harnoy premiered the newly discovered Cello Concerto in G by Offenbach with the Cincinnati SO in 1983, and gave the North American premiere of the Bliss Cello Concerto in Santa Barbara, Cal in 1984. By 1991 she had appeared as a soloist with leading orchestras in Canada, the USA, Venezuela, England (including three tours with the London Philharmonic), Europe, Israel, and Australia. She made seven trips to Japan 1985-91, including one (1991) with the Vancouver Symphony Orchestra. Her recording of Vivaldi concertos (RCA 60155) was one of the best-selling classical albums in the world in 1990, and her other recordings have won numerous prizes, including three Juno Awards (1987, 1989, 1991), the Canadian Music Council's Grand prix du disque (1989), and record of the year or critic's choice awards from Gramophone, High Fidelity, Ovation, and CD Review magazines. H.C. Robbins Landon, reviewing Harnoy's recording of Haydn cello concertos (Fanfare DFL-6001), wrote 'she has approached these war-horses with fresh vision, a superb technique and flawless instinctive musicianship - not to overlook her excellent intonation. In a word, she plays magnificently' (Ovation, vol 6, Oct 1985). Harnoy made the transition from child prodigy to mature artist with surprising ease and by 1991 was widely recognized as one of the leading solo cellists in the world.