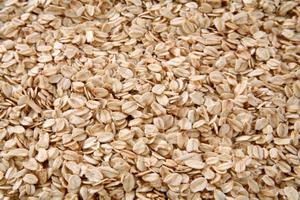 Oats (Avena sativa), member of the grass family (Gramineae), are grown for cereal grains. For commercial purposes, oats are classed as a small or coarse grain. The origin of cultivated oats cannot be traced, but the species came to Canada with settlers from Europe and was used primarily as livestock feed (it was the principal grain fed to horses) and as a staple breakfast food for humans. Oats are best suited to cool, moist climates. The plant usually reaches 1-1.5 m and requires 90-115 days to mature, depending on variety and growing conditions. Under field conditions, each seed yields 1-3 stems, each of which carries a single panicle (cluster of reproductive organs) bearing hulled seeds.

At one time, oats were second only to wheat as a grain crop in Canada, occupying up to 6.8 million ha. Oats now occupy about 1 million ha, the reduction resulting partly from the decline in horse population and partly from the introduction of herbicides to control the closely related weed, wild oats (A. fatua). These herbicides affect common oats but do not interfere with crops such as wheat and barley. Canadian scientists have developed many oat varieties with improved disease and lodging resistance, earlier maturity and better yield, as well as hull-less varieties. Oats are still used primarily for livestock feed or breakfast food.