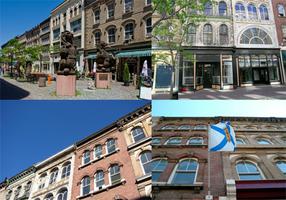 Founded in 1887 in Halifax, Nova Scotia, what has come to be called the Nova Scotia College of Art and Design University evolved, over its first century and more, from a conservative provincial art college focused on traditional landscape painting to one of the premier institutions in North America, well known for its promotion of conceptual art and the avant-garde.

NSCAD University, also known as the Nova Scotia College of Art and Design (NSCAD), was established in Halifax in 1887, largely through the efforts of one of its founders, Anna Leonowens, the former tutor of the King of Siam depicted in the stage and film productions of The King and I. She was also assisted by Mrs Jeremiah (née Helen Furniss) Kenny and sisters Ella and Eliza Ritchie. Originally named the Victoria School of Art and Design, it began as an artistic enterprise to commemorate Queen Victoria's Golden Jubilee. Classes at the Victoria School of Art and Design were held in the Union Bank building in downtown Halifax, moved to rented rooms in the Halifax Academy in 1890, and in 1903 relocated again to the Old National School, where it remained for 54 years.

From Art College to Centre for the Avant Garde

Among the college’s early principals was Group of Seven member Arthur Lismer; he served between 1916 and 1919. Lismer’s service as an Official War Artist in the First World War and his practice as an expressive landscape painter shaped the ethos of the college. The principalship was taken over by British painter Elizabeth Styring Nutt, the college’s first female principal, who oversaw renaming it the Nova Scotia College of Art and incorporating it under the provincial charter. After the war, in 1945, having been an Official War Artist like his teacher Arthur Lismer, depicting scenes like the loading of ships with armaments in Halifax Harbour, Donald Cameron McKay was appointed principal. He held the position until 1967.

In 1969, David Askevold, tired of traditional teaching techniques, introduced what he called the “Projects Class” in which he asked artists to formulate conceptual projects for the class to carry out. As a result, over the next few years, some of the world’s best known and most radical artists, including James Lee Byars, John Baldessari, Dan Graham, Sol LeWitt, Robert Smithson, Mel Bochner, Joseph Kosuth, Vito Acconci, Dennis Oppenheim and Lawrence Weiner, spent time in Nova Scotia . In addition, upon his hiring, Ferguson also insisted on hiring Jack Lemon, a master printer who had worked at the Kansas City Art Institute, to open a lithography workshop. The NSCAD lithography workshop, during the few years of its existence, not only trained students in the craft of printmaking but also produced prints by major Canadian and international artists. The lithography workshop lead directly to the establishment of NSCAD Press, which, under the leadership of the important German art critic and historian Benjamin Buchloh, produced a series of art books now considered classics by figures like Lawrence Weiner, Claes Oldenburg, Donald Judd, Michael Snow, Dan Graham, and Daniel Buren, among others.

NSCAD University in the 21st Century

As of 2013, NSCAD carried a total debt of 18 million dollars, running a deficit of approximately 2.5 million dollars per year, some of which was typically made up by the provincial government. At this point the Nova Scotia Government asked NSCAD to submit a three year plan to draw down its debt and eliminate its deficit, a plan which could involve cost reductions, tuition hikes, and an association with a local university like Dalhousie University and St. Mary’s University. In 2014, Halifax philanthropists Margaret and David Fountain gave the school three million dollars, one of the largest bequests in the school’s history.By 2015 the debt had been brought down to $13 million, with a $2 million deficit.

NSCAD University is situated on three campuses in downtown Halifax: the Victorian terrace-styled Granville campus; the restored Academy Building at the base of Citadel Hill; and the Port Campus on the Halifax waterfront. The university has three public galleries in the Anna Leonowens Gallery, as well as the Port Loggia Gallery on the waterfront, all of which are dedicated to showing the work of students, faculty and alumni. Students and alumni can also exhibit their work at the Seeds Gallery, a not-for-profit commercial gallery located across from the Port Campus. Approximately 1000 full- and part-time students are enrolled at the university.