New Westminster is located on the traditional territory of the Coast Salish peoples, and in particular that of the Qayqayt First Nation. The territory is unceded, meaning First Nations never surrendered their land through treaty or other means.

During the Fraser River and Cariboo gold rushes, New Westminster was the mainland’s mercantile centre and transportation hub. However, the city never displaced Victoria’s overall dominance, due to the latter’s easier access to ocean shipping. In 1868, the Legislative Council chose Victoria as the permanent capital of the recently united colonies of British Columbia and Vancouver Island (see also Politics in British Columbia).

Although New Westminster secured a Canadian Pacific Railway line in 1886, the completion of the main line to Vancouver in 1887 further relegated New Westminster to a secondary rank. Nevertheless, the city remained an important freshwater port, major lumber producer, salmon canning centre, commercial centre for the Fraser Valley and administrative and service headquarters. Institutions located in New Westminster included the County Court, BC Penitentiary, Provincial Mental Hospital and Royal Columbian Hospital. In 1904, the city secured rail links to the United States via the Great Northern Railway and Fraser River Railway Bridge. In 1910, a link arrived to the eastern Fraser Valley via the BC Electric Railway. Finally, a link to eastern Canada via the Canadian National Railway was built in 1915.

The salmon canning industry, penitentiary and a Labatt’s brewery were once major employers in the city. Today, major employers include the Royal Columbian Hospital and professional, scientific and technical services.

The original SkyTrain line, opened in 1986, included a stop in New Westminster. This, combined with the city’s strategic location as the centre of the Lower Mainland and the redevelopment of the waterfront, increased tourism in the area. 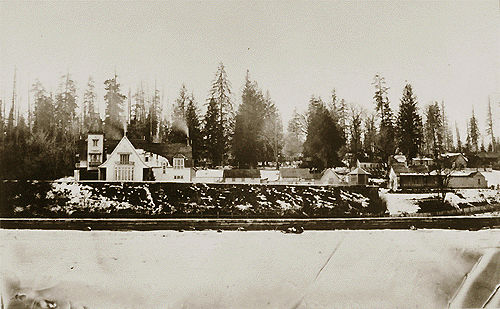 Few of the city’s colonial era buildings remain, the most well known being the Captain William Irving House (1864-65), now the city’s historic centre. A major fire in 1898 wiped out the downtown section and some residential areas. However, many structures built in the following decade survived. Behind the Irving House is the New Westminster Museum and Archives. A retired paddlewheeler on the waterfront of Westminster Quay is the site of another museum, the Samson V Maritime Museum.