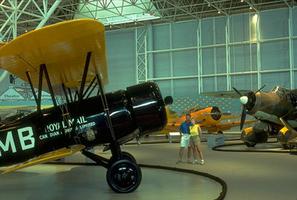 The National Aviation Museum has one of the world's finest aeronautical collections (courtesy Canadian Tourism Commission). 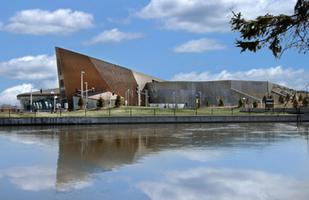 Architect Raymond Moriyama was determined to create an architecture that grows out of the land by the Ottawa River. Some of the landscape around the museum has been deliberately disturbed to suggest the craters and swells of battlefields.
PreviousNext

National Museums of Canada (NMC) was the collective title of the National Gallery of Canada, Canadian Museums of Civilization, Canadian Museum of Nature and National Museum of Science and Technology, joined in a single corporation with the Canadian Conservation Institute, the Museum Assistance Program, the National Museum Library and a range of museums' support and administrative units. Together, the museums collected and conserved data and artifacts, particularly in relation to the Canadian heritage; conducted research in their various disciplines; sponsored publications as well as public programs and exhibits both in Ottawa and across the country; aided and advised institutions and individuals abroad; and assisted and partly funded galleries and museums within Canada.

Origins
The NMC Corporation owed its origin to many factors, including a desire for more dynamic leadership and to simplify the procedure of reporting to government, but also to augment the role of the museums nationally and thereby attract more funding to the institutions. Several resignations and feuds inside the National Museum during the 1950s and 1960s also attracted unwelcome attention, which was increased when a long-delayed new building was again postponed in 1967. In November 1967 Secretary of State Judy LaMarsh introduced a bill in the House of Commons providing for the reorganization of the federal government's cultural repositories into one corporation. Despite some vociferous objections, the National Gallery was embedded in the new entity, while the former National Museum was divided into 3 parts. Within the corporation, the 4 directors reported to a new board of trustees, who, with a secretary general, supervised the National Museums in conjunction with special advisory committees for each museum or gallery. The National Museums Act took effect on 1 April 1968.

A further change occurred in 1972 when Gérard Pelletier, as secretary of state, announced a new policy intended to strengthen the role of the national museums within Canada. A Museum Assistance Program was established to furnish subsidies to regional and local museums, and other central services were expanded to help local collections unable to afford elaborate and expensive equipment and highly trained personnel (see Conservation of Movable Cultural Property). The effect was most beneficial, although critics noted that subsidies, once started, tended to become permanent as local museums integrated them into their budgets. It also proved impossible, in the long run, to accommodate every museum and every purpose in the subsidy program.

Rehabilitation of Facilities
Although much progress was made in rehabilitating the central museum facilities during the 1970s, it remained true that new buildings were a relatively low priority of government, with the effect that museum facilities were dispersed all over the Ottawa region, sometimes in highly inappropriate quarters and locations. The style in which the museums and the National Gallery were administered varied according to the particular board and secretary general. Relations between the board and the secretaries general were not always smooth, and in case of conflict it was still necessary, as it had been before 1968, to appeal to the attention of an often busy and preoccupied minister. While, in the early 1980s, money was finally made available for a new National Museum of Man (now Canadian Museum of Civilization), National Gallery and National Aviation Museum buildings, direction of their construction was assigned to a new CROWN CORPORATION, the Canada Museums Construction Corporation.

In retrospect, it appears that the attempt to distance the National Museums from the public service, which seemed so promising in 1967-68, was not entirely successful, whereas the attempt to broaden the museums' national service, and therefore their political support, was achieved at the cost of postponing necessary improvements at the centre. It was, in short, a very Canadian compromise. This unsatisfactory compromise was eventually resolved in 1988 by the abolition of the NMC.

The Museums Act of 1990 established 4 independent crown corporations, each with a board of directors. They did not cease thereby to be influenced by government policy, especially government austerity programs in the 1990s. They were also expected to seek funds from the private sector-a notion called "partnership"-which meant that their location in the relatively restricted Ottawa region was effectively a handicap. The "national museums" therefore had to cope with less than national funding, and at the beginning of the millennium were struggling to maintain their professional standards against an inadequate funding base.