Music at The Stratford Festival 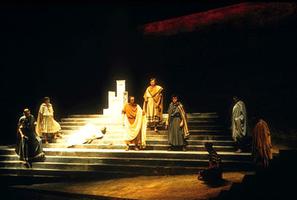 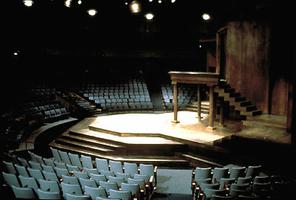 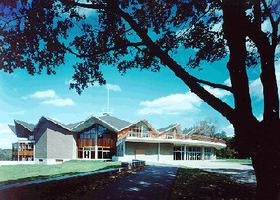 Music at The Stratford Festival

Updated productions of Shakespeare plays have dominated the Festival from its inception. Although music has been cast in supporting roles as background to the dramas or as alternative fare for tourists, the Festival's music directors (Louis Applebaum, Leonard Rose, Oscar Shumsky, Glenn Gould, Victor Di Bello, Andrée Gingras, Raffi Armenian, Berthold Carrière and Rick Fox) have created memorable Broadway musicals, operettas and concerts out of what was, at one time, described as a "poor-relation's" share of the Festival's budget.

The Festival's resident orchestra of 20 to 40 musicians, begun in 1956, offers concert series and provides the incidental music for Festival productions.

Music at the Stratford Shakespearean Festival began in 1953, under the direction of Louis Applebaum, with 16 poorly attended afternoon concerts in the 1,147-seat Tent Theatre. Only one concert, by the Elizabethan Singers (Stratford, Ontario), was presented in 1954. With the move to the 950-seat Concert Hall (a converted badminton court) in 1955, the Festival initiated what was called "The Inaugural Season of Music," presenting Stravinsky's The Soldier's Tale and concerts by Lois Marshall, Isaac Stern, Elizabeth Schwarzkopf, the Hart House Orchestra and Festival Chorus (later the Festival Singers).

The 1956 season included a production of Britten's The Rape of Lucretia featuring Jon Vickers; concerts by the Festival Orchestra, Festival Chorus, and various soloists; and the first of three years of jazz programs, which included a concert in 1956 by Oscar Peterson (recorded on Verve MGV-8024) and two performances by Duke Ellington. Productions in 1957 included another concert by Ellington — a performance of his Shakespearean suite, Such Sweet Thunder, which was broadcast on CBC Radio — as well as the English Opera Group's presentation of Britten's The Turn of the Screw and a concert by the CBC Symphony Orchestra.

Subsequent seasons saw a performance by the Duke Ellington Orchestra for Princess Margaret on 31 July 1958, productions of The Beggar's Opera (1958) and Orpheus in the Underworld (1959), and, significantly, the creation in 1959 of the Orchestra Workshop under the direction of leading chamber musicians, to attract and hold players who would form the National Festival Orchestra. (Master classes, in later years independent of the Orchestra Workshop, continued until 1969 and were revived in 1971.)

In 1960 concerts were presented for the first time in the Festival Theatre, while stage productions included the Gilbert and Sullivan opera H.M.S. Pinafore (1960). Saturday morning chamber concerts were introduced in 1960 and later increased from three to eight per season. An International Conference of Composers and the International String Congress were also held in 1960.

In 1961, two distinguished American musicians who were instructors in the Orchestra Workshop, the cellist Leonard Rose and the violinist Oscar Shumsky, were named in a directorial triumvirate with Glenn Gould (a regular performer at Stratford since 1953) to succeed Applebaum. The Rose-Shumsky-Gould seasons of 1961–64 (and 1965–67 under Shumsky alone) were highlighted by the three players' joint and solo performances, by the continuing expansion of the Festival Concert series, and by the Festival Choral Workshop (1963–65) under Elmer Iseler.

By 1969, the second of Victor Di Bello's two years as musical director, casual concerts proliferated, and full-scale opera had ceased. After 1969, under the direction of Andrée Gingras (1970–73) and Raffi Armenian (1973–76), concerts decreased in number but expanded in range to include jazz performers and leading Canadian folk musicians as well as chamber and recital programs. The Stratford Festival Ensemble (Canadian Chamber Ensemble), founded and conducted by Raffi Armenian, performed regularly from 1974 to 1976.

Special concert programs met a mixed reception. The Music at Midnight (later Night Music) series, presented by the Festival's guest musicians and members of the resident Festival orchestra, flourished from 1969 to 1976 at the Rothman Art Gallery. However, Music For A Summer Day, a notable day-long mini-festival (1972), was dropped after 1973. Although major productions of opera were not resumed, in 1971 the Third Stage (the badminton court again) became the home for chamber opera and experimental productions such as R. Murray Schafer's Patria II: Requiems for the Party Girl (1972), Gabriel Charpentier's Orpheus (1972), Raymond and Beverly Pannell's Exiles (1973, a Stratford commission), Charles Wilson's The Summoning of Everyman (1974), Gian Carlo Menotti's The Medium (1974), Harry Somers'The Fool (1975), Jean Vallerand's Le Magicien (1975), and Richard Strauss's Ariadne auf Naxos (1975).

Berthold Carrière was music director of the Stratford Festival from 1976 to 1983 and again from 1985 to 2007. No productions were mounted in 1976 or the following year. In fact, the 1977 music program was limited to six concerts of pop music. The 1978 season was somewhat expanded and included: an opening gala featuring artists from the Canadian Opera Company and the National Ballet of Canada; a Third Stage production of Bernstein's Candide with Caralyn Tomlin, Ed Evanko and Andrea Martin; concerts by Liona Boyd, Oscar Peterson, and Louis and Gino Quilico; and appearances by Bruce Cockburn and Dan Hill. The 1979 season offered the musical Happy New Year (music of Cole Porter, adapted by Burt Shevelove); jazz concerts by the Gary Burton Quartet, Dizzy Gillespie, the Preservation Jazz Band, and Sarah Vaughan; and concerts by Valdy and Kate and Anna McGarrigle.

The Stratford Youth Choir sang three concerts in the 1980 Festival and provided the chorus for a production of The Beggar's Opera. The choir did not continue after 1980.

In 1981, the Festival began a series of innovative Gilbert and Sullivan productions directed by Brian Macdonald with musical direction by Berthold Carrière, culminating in the productions of The Mikado, Iolanthe and The Gondoliers in 1984. The Mikado toured Britain and New York to favourable reviews. These productions were broadcast by CBC TV (produced and directed by Norman Campbell) and were released on video. A documentary, Musical Magic: Gilbert and Sullivan in Stratford, was produced by the National Film Board. Pirates of Penzance in 1985 was the last in the series, as the Festival's new artistic director, John Neville, decided to mount Broadway musicals instead, including Cabaret (1987), My Fair Lady (1988), Kiss Me Kate (1989), Guys and Dolls (1990), and Carousel (1991).

Opera-type programs were reintroduced in 1990 with performances of Peter Maxwell Davies' Eight Songs for a Mad King and Miss Donnithorne's Maggot, with baritone Thomas Goertz and mezzo-soprano Fides Krucker, respectively. The critically acclaimed Broadway musicals, however, had become a staple of Stratford's diet and had allowed Neville, on retirement in 1989, to present his successor David William with a financially solvent operation. In 1991, the musicals were outdrawing the company's Shakespeare plays and Montreal Gazette critic Jamie Portman wrote, "During his term as artistic director, John Neville publicly expressed his concern about the Festival's growing dependence on big Broadway musicals. He deplored the prospect of a new generation of playgoers who perceive the Festival primarily as a place to see musicals rather than as English Canada's major bastion of classical theatre. These fears are even more valid today."

Broadway musicals, nonetheless, maintained a strong, profitable presence at the Festival. Under artistic director Richard Monette, the Festival presented a number of successful productions, including Richard Ouzounian and Marek Norman's Dracula (selling 44,000 tickets in 1999 and broadcast on CBC TV), Fiddler on the Roof (162,000 tickets sold in 2000), and Guys and Dolls (extended for 12 additional shows in 2004). The Festival's 2005 production of Hello, Dolly! marked the musical's first non-Broadway revival by a professional company. Other popular productions have included Gypsy (1993), The Music Man (1996, 2008), The Sound of Music (2001), My Fair Lady (2002), The Threepenny Opera (2002), The King and I (2003) and Oklahoma! (2007).

With the appointment of Des McAnuff as artistic director in 2007 the Festival renewed its emphasis on classical theatre. Although the future of the musical at Stratford seemed to be in question, McAnuff assured: "Musicals, I believe fervently, are an inherent part of the classical theatre repertoire and they deserve to be treated with great respect.” Musicals after 2007 have included Cabaret (2008), Evita (2010), a critically acclaimed production of Jesus Christ Superstar (2011), 42nd Street (2012), Fiddler on the Roof (2013), Crazy for You (2014) and The Sound of Music (2015).

Reduced in number, classical, jazz, and folk music concerts have also continued at the Stratford Shakespeare Festival. The 1,838-seat Festival Theatre and the 1,083-seat Avon Theatre have remained the main venues for larger productions, while the 260-seat Studio Theatre (built in 2002) has become home to the Festival's Music Workshop Concerts, as well as the "Night Music" series. Concert performers have included Cynthia Dale, Mike Murley, the Festival Youth Singers, the Festival City Big Band, and the Niagara Vocal Ensemble.

In 2007 the Festival's long-time music director, Berthold Carrière, retired and was succeeded by Rick Fox.

Incidental music for Stratford's theatre productions has been commissioned from various composers and performed by the Stratford Festival Theatre Orchestra as required. In addition to composing the Festival's fanfares, a tradition begun in 1953, Louis Applebaum scored more than 75 productions between 1953 and 1999. Berthold Carrière arranged and composed more than 80 works for Stratford between 1975 and 2007, and Gabriel Charpentier some 17 between 1963 and 1981. Organist and composer John Cook resided in London, Ontario from 1954 to 1962, during which time he composed the music for more than 10 plays.

Concert works were commissioned from Serge Garant, Bruce Mather, Gabriel Charpentier, and Steven Gellman (all premiered at the Saturday morning chamber music concerts in 1968); and from John Hawkins, Brian Cherney, and Gilles Tremblay (premiered in 1969). Efforts to popularize the Stratford Shakespeare Festival have led it to commission songs and incidental music from Loreena McKennitt (Merchant of Venice, 2001), the Barenaked Ladies (As You Like It, 2005), and Des McAnuff with Michael Roth (Twelfth Night, 2011).