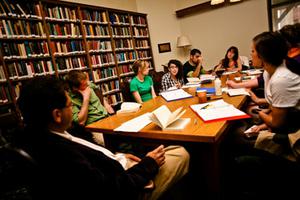 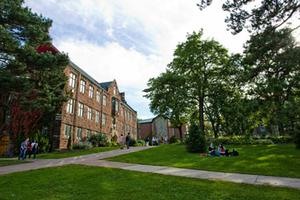 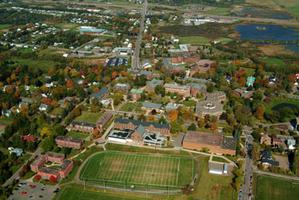 Mount Allison University. United Church-affiliated, non-sectarian university in Sackville, NB. Prior to its incorporation in 1963 its functions had been carried out by three separate but interrelated institutions: the Mount Allison Wesleyan Academy for Boys (1840-1958), the Ladies' College (1854-1958), and Mount Allison College, which was established with degree-granting powers on behalf of the other two in 1862. Most of Mount Allison University's approximately 1850 students in 1990-1 were undergraduates in the liberal arts.

Mount Allison Ladies' College instituted a music program at its inception. In 1874 its first certificates in music, both in piano, were awarded to Ravinia Stewart and Alma Hickman.

The B MUS degree was introduced in 1912 and was awarded first in 1917 to Mary Elsinore Tait. As diploma courses were more popular, the second B MUS degree was not awarded until 1933. In 1923 Mount Allison's Ladies' College became the first Canadian college to broadcast a program of music.

During their long history, the degree programs of the Music Dept have undergone many changes. In addition to the B MUS, there have been the Musical Leadership Diploma (emphasizing public school music, and begun in 1934), a Licentiate in Music (artist's and teacher's), the AMACM (Associate Mount Allison Conservatory of Music), and the BA (music major). Degree programs being offered in 1989-90 were B MUS, BA (concentration in music: honours degree), and B MUS/B ED (five-year integrated program). Mount Allison conferred its first honorary Doctorate of Music (1944) on James Noel Brunton. Honorary doctorates in law were awarded to Alice May Harrison (1954), Alfred Whitehead (1954), Sir Ernest MacMillan (1956), and Helen Creighton (1957), and honorary doctorates in music to Arnold Walter (1966) and to John Beckwith, Francis Chaplin, and Maureen Forrester, the last three on the occasion of the centennial of the first certificate in music conferred at Mount Allison (1974). Student enrolment in the department has been limited to approximately 100. In 1989-90 there were 14 full-time faculty members and 6 part-time. Prominent faculty members have included Carleton Elliott, Doreen Hall, Kelsey Jones, Ethel Peake, Evron Kinsman, Allison Patterson, Stanley Saunders, Michael Miller, Nancy Vogan, Willis Noble, and Janet Hammock.

In 1959 Saunders, in co-operation with the extension department, initiated a summer instrumental music camp, which existed until 1989. The Music Dept in 1962 began conducting annual examinations of extramural (privately taught) music students. In the years following as many as 900 candidates have been entered in a single year. In 1966 the department moved into the newly built Marjorie Young Bell Conservatory building, donated to the university by the dedicatee's husband, Ralph Pickard Bell, Chancellor Emeritus, and containing two classrooms, two rehearsal halls, 14 office-studios, 25 practice rooms, the 370-seat Brunton Auditorium, a radio control centre, a practice organ, an electronic studio, and a piano lab. Two Casavant organs have been installed as part of the department's facilities. The Bell Conservatory also houses the Alfred Whitehead Memorial Music Library, the largest of its kind in the Atlantic provinces, housing 16,000 volumes, scores, and recordings. Another important collection at Mount Allison, the Mary Mellish Archibald Library, is rich in folk music material. The Ralph Pickard Bell Library Publications in Music Series has made several important contributions to musical bibliography, including catalogues of the university's Canadian music holdings, of the folk music holdings in the Archibald Library, and of other special collections. (See entry for Bibliography.)

Recitals, workshops, and collegia musica given by students, faculty members, and visiting musicians have become an integral part of the music program. A performing arts series has continued to present six to eight guest performers of distinction in the Convocation Hall. Student performing groups in 1990 included the Choral Society (which in 1979 joined forces with the New Brunswick Youth Orchestra to present Mendelssohn's Elijah in Saint John, Fredericton, and Sackville), Conservatory Chorale, Symphonic Band, Chamber Orchestra, Jazz Ensemble, Women's Chorus, and Jazz Choir. Many student and faculty performances have been broadcast over CBC radio.