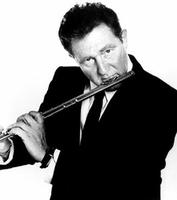 One of Canada's most popular instrumentalists, Koffman began his career as a saxophonist with dance bands in Toronto.

Morris Koffman, "Moe," flautist, saxophonist (b at Toronto 28 Dec 1928; d at Orangeville, Ont 28 Mar 2001). One of Canada's most popular instrumentalists of his day, Moe Koffman began his career as a saxophonist with dance bands in Toronto and, from 1950 to 1955, New York (Sonny Dunham, Jimmy Dorsey, etc). His recording on flute of his "Swinging Shepherd Blues" in 1957 was an international hit; the tune itself has been recorded by more than 300 other artists.

Moe Koffman subsequently became a major figure in Toronto's jazz, studio and theatrical worlds as a player and a contractor. His jazz band, a fixture at the Toronto restaurant George's Spaghetti House from 1956 to 1994, toured widely in Canada and appeared in concert abroad, on occasion in the 1980s presenting the noted US trumpeter Dizzy Gillespie as a guest soloist. Koffman also played in other Toronto jazz bands, notably Rob McConnell's Boss Brass.

Koffman's recordings (more than 25 albums) combined versatility with a sure commercial instinct. Some were of a pop instrumental nature, drawing on repertoire and styles from the classical (Moe Koffman Plays Bach, 1971) and disco (Jungle Man, 1976) to stage musicals (Music for the Night: A Tribute to Andrew Lloyd Webber, 1991). Others were more strictly jazz, including One Moe Time (1986) and Oop-Pop-A-Da (1988), the latter with Gillespie.