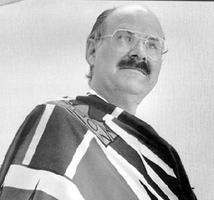 Michael Franklin Harcourt, lawyer, premier of British Columbia (b at Edmonton 6 Jan 1943). Harcourt studied law at the University of British Columbia, where he was active in protests during the 1960s against US involvement in the Vietnam War. He founded and became the first director (1969-71) of the Vancouver Community Legal Assistance Society, reputedly Canada's first community law office, and advised then Minister of Justice John Turner on how to set up similar storefront law offices across the country. Over the next 2 decades, during which he served as alderman (1972-80) and mayor (1980-86) of Vancouver, Harcourt developed his moderate social democratic convictions. A popular and effective civic politician who claimed Tommy Douglas as his mentor, Harcourt made a successful shift to provincial politics in 1986 as a New Democrat and was chosen leader of the party in 1987.

During the next few years in Opposition, the NDP witnessed the self-destruction of the Social Credit regime of William VANDER ZALM amid controversy and scandal. Harcourt worked to counter the public perception in the province that an NDP government would be anathema to business and economic stability. The NDP swept to power in October 1991 with 51 of 75 seats in the legislature, and Harcourt became the province's 30th premier on 5 Nov 1991.

Harcourt's government seemed immune to the scandals that plagued Ontario's NDP government under Bob RAE, and BC remained one of the few areas of economic growth in the country. Harcourt was able to achieve much of his legislative agenda until the Bingogate scandal erupted in 1994. Although Harcourt had no direct involvement in the scandal, he became the focus of public wrath, and under intense pressure he announced his resignation in November 1995.

Shortly after, Harcourt continued his interest in urban planning, basing his research studies at the University of British Columbia (UBC) and continuing to serve as a special advisor to the federal government in the area of urban sustainability, a position he held until 2004. In 2002 he sustained a serious back injury after a fall at his cottage. After months of therapy he made a near-full recovery, which he documented in his 2004 book Plan B: One Man's Journey from Tragedy to Triumph. In 2009 he was chosen to lead UBC's new Continuing Studies Centre for Sustainability as its associate director.