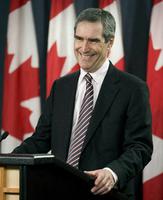 Former Liberal leader Michael Ignatieff speaks with the media during a news conference in Ottawa following his appointment as interim leader on 10 Dec 2008 (photo by Adrian Wyld, courtesy CP Archives).

Michael Grant Ignatieff, writer, broadcaster, professor, politician (born 12 May 1947 in Toronto, ON). Ignatieff distinguished himself internationally as an award-winning academic, commentator and author. He returned to Canada and entered politics, serving as Liberal Leader and Leader of the Official Opposition from 2008 to 2011. In the 2011 federal election, Ignatieff led the Liberal party to a crushing loss in which Stephen Harper's Conservative Party formed a majority and Jack Layton’s NDP formed the new Official Opposition.

Michael Ignatieff is the scion of two distinguished families. He is a grandson of Count Paul Ignatieff, Imperial Russia's last minister of education, and Princess Natalie Mestchersky. Through his mother, Alison, he is a descendent of two principals of Upper Canada College (grandfather William Lawson Grant and great-grandfather George Parkin) and one principal of Queen's University (great-grandfather George Monro Grant). Philosopher George Parkin Grant was his uncle.

Ignatieff's early childhood was spent in New York, Washington, Belgrade, and London, the capitals where his father, Canadian diplomat George Ignatieff, was posted. The young Ignatieff completed his secondary schooling at Upper Canada College before going to the University of Toronto, where he received a bachelor's degree in history in 1969. In 1976, Ignatieff received a PhD in history from Harvard, with a thesis on the British prison system during the industrial revolution. After two years teaching at the University of British Columbia, he accepted a research fellowship at King's College, Cambridge.

Ignatieff left the university in 1984 to work as a writer and broadcaster in London, England. Over the next two decades, he became one of the leading public intellectuals in the English-speaking world. He was the host of Thinking Aloud and The Late Show, talk shows broadcast on BBC television. He was a weekly columnist with the London Observer and wrote for other major periodicals, including The New Yorker, The Financial Times, The Guardian, Dissent, and The New York Times Magazine.

Ignatieff wrote several volumes of fiction and non-fiction. The Russian Album (1987), in which he traced the history of four generations of his family, won a Governor General's literary award in Canada. His highly-praised novel Scar Tissue (1993) told the story of a woman suffering from dementia from the point of view of the son who cared for her. Again, there was an element of family history: Ignatieff's own mother, Alison, had suffered from Alzheimer's and his brother Andrew had looked after her. Blood and Belonging: Journeys into the New Nationalism (1993) and Virtual War: Kosovo and Beyond (2000) both won major awards. Isaiah Berlin: A Life (1998), a gracefully-written biography of the liberal philosopher, won widespread acclaim.

Ignatieff left Britain in 2000 to take up a position as director of the Carr Centre for Human Rights Policy at Harvard. He endorsed the US-led invasion of Iraq in a 2003 article in the New York Times Magazine, arguing that war was a legitimate last resort to prevent the proliferation of weapons of mass destruction and to end the tyranny of Saddam Hussein, a position he repeated in Empire Lite: Nation-Building in Bosnia, Kosovo, and Afghanistan (2003).

After living abroad for most of the past 36 years, Ignatieff returned to Canada in 2005 to become visiting professor in human rights policy at the University of Toronto and senior fellow at the university's Munk Centre for International Studies. He won the federal Liberal Party's nomination in Etobicoke-Lakeshore and was elected to Parliament in January 2006. Just three months later, Ignatieff became a candidate for his party's leadership. As the front-runner, he quickly came under attack, criticized for his long absence from Canada and for having supported the American war in Iraq. Opponents also claimed that Ignatieff supported torture, pointing to 2004 writings in which he argued that "coercive interrogations" might be necessary on occasion "to defeat evil." Ignatieff vehemently denied the allegation, insisting he was opposed to torture. At the leadership convention in December 2006, Ignatieff placed second to Stéphane Dion, who quickly appointed the runner-up as deputy leader.

Ignatieff backed away from his support for the Iraq war in an August 2007 article in the New York Times Magazine. His original position, he said, was based in part on emotions born of a 1992 trip to Iraq, where he saw the brutal way Saddam had treated his country's Kurdish population.

After the Liberal defeat in the federal election of October 2008, Dion stepped down as leader. Ignatieff was appointed to the position on an interim basis until he was acclaimed leader at the Liberal convention in the spring of 2009. The party did little to defend him against Conservative television advertisements that emphasized his long periods abroad by telling Canadians that he was "just visiting" and "he didn't come back for you."

In March 2011, despite trailing the Conservatives by almost 10 points in public opinion polls, the Liberals combined with the other opposition parties to defeat the Harper government in the Commons and force an election. In the early days of the campaign, Ignatieff appeared to be closing the gap that separated the Tories from the Liberals. The turning point in the campaign came with the televised debates. Harper was calm and composed, undermining opposition efforts to portray him as an authoritarian leader obsessed with control. For his part, Ignatieff was overshadowed by NDP leader Jack Layton, who was both good natured and vigorous in his attacks on the prime minister. A few days after the debate, polls began showing that Liberal support was falling. On election day, 2 May, Ignatieff lost his seat, and his party was reduced from 77 seats to 34, putting it at third spot in the Commons after the majority Tories and the NDP, which would now form the official opposition. The next day, Ignatieff announced he would step down as leader. Shortly afterward he accepted a position at the University of Toronto's Massey College.