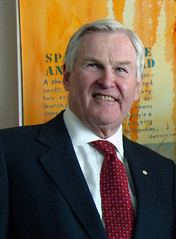 Michael Wilson at the Canadian Embassy in Washington, D.C., United States (24 March 2009). Wilson served as the Canadian Ambassador to the United States from 2006 until his replacement by Gary Doer in 2009. Prior to his diplomatic career, Wilson was a Bay Street investment executive in Toronto when he was elected to the Canadian House of Commons as a Progressive Conservative Member of Parliament in the 1979 general election. He served as a Minister in various portfolios in the governments of Joe Clark and Brian Mulroney. (courtesy National Guard Bureau/Wikimedia CC)

Michael Wilson was brought up in Toronto's comfortable Rosedale district and attended Upper Canada College and the University of Toronto, graduating with a degree in commerce in 1959. In 1961, he joined the investment firm of Harris and Partners Ltd; apart from two years in the Department of Finance (1964–66), he remained in the Toronto investment business for 18 years, becoming executive vice president of Dominion Securities (1973–79).

Wilson was elected to the House of Commons as Conservative Member of Parliament for Etobicoke Centre in 1979, and was minister of state for international trade in the short-lived government under Joe Clark. He ran for the leadership of the Progressive Conservative Party in 1983; disappointed by his first-ballot showing, he threw his support to Brian Mulroney. He became minister of finance in 1984. Astute, solid and hard-working, he was widely regarded as one of the most successful Cabinet ministers in the Mulroney government.

Wilson was also instrumental in the Conservatives' attempt at reforming Canada's taxation structure and in the negotiations for the loosening of trade barriers between Canada and the United States. His most controversial act as finance minister was the introduction in 1990 of the Goods and Services Tax (GST). The government had to invoke an obscure section of the Constitution Act allowing the appointment of extra senators to get it through the upper house.

In 1991, Wilson left finance to become minister of industry, science and technology, and minister for international trade, a new super ministry aimed at increasing Canada's competitiveness. In 1991–92, he helped negotiate a new free-trade deal with the US and Mexico. (See NAFTA and Free Trade.)

In 2006, Prime Minister Stephen Harper appointed Michael Wilson the Canadian ambassador to the United States. He remained in this post until 2009.

Michael Wilson was also a passionate advocate for mental health and was devoted to ending the stigma associated with mental illness. In the early 1990s, his son Cameron developed severe depression and in 1995 committed suicide. Following his son’s death, Wilson became involved with such groups as the Centre for Addiction and Mental Health, the NeuroScience Canada Partnership and the Mental Health Commission of Canada. His advocacy was publicly recognized in 2010 when he was promoted to Companion of the Order of Canada: “Throughout Canada and beyond, Michael Wilson has championed understanding, acceptance and support for those with mental illness. A highly respected advocate, he has raised awareness, at both the corporate and community levels throughout North America, of the social and economic costs of mental illness.”