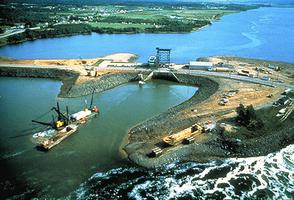 The term "megaproject" was already inappropriate when, in the early 1970s, it was first applied to very large capital projects such as the JAMES BAY PROJECT and the Syncrude oil-sands project in northern Alberta. "Mega" denotes a factor of millions; in fact, the proper prefix for Canada's giant ENGINEERING schemes of the 1970s, 1980s and 1990s would have been "giga" (ie, billions) because their common characteristic was a price tag of billions of dollars. In the energy field alone, construction of major projects costing more than $200 billion was initially planned in Canada during the 1980s but the majority were cancelled, scaled down or deferred indefinitely. A single offshore oil-production platform may carry a price tag of billions of dollars.

The Concept of Megaprojects
The whole concept of "megaprojects" was thrown into question when the long list of megaprojects proposed in the 1970s was wiped out by the recession and the decline in energy prices during the 1980s. Megaprojects can only thrive in an atmosphere of certainty. Ten-year, 20-year or even 50-year commitments involving billions of dollars and thousands of man-years can only be undertaken with assured finances, good product demand, a supportive political environment and fail-safe technology. Without this certainty, megaprojects can easily become white elephants.

Canada is a huge country blessed with a great wealth of natural RESOURCES - the ideal environment for megaprojects. Its history is often told as a sequence of what were, in the context of their times, megaprojects: Ontario's WELLAND CANAL and RIDEAU CANAL; the CANADIAN PACIFIC RAILWAY and CANADIAN NATIONAL RAILWAYS; the war mobilizations; the HYDROELECTRIC systems; the TransCanada and West coast natural-gas PIPELINES; the Interprovincial and TransMountain oil pipelines; the TRANS-CANADA HIGHWAY and ALASKA HIGHWAY; the ST LAWRENCE SEAWAY; the Canadian deuterium-uranium (CANDU) nuclear reactors; and the Syncrude oil-sands project. All were built for one or more of 3 overriding national purposes: transportation, energy or defence.

Design for a Distant Future

In addition to mere size and scope, megaprojects involve a long-term perspective that often verges on crystal-ball gazing. Megaprojects are usually designed for a future that will not begin for 5-10 years and will extend for a further 25-30 years. Moreover, the megaproject usually does not enter the economic system gradually but represents a quantum leap in productive capacity. Hence, there must be a huge, unsatisfied demand to be met when the project begins operation, or the project must meet old demands more cheaply and efficiently. Old suppliers (eg, clipper ships around Cape Horn, imported oil, oil-fired electrical plants) are abruptly displaced by the arrival of a railway, heavy-oil plant or massive hydroelectric development.

The earliest and most persistent critics of major projects are usually accountants. Even proposing a project carries substantial financial risk: the Canadian Arctic Gas consortium spent over $100 million before its MACKENZIE VALLEY PIPELINE was rejected in 1977; the Alsands group spent a similar amount before indefinitely deferring the oil-sands venture in 1982. In Canada, where the long-term real return on capital has averaged 7%, investors want a potential profit at least 7% higher than the expected rate of inflation. Hence, investors require assurances from governments about tax rules, prices and regulations that will apply. Governments have a parallel concern that the social benefits of a project exceed its social costs, and that the same benefits (eg, oil supply, transportation, employment) could not be obtained more cheaply by other means. For example, megaprojects are generally built in the hinterland but benefit metropolitan centres - sometimes out of the province or even out of the country (see CHURCHILL FALLS). Governments must judge whether the boom-and-bust trauma suffered by remote regions is worth the benefit to the industrial heartland.

The calculations of "opportunity cost" and "benefit/cost" are intimately entwined with the basic economics of the projects themselves. During the 1970s the inflation rate for energy projects was a daunting 1.5 times greater than the general rate. With the recession of the early 1980s came the concern that there might not be a demand for the megaproject's high-priced production when it eventually came to market. Forecasts of annual energy-demand growth in Canada were reduced from as high as 7% to around 2%, with some predictions of zero or negative growth rates for many years. Consequently, several projects were shelved.

Notable megaprojects that went ahead in the 1980s and 1990s included the James Bay hydroelectric project in northern Québec, the Darlington nuclear power plant in Ontario, the twinning of the Canadian Pacific Railway tracks through the Rockies, the Confederation Bridge between PEI and New Brunswick, the Tumbler Ridge coal mine and associated railway in BC, major PETROCHEMICAL plants in Alberta, a heavy oil upgrader at Lloydminster on the Alberta-Saskatchewan border, new natural gas pipelines from Alberta to the US, the Hibernia oil production platform off Newfoundland and a smaller offshore oil production facility off Nova Scotia. A major offshore production and pipelining project in Nova Scotia, the Sable Offshore Energy Project, is scheduled to begin delivering natural gas to Nova Scotia, New Brunswick and New England in late 1999. The Terra Nova oil production project offshore Newfoundland is expected to begin production in 2000. In 1997 and 1998, oil companies announced various plans totalling $20 billion to expand or develop Alberta oil sands and heavy oil resources in the following decade.

However, many megaprojects were cancelled or delayed indefinitely. These included oil and natural gas pipelines from the Arctic, facilities in British Columbia and the Northwest Territories to liquefy natural gas for shipment to Japan and Europe, natural gas production off Nova Scotia, gas pipelines in the Maritimes, synthetic fuels from Cape Breton coal, TIDAL ENERGY projects in the Bay of FUNDY, NS, and additional CANDU nuclear plants in Québec and New Brunswick. The economies of all these proposals suffered when energy demand failed to grow as expected, when alternative sources were able to meet the needs more cheaply and when the 50% drop in world oil prices in 1986 pulled down the price of all energy resources. As governments became concerned about their rising debt load, they also became less willing to invest public funds in economically risky megaprojects. The notable exception was the $6-billion Hibernia project, which began production in 1998. The federal government decided to support on grounds of social benefit to economically distressed Newfoundland. However, subsequent East Coast offshore oil and gas projects, like the planned oil sands developments, are proceeding without direct government investment.

Megaprojects attempt to take advantage of "economies of scale"; ie, the larger a facility, the lower its unit cost of production. This was the conventional wisdom for generations of engineers and economists, but much of its validity rests on an assumption of financial, economic and political stability. Amid the uncertainties of the 1980s the tenet was re-examined critically and found wanting for a number of reasons.

First, a very large project is vulnerable to malfunction. Thus, it would be unwise to depend too much on one technology (eg, CANDUs) that might be shut down completely by some hidden flaw or hazard. The Syncrude project, for example, was plagued in its first years by fires, freezeups, breakdowns and accidents that abruptly halved its output. The smaller, older Suncor oil-sands plant also suffered major shutdowns as recently as 1987. Second, many projects today can be built in stages, or modules, with a continuing labour force and design improvements as mistakes are found in earlier models. Cash flow from the first units can help pay for subsequent ones, substantially reducing the financial risks, and the timing of additional units can be altered to match shifts in price, demand and competition. Third, the regulatory process is simpler and quicker for smaller projects. Fourth, some technologies (eg, in situ oil-sands extraction, high-pressure oil processing) are not notably cheaper on a huge scale.

Imperial Oil Ltd adopted the modular approach for development of oil sands at Cold Lake after abandoning plans for a $12-billion megaproject. Cold Lake has been built up in 12 stages, with production in 1997 actually exceeding the planned 125 000 barrel/day of the original project, at a fraction of the cost. Instead of upgrading the bitumen into synthetic crude oil, Imperial dilutes it with condensate (a gasolinelike byproduct of natural gas production) for shipment by pipeline to refineries. The refineries have added upgrading facilities, in modular fashion, to handle the increasing amounts of heavy oil from western Canada. Imperial's modular approach, which is well-suited for in situ bitumen extraction, is also being followed by other oil-sands developers such as Amoco Canada Petroleum Company Ltd, Koch Exploration Ltd, and Shell Canada Ltd.

The existing oil-sands megaprojects, Syncrude and Suncor, meanwhile adopted new technologies (truck-and-shovel mining, hydro-transport from mine to upgrader, and hydro-cracking in the upgrader) that allow them to operate more reliably and efficiently. These technologies also make it possible for the existing projects to expand in modular fashion. By 1995, Syncrude's annual output had grown from the initial capacity of 125 000 barrels/day to 200 000 b/d and further expansions to 300 000 b/d are anticipated early in the 21st century. Suncor had grown from 40 000 b/d to 70 000 b/d, with planned expansion to 100 000 b/d.

Oil-sands development has continued, in modified form, because conventional oil production in Canada and the US has been declining, guaranteeing a demand for the projects' output so long as the price remains competitive with imported crude oil. Other types of megaprojects such as nuclear plants and hydroelectric dams have suffered because demand failed to grow as expected, and competitors such as natural gas-fired cogeneration were able to meet the demand more cheaply. Many companies are hedging their bets on megaprojects; eg, "prebuilding" the profitable southern portion of the proposed Alaska Highway gas pipeline and postponing indefinitely the riskier $40-billion northern portion.

In retrospect, many technologies go through a dinosaur age, an era of eventually untenable gigantism, followed by a focus on smaller, more manageable ventures. If governments remain unwilling to share financial risks, it seems certain that fewer megaprojects will be built in the future than in the past.