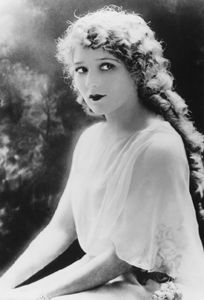 Mary Pickford, née Gladys Louise Smith, actor, producer and writer (born 8 April 1892 in Toronto, ON; died 29 May 1979 in Santa Monica, California). Pickford was a pioneering figure of early cinema who became one of the most renowned stars of the silent film era. She was a trailblazer for women in the motion picture industry.

Mary Pickford was the eldest child of Charlotte (née Hennessey) and John Charles Smith. She had a sister, Charlotte (Lottie) (1893–1936); and a brother, John (Jack) (1896–1933). At about the age of four, she fell ill with diphtheria, and was baptized by a Roman Catholic priest and her middle name was changed to Marie. John Smith died in 1898, apparently from a head injury suffered in a fall, leaving his family almost destitute. In need of money, Charlotte rented a room to a stage manager of the Cummings Stock Company of Toronto. He suggested that Charlotte cast her young daughters in a play. Pickford made her stage debut with the Valentine Stock Company in 1898 in Bootle’s Baby. In 1900, she performed at Toronto’s Princess Theatre. She played two parts, a boy and a girl, in The Silver King by Henry Arthur Jones and Henry Herman . That led to further roles in Toronto theatres. The following year, the whole family joined a touring theatrical troupe. In 1907, they joined the David Belasco Theatre Company in New York. At Belasco’s suggestion, Gladys changed her name to Mary Pickford, a combination of her own middle name and that of her maternal grandfather, John Pickford Hennessey. Charlotte, Lottie and Jack also adopted the name Pickford. That year, Pickford began her long run in William de Mille’s hit play The Warrens of Virginia at the Belasco Theatre on Broadway.

In 1909, Pickford sought work in the new medium of motion pictures. She made her first cinematic appearance in the American Mutoscope and Biograph Company’s short film Her First Biscuits, directed by D.W. Griffith. She signed with the Biograph Company at $10 a day, and was given her first starring movie role in The Violin Maker of Cremona. It was quickly followed by They Would Elope.

In January 1910, Pickford went with Biograph to California, where she continued to make films directed by Griffith. By this time, Pickford was attracting the attention of audiences and critics. Although Pickford was only slightly more than five feet tall, her feisty characters dominated the screen. She had an instinctive understanding of how to play for the camera as opposed to a live theatre audience. Unlike the many stage actors who failed to make the transition to cinema, Pickford moved to the vanguard of performers who fused psychological realism with silent film’s balletic gesture. The result was an unprecedented intimacy between the actor on the screen and the movie theatre audience. This new relationship, sparked by Pickford’s acting genius and her onscreen image as a comic spitfire, triggered a Mary Pickford craze that grew more intense with the advent of feature films that were more than an hour long.

When popular star Florence Lawrence left Biograph in 1910 to join Carl Laemmle’s Independent Moving Picture Company (IMP), Pickford replaced her as “The Biograph Girl.” But within the year she broke with Biograph and signed with IMP. In 1911, Pickford married actor Owen Moore. He was her leading man that year in Their First Misunderstanding.

Between 1912 and 1919, Pickford made films for several studios, working with such directors as Griffith, Owen Moore, Mack Sennett, Wilfred Lucas and Cecil B. DeMille. Among the dozens of films in which Pickford starred during this period were The Informer (1912), The Unwelcome Guest (1913), Cinderella (1914), Madame Butterfly (1915), The Foundling (1916), Rebecca of Sunnybrook Farm (1917), Poor Little Rich Girl (1917), Stella Maris (1918) and The Hoodlum (1919). She also formed her own production company, and on some projects contributed as a scriptwriter. In the winter of 1912–13, Pickford took a temporary leave from filmmaking to star in Belasco’s Broadway production of Rosamund Gerard and Maurice Rostand’s play A Good Little Devil.

In February 1919, Pickford, Griffith and film stars Douglas Fairbanks and Charlie Chaplin officially formed United Artists Corporation in order to maintain greater financial and artistic control over their productions. Pickford established the Mary Pickford Company, which produced films exclusively for distribution by United Artists. Her first movie made under the new arrangement, Pollyanna (1920), grossed over a million dollars.

In March 1920, Pickford divorced Moore on the grounds of desertion. Later that month, she married Fairbanks and became an American citizen. They moved into a Beverley Hills mansion they called “Pickfair.” Hollywood’s most glamorous couple had a European honeymoon and was mobbed by fans in London and Paris.

Pickford was now at the height of her acting career and made some of her most memorable films: Little Lord Fauntleroy (1921), Tess of the Storm Country (1922), Rosita (1923), Dorothy Vernon of Haddon Hall (1924), Little Annie Rooney (1925) and Sparrows (1926). In 1921, Pickford was a co-founder and first vice-president of the Motion Picture Relief Fund, which provided financial assistance for film industry employees in need. Jack and Lottie Pickford also had success as movie actors, but they never reached the same level of fame as Mary.

In May 1926, Sid Grauman’s Egyptian Theatre in Hollywood made movie history by featuring a double premiere: Pickford’s Sparrows and Fairbanks’ The Black Pirate, in which Pickford made an uncredited cameo appearance. In 1927, Pickford and Fairbanks were the first stars to make imprints of their hands and feet in cement in the forefront of Grauman’s Chinese Theatre. That year, they were among the 36 founders of the Academy of Motion Picture Arts and Sciences (known for the Academy Awards, or “The Oscars”). Fairbanks was elected its first president.

In 1927, Pickford co-starred with Charles “Buddy” Rogers in My Best Girl. It was her last silent movie. The enormous success of the first “talking picture,” The Jazz Singer, starring Al Jolson, marked the end of the silent film era.

Pickford lost her mother to cancer in 1928. Overcoming grief and an initial ambivalence toward the new medium of sound, she starred in Coquette (1929), for which she received the Academy Award for Best Actress. That year, Pickford was also in The Taming of the Shrew, the only film in which she and Fairbanks co-starred. It failed at the box office.

Pickford’s final major screen appearance was in Secrets (1933). It opened the same week President Franklin D. Roosevelt ordered a temporary closure of the banks as a measure to fight the Great Depression. Like all other films released that week, Secrets did poorly at the box office. Now past the age at which she could play the perky young heroines that had endeared her to audiences, Pickford retired from acting. However, she was still active as a producer.

Pickford separated from Fairbanks in 1933 on grounds of infidelity and eventually divorced him. In 1934, Pickford published a novel, The Demi-Widow, written with the assistance of Belle Burns Gromer. She also wrote Why Not Try God?, a booklet promoting Christian Science. A similar booklet, My Rendezvous With Life, would follow a year later.

In May 1934, Pickford made a triumphant return to her hometown of Toronto. She was given an official civic reception, and crowds of fans jammed the downtown streets. Pickford was presented with a gold Centennial medal, and in a speech in which she paid homage to her parents, she said, “I am proud to be a Canadian.”

Pickford engaged in business enterprises such as Mary Pickford Cosmetics, was co-founder of the Society of Independent Motion Picture Producers, and established the Mary Pickford Charitable Trust, later renamed the Mary Pickford Foundation. But in her declining years she became reclusive and was plagued by alcoholism and depression. Her participation in 1953 in the first television broadcast of the Academy Awards was one of very few public appearances. In 1976, Pickford did not attend the Academy Awards ceremony to receive an honorary lifetime achievement Oscar. She accepted the award from Pickfair.

Stating that she “wished to die as a Canadian,” Pickford successfully applied to reclaim her Canadian citizenship. At the time of her death from a stroke, she held dual Canadian-American citizenship. Mary Pickford is recognized internationally as a dynamic and iconic figure in the history of cinema. In Toronto she is honoured with a bust and a plaque at the Hospital for Sick Children, which now occupies the site of her birth, and with a star on Canada’s Walk of Fame.