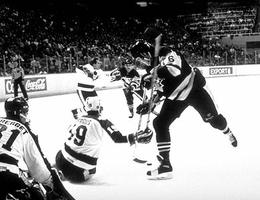 Mario Lemieux's brilliant hockey career was interrupted in 1994 by injury and illness.

Mario Lemieux, hockey player (born at Montréal, 5 Oct 1965). Mario Lemieux grew up in Montréal, near the famous Forum, where the Canadiens played until 1996. He was an outstanding hockey player at every level that he played. As a junior with the Laval Voisins, he broke the scoring records of his idol, Guy Lafleur. Drafted by the Pittsburgh Penguins in 1984, he scored on his first shift in the NHL. He went on to score 100 points that season and won the Calder Trophy for best rookie.

It was inevitable that Lemieux would be compared with Wayne Gretzky, the greatest player of his day. Lemieux chose to wear number 66, a modest reference to Gretzky's 99. When asked about Gretzky, Lemieux replied, "I think I can pass him. Not this year or next, but it will happen." In 1987 the 2 played together in the Canada Cup tournament. Lemieux scored 11 goals in 9 games. Gretzky had assists on 9 of his goals and made the pass that set Lemieux free to score the tournament-winning goal.

In the 1987-88 season it seemed that Lemieux had finally emerged from Gretzky's sovereign shadow. He won the scoring race and was awarded the Hart Trophy for most valuable player. The following season he scored 85 goals and 114 assists, the second-highest scoring record in NHL history. The Hart Trophy, though, went to Gretzky. It was the beginning of a series of disappointments and setbacks that would shorten Lemieux's career. He missed 21 games in the 1989-90 season due to a herniated disc in his back. After back surgery he missed the first 50 games in the following season. He suffered another shocking setback in 1992 when he was diagnosed with Hodgkin's disease. Despite missing many games while undergoing treatment, he still won the scoring title that season, claimed his second Conn Smythe Trophy, and led the Pittsburgh Penguins to their second Stanley Cup.

Never fully recovering from his back injury, he sat out the entire 1994-95 season. Though he again sat out many games in 1995-96, he battled back to win his fifth NHL scoring title.

In 1997 Lemieux announced his retirement. When he left the game, he was still at the top in scoring, and was one of only a few elite players who were immediately inducted into the Hockey Hall of Fame without having to wait the customary three years after retirement. In November 1997 his number 66 was ceremoniously retired in Pittsburgh's Civic Arena, making him the first Pittsburgh Penguins player to achieve this honour. By 1999 Lemieux was owed millions in deferred salary by the Penguins, a team marred by financial difficulty and facing possible transfer out of Pittsburgh; he stepped in as the head of an ownership group that purchased the team, subsequently becoming its president and CEO.

Lemieux's retirement was short-lived. In December 2000 he emerged from retirement and became one of only three hockey players to be an Honoured Member of the Hockey Hall of Fame while still playing in the NHL, alongside Gordie Howe and Guy Lafleur. Although plagued by additional injuries, Lemieux led the victorious Canadian Olympic hockey team as captain at the Salt Lake City Olympic Games in 2002 (a feat that had eluded the men's hockey team since the Edmonton Mercurys won gold in 1952).

Lemieux's Penguins, however, continued to struggle during the three seasons that followed, limited by the increasing costs of players' salaries and hampered even further when Lemieux was forced to trade away several star players to preserve the team's financial stability. The players' salary cap resulting from the 2004-05 NHL lockout alleviated the problem for many teams but not for the flailing Penguins, whose owners began to entertain offers for the team in 2006. Lemieux, faced with a newly diagnosed heart condition, chose 2006 as the last year of his career, officially retiring in January, though he continues to co-own the team with US businessman Ron Burkle. In 2009 the Penguins won the Stanley Cup for the first time in 17 years.

In 2007 Lemieux founded a charitable organization, Athletes for Hope, along with several other prominent North American athletes including Andre Agassi, Muhammad Ali, Lance Armstrong and Cal Ripken, Jr. The organization promotes the involvement of professional athletes in a variety of philanthropic endeavours.

Lemieux's playing career concluded with a total of 1723 points, of which 690 were goals and 1033 were assists in a total of 915 regular season games. He helped the Penguins win 2 Stanley Cups, and personally amassed 3 Hart trophies, 6 Art Ross trophies, and 2 Conn Smythe trophies. In 2009 Lemieux was made an Officer of the Order of Canada. Despite the chronic illness and injuries that plagued most of his career, Lemieux's exceptional offensive skills and record-setting statistics render him one of the top 10 greatest-ever hockey players.