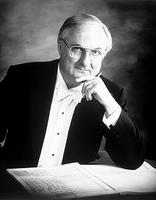 Mario Bernardi, conductor (born at Kirkland Lake, Ontario 20 Aug 1930, died in Toronto 2 June, 2013). Considered the leading Canadian-born conductor of his generation, Bernardi has appeared widely in Canada and abroad. A career as pianist and accompanist, begun after study in Italy and Toronto, gradually gave way to conducting, following his CANADIAN OPERA COMPANY debut in 1957. He conducted opera extensively in Canada before becoming a musical director of the Sadler's Wells Opera Company in London (1966-68). Subsequently he conducted operas in many renowned houses including the Metropolitan of New York, Royal Opera House at Covent Garden, Houston, Wolftrap, and Santa Fe.

First conductor of the NATIONAL ARTS CENTRE Orchestra, formed in Ottawa (1968), Bernardi created a disciplined, finely balanced ensemble, internationally praised for sensitive playing and transparent sound. For the National Arts Centre's summer Opera Festival (1971-82) he was the artistic director for more than 20 operas. Leaving Ottawa, he was conductor of the CBC Vancouver Orchestra (now the CBC Radio Orchestra) from 1983 to 2006, recording over 30 disks with them. Music director of the CALGARY PHILHARMONIC from 1984 to 1992 and then its Conductor Laureate, he greatly expanded that orchestra's repertoire, programming much more contemporary music while building one of Canada's best ensembles. Bernardi continues his international career as a freelance conductor. He has conducted at many of the world's most prestigious opera houses, including the Metropolitan Opera, San Francisco Opera and English National Opera. He was named a Companion of the Order of Canada in 1972. The National Arts Centre Orchestra appointed him Conductor Laureate in 1997. In 1999 he received the Jean A. Chalmers National Music Award and the National Arts Centre Award. Two years later he was honoured with the Governor General's Performing Arts Award. To recognize his great achievement as an opera conductor, he received one of the Rubies, given by Opera Canada in 2004. Having received honorary doctorates from seven universities, Bernardi became a Fellow of the ROYAL SOCIETY OF CANADA in 2006. In 2008 he continues to accept guest conducting engagements around the world.