Marie-Madeleine Jarret de Verchères (born 3 March 1678 in Verchères, Quebec; died August 1747 in Sainte-Anne-de-la-Pérade, Quebec). Madeleine de Verchères is best known for her role in the defence of Fort Verchères in New France in 1692. She is remembered as a military heroine, and her image became part of efforts to recruit Canadian women for wartime work during the First and Second World Wars.

Marie-Madeleine Jarret de Verchères (born 3 March 1678 in Verchères, Quebec; died August 1747 in Sainte-Anne-de-la-Pérade, Quebec). Madeleine de Verchères is best known for her role in the defence of Fort Verchères in New France in 1692. She is remembered as a military heroine, and her image became part of efforts to recruit Canadian women for wartime work during the First and Second World Wars.

Madeleine de Verchères was the fourth of 12 children of François Jarret de Verchères and Marie Perrot. Her father arrived in New France in 1665 as an ensign in the Carignan-Salières Régiment, an 1,100-person French military detachment sent by King Louis XIV to defend New France in the Iroquois Wars. This was a series of conflicts between the French and Iroquois for land and resources that lasted from the 1640s to 1701.

In 1672, François Jarret received a 120-acre seigneury on the south shore of the St. Lawrence River, called Verchères (now a suburb of Montreal). The intendant of New France, Jean Talon, granted Jarret the seigneury in recognition of his military service. As hostilities with the Iroquois were ongoing, he constructed a small wooden fort to protect his home and family and the 11 tenant censitaire families who lived on the seigneury. Despite this protection, his son Antoine and two sons-in-law were killed in conflicts with the Iroquois.

The Defence of Fort Verchères

On 22 October 1692, 14-year-old Madeleine was at Verchères with her younger siblings while her parents were away on business, purchasing supplies for the winter. She was working in the garden near the fort when there was a surprise Iroquois raid. Some of the men working in the fields were killed or captured.

Madeleine later wrote about her narrow escape from the raiders. She ran to the fort, untying her scarf (or “kerchief”) when an Iroquois warrior grasped it. Once she had closed the gates, she said, “I went up on the bastion where the sentry was…I then transformed myself, putting the soldier’s hat on my head, and with some small gestures tried to make it seem that there were many people, although there was only this soldier.” Madeleine fired the cannon and shot firearms from various points in the fort. Although there were only children, an elderly man and a couple of soldiers, she made it appear as though there were many armed men inside the fort.

After eight days, reinforcements arrived in Verchères and Madeleine gave command of the fort to Lieutenant de La Monnerie: “Monsieur, you are indeed welcome. I surrender arms to you.” The governor of New France, Louis de Buade, Comte de Frontenac, did not mention Madeleine in his report of conflicts with the Iroquois that year, noting only that “the enemies killed and took prisoner some people at Verchères.”

When King Louis XIV wrote to Intendant Jean Bochart de Champigny to verify Madeleine’s claims, Champigny assured the king that “what the daughter of the Sieur de Verchere claims in the letter that she gave herself the honour to write to Madame the Countess of Pontchartrain [de Maurepas] is true.” In 1701, both Madeleine and her widowed mother were granted pensions.

In September 1706, 28-year-old Madeleine de Verchères married Pierre-Thomas Tarieu de La Pérade, the son of Thomas de Lanouguère, a colonial administrator, and Marguerite-Renée Denys. The marriage gave Madeleine noble status, and she moved to her husband’s family seigneury at Sainte-Anne-de-la-Pérade. The couple had five children, two of whom survived to adulthood: Madeleine Marie (1707–76) and Charles François (1710–76).

Madeleine de Verchères later became involved in a series of legal cases related to her reputation, family land holdings and noble status. She travelled to France at least twice to resolve legal disputes. Historian and archivist Robert de Roquebrune concluded that “it was not a good idea to attack Madeleine de Verchères, whether one were a plaintiff or an Iroquois.” Madeleine was noted for her marksmanship throughout her life. In 1722, she saved her husband’s life when he was attacked by a small group of Abenaki men, wounding one of his assailants.

Madeleine de Verchères’s life and achievements received little attention in the century following her death. However, there was a revival of interest in her role in the defence of Fort Verchères during the late 19th and early 20th centuries. An increased interest in French Canadian history following the 1837 Rebellion in Lower Canada and the canonization of Joan of Arc in 1920 contributed to Madeleine’s prominence in popular culture. A 1918 play depicted Lord Durham imagining that French Canada did not have much history until he learned about Madeleine de Verchères. Governor general Earl Grey purchased a statuette of Madeleine by Louis-Philippe Hébert for Rideau Hall and proposed a similar statue by the same artist in Verchères. She was the subject of one of the first French Canadian feature films in 1922.

During the First and Second World Wars, the story and image of Madeleine de Verchères were used to encourage Canadian women’s participation in the war effort, especially in Quebec. A 1916 biography of Madeleine by Arthur G. Doughty, A Daughter of New France, was dedicated to “Her Royal Highness Princess Patricia whose name is proudly borne by one of the noblest regiments that ever fought in Britain’s cause [Princess Patricia’s Canadian Light Infantry].” Princess Patricia sketched the book’s frontispiece, which depicted the windmill at Verchères. Proceeds from the book supported the First World War “Red Cross work of the Magdelaine de Verchéres chapter of the Daughters of the Empire.” A Second World War recruitment poster, printed in both French and English, depicted an idealized image of Madeleine de Verchères clutching a rifle, with a caption describing her as one of Canada’s national heroines. 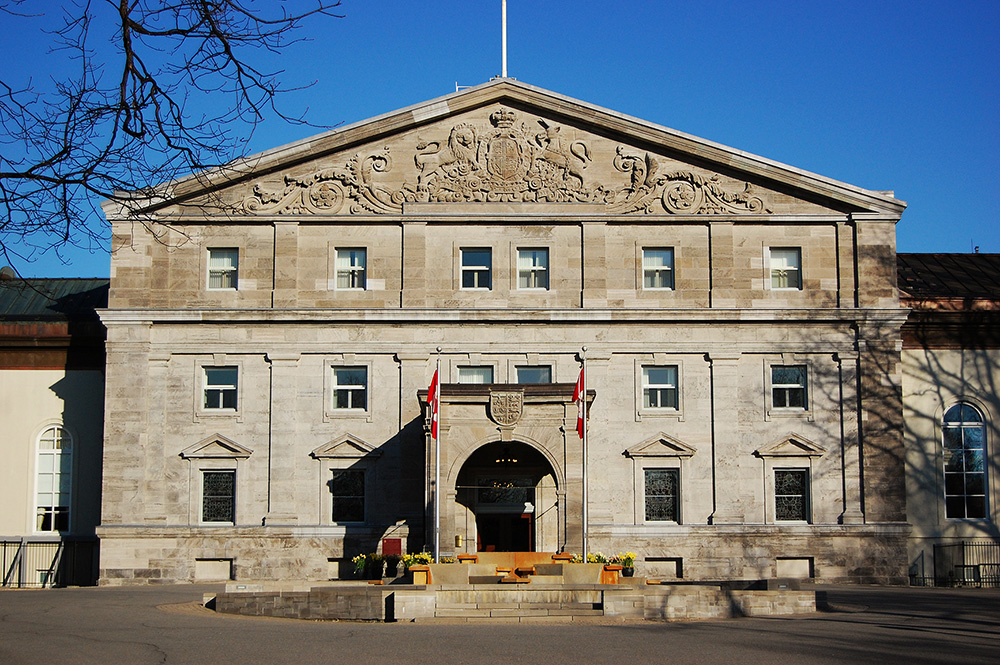