Margaret Alberta Corbett Ecker, journalist (born 1915 in Edmonton, AB; died 3 April 1965 in Ibiza, Spain). Margaret Ecker was an award-winning newspaper and magazine writer. She was the only woman to serve overseas as a war correspondent for the Canadian Press wire service during the Second World War. She was also the only woman present at Germany’s unconditional surrender in 1945. Ecker was made an officer of the Netherlands’ House of the Orange Order in 1947, making her the first Canadian woman to receive that honour.

Margaret Alberta Corbett Ecker, journalist (born 1915 in Edmonton, AB; died 3 April 1965 in Ibiza, Spain). Margaret Ecker was an award-winning newspaper and magazine writer. She was the only woman to serve overseas as a war correspondent for the Canadian Press wire service during the Second World War. She was also the only woman present at Germany’s unconditional surrender in 1945. Ecker was made an officer of the Netherlands’ House of the Orange Order in 1947, making her the first Canadian woman to receive that honour.

Margaret Ecker was the daughter of Margaret Elizabeth (née Corbett) and Peter Ecker. Her mother was involved in club and United Church volunteer work. Her father was a foundry moulder and a lifelong member of the International Molders and Allied Workers Union. (See Iron and Steel Industry.) Before she was born, her parents lost a seven-year-old son when he was struck and killed by a streetcar near his Edmonton school. The parents filed an unsuccessful lawsuit against the city. The family moved to Vancouver in 1917.

Ecker was a precocious writer. In 1930, at age 15, she wrote several news reports and fictional short stories for the children’s page of the Daily Province while she was still a pupil at King George High School.

Ecker studied English and History at the University of British Columbia, graduating with an arts degree in 1936. She was active on campus as a contributor to the Ubyssey student newspaper, where she served as a feature editor from 1935–36. She was editor of the Totem yearbook in her graduating year. Her other interests included membership in the literary Letters Club, the Players’ Club theatre group, and as an officer of the Beta Theta chapter of the Alpha Phi sorority. She later served as editor of the Graduate Chronicle alumni magazine.

After graduating, Ecker worked as a reporter for the Vancouver Province. She also briefly worked for the Calgary Herald.

While covering the Royal Tour of 1939 for the Province, she met Bob Francis, a Montreal-based correspondent for the British United Press news agency. Francis, who had been born at Sydenham, England, grew up in British Columbia, where his father was a fruit farmer. The couple married at St. John’s United Church in Vancouver on 3 December 1941, four days before the Japanese attack on Pearl Harbor.

Ecker was hired as a feature and women’s editor in Montreal by British United Press. One of her first reports was a two-part series on the Canadian Women’s Army Corps training centre in Quebec. After a few months, husband and wife were hired by the Canadian Press wire service to report from Ottawa. In July 1942, she enlisted as a press liaison officer with the Royal Canadian Air Force.

Ecker continued to use her birth name as her professional name during the war. She remained in Canada, covering the home front for the wire service. She was known for her stories about Princess Juliana of the Netherlands, who was living in exile in Ottawa. (See also Princess Margriet of the Netherlands.)

In September 1943, Ecker wrote a remarkable story about a man unable to speak or move who was found on the streets of Toronto. Stricken by a sudden and unexplained paralysis, he eventually regained enough movement in his hand to scratch out his name in pencil. The man became a writer, selling stories to pulp magazines. Ecker wrote that his true story was “stranger than the fictions he writes.” The article, which was published in newspapers across the country, won Ecker a Canadian Women’s Press Club Award. The judge, American author and actor Cornelia Otis Skinner, described the article as “terse, vivid and with a justifiable emotional dip, but not a complete bath.” Ecker won the award again for a 1946 article published by Chatelaine magazine.

The Canadian Press wire service assigned Ecker to its wartime London bureau in November 1943. She was the first woman to be sent overseas by the agency. She filed stories about nursing sisters, women in the merchant navy and cleaners who worked under armed guard in the secret headquarters for invasion planning. After the D-Day invasion of 6 June 1944, Ecker interviewed wounded soldiers at hospitals in England. By September, she was reporting from liberated Paris.

Late one evening in 1945, Ecker and a handful of other correspondents based in Paris were summoned to Supreme Headquarters Allied Expeditionary Force at a schoolhouse in Reims, France. When General Dwight D. Eisenhower, the supreme commander of Allied forces, spotted the young Ecker, who was 30, he said, “What’s that child doing here?”

Ecker was one of 17 correspondents invited to the signing of the armistice and surrender of German Armed Forces in the early hours of 7 May 1945. She was the only woman in the room for the ceremony that ended six bloody years of war, celebrated as VE-Day (Victory in Europe).

“We got the phone call and knew it was something big,” Ecker said later. “We drove out there, about 60 of us, and it was quite a jam in the schoolhouse, all of us pushing and shoving and leaning over each other’s shoulders to see what went on.” Later, Ecker said she did not consider the significance of her role as the only woman to witness the signing. “I just knew that the biggest event that I had ever seen or would ever write about in my life was taking place,” she said.

On 23 May 1945, she was again on hand when the remnants of the Nazi regime surrendered to British Field Marshall Bernard Montgomery at the Baltic seaport of Flensburg, Germany. Ecker also toured the liberated Netherlands with Queen Wilhelmina, whom she had befriended in Ottawa. They spent eight hours together in an amphibious vehicle greeting residents in flooded lands.

In the years after the war, Ecker and her husband freelanced articles as they travelled through Europe and the South Pacific. In 1951, she became western director, based in Vancouver, of Inside Canada, a public relations firm. She continued writing magazine articles for such publications as Liberty and Saturday Night. In 1956, she became women’s news editor of the Vancouver Herald. After the newspaper folded the following year, Ecker and her husband relocated to London, England, where Francis served as a correspondent for Newsweek.

In 1947, the Queen of the Netherlands named Ecker an officer of the House of the Orange Order. Ecker was the first Canadian woman to be so honoured.

Ecker died while on holiday with her family in Spain’s Balearic Islands. 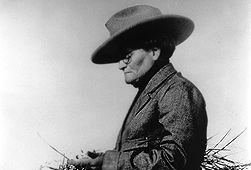