Manitoba Arts Council. Independent agency created by the Manitoba government in 1965 to encourage and 'promote in the province the study, enjoyment, production, and performance of works in the arts.' The council consists of 15 board members, appointed for a limited term by the Lieutenant-Governor-in-Council. Although the council reports annually to the Minister of Culture, Heritage and Tourism, it is free to establish its own policies and programs.

In 2002, a Multidisciplinary Advisory Panel was established consisting of 20 members elected by the arts community to provide a link between the council and the arts community. The Minister of Culture, Heritage and Tourism allocates the Province of Manitoba Bridges Grant (est 1999) and the Province of Manitoba Operating Grant to the Council on an annual basis. These funds allow the Council to provide assistance to Manitoba artists and arts organizations from a range of artistic disciplines including music, film and video, crafts, visual arts, dance, writing, theatre, and publishing.

The council offers several granting programs to individuals and groups involved in music. Among these are Operating Grants and Annual Grants for music organizations, Music Production Grants, Composers/Musicians Professional Development Grants, Performing Arts Travel Grants, Composers Commission and Development Grants, Touring Grants for Individuals and Small Ensembles, Touring Grants for Organizations, the Arts Opportunities Fund, and the Arts Incentives Fund. The Council also provides support to various music festivals and competitions in Manitoba, awards student bursaries to post-secondary music students, and sponsors the Artists in the Schools Program. In 2003 the council provided over $1.5 million in funding to individuals and organizations involved in music.

The council recently launched several new granting programs. Founded in 2003, the Manitoba Arts Council Arts Award of Distinction honours 'a professional artist who has reached the highest level of artistic excellence.' Laureates of this $30,000 award include Leslee Silverman and Robert Kroetsch. Major Arts Grants of $25,000 are awarded annually to three established Manitoba artists who plan to concentrate on a significant project for up to one year. Two new programs were established in 2004: the Artist-in-Community Residency Program (AIC), which supports community arts projects; and the Community Connections and Access Grant, which addresses the needs of artists who face barriers to equal opportunities in funding. The Council is advised on grant applications by peer evaluation and by its own committees.

Beginning in 1979, in conjunction with the Touring Office of the Canada Council, the Council has sponsored CONTACT, a biannual performing arts gathering at Winnipeg, presented with the cooperation of the Manitoba Arts Network and the Department of Culture, Heritage and Tourism, featuring workshops and a variety of auditions for the benefit of performers, agents, and prospective employers. Until 2003, the council published a newsletter titled Artslink. All information is now posted on their website. The council publishes an annual report. 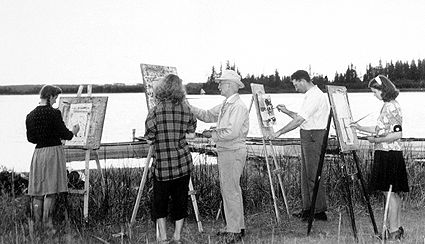 Modernist Art on the Prairies