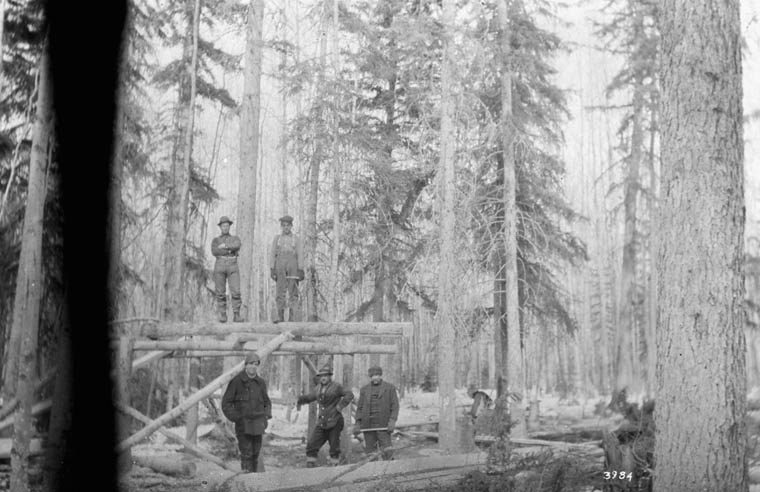 For the better part of several millennia, practically all persons who resided in Canada were tree cutters of various sorts. For centuries, Aboriginal people felled trees with stone axes and fire, and by girdling them. When the first Europeans began arriving in the early 1600s, they also set about clearing the ubiquitous forest in order to farm, erect structures and produce firewood for heat and cooking. The same was true of the British settlers — both from Britain and via the United States — who migrated here after the conquest of French North America and into the late 1700s.

It was only around the turn of the 18th century, however, that the professional logger — or lumberjack — was born. Over more than the next hundred years, the timber trade in Eastern Canada flourished. It grew to be the backbone of the region’s industrial economy, and focused on harvesting white pine. From roughly 1800 to 1840, production was centred on cutting and hewing square timber for the British market. Then this industry underwent a reorientation, whereby the pine logs were increasingly sawn into planks for sale largely in the United States. It was estimated that during the 19th century, which was the heyday of the white pine era, half the males in Canada were employed as lumberjacks. By the turn of the 20th century, the receding stands of mature white pine in the East was sending that part of the industry into decline while lumber production — based largely on harvesting Douglas fir — was accelerating in British Columbia. At the same time, a robust business in harvesting pulpwood (largely spruce in the east and Douglas fir in the west) for both domestic and American pulp and paper makers sprang up. The 20th century saw both the lumber and pulp and paper industries remain crucial parts of the Canadian economy, a trend that continued after the year 2000. As a result, timber has been cut commercially over a period that spans more than four centuries, thereby making the job of the lumberjack one of Canada’s oldest professions.

For the longest time, lumberjacks toiled from dawn to dusk, six days per week, and lived tightly packed in shanties (or bunkhouses) whose odour — a mix of smoke, sweat and drying garments — was as distasteful as the bedbugs they supported. Strict rules often governed many of the bush camps (or "shanties"); many were alcohol-free and for the longest time talking during meals was strictly forbidden.The food was usually top-notch, and enormous amounts of it were served. Lumberjacks burned roughly 7,000 calories per day, which explains their voracious appetites. In addition, cooks sometimes only allowed 10 to 15 minutes for loggers to eat, accounting for the gravity often governing mealtimes. 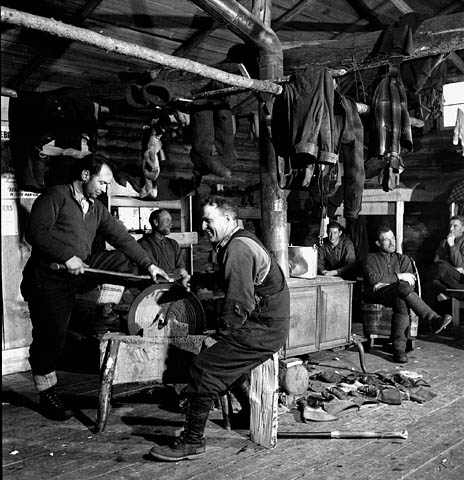 Lumberjacks in the bunk house at the l'Ange Vin camp in Gatineau Quebec, 1943. Image: Ronny Jaques / National Film Board of Canada / Library and Archives Canada /1971-271 NPC.

The same approach was taken to work in the field, for it was some of the most dangerous in Canada. Injury and death could occur at any time and in myriad forms, including being hit by a wayward tree or infamous widow-maker (i.e., a broken limb hanging freely in a tree), or being crushed by a log that unexpectedly fell from its pile. Considering the lumberjacks’ cloistered living arrangements and exacting working conditions, it is little wonder they stirred up havoc each spring upon their return to civilization. Stories of them unleashing their pent-up need to brawl, drink and carouse in places like Bytown (now Ottawa) are legendary.

The most remarkable part about the history of lumberjacks is the dramatic transformation that their work in the woods has undergone. Prior to roughly the end of the Second World War, trees were cut using human and horse power during the fall and winter (except on the coast of British Columbia, where the milder weather would permit year-round logging). The cold weather allowed for logs to be drawn by horses — or skidded — more easily from the stump to nearby frozen water courses, and hinterland farmers were in need of work to supplement their income during those seasons, therefore presenting a ready and willing work force. The lumberjacks would cut larger diameter trees (i.e., sawlogs) in teams of two and three, consisting first of only axemen and then later, after the development of crosscut saws, axemen and sawyers. They would harvest smaller diameter trees (i.e., pulpwood) alone using swede saws or in tandem. In the spring, as the ice broke up and snow melted, the hardiest and most skilled of the lumberjacks would remain on the job as the draveurs, or river drivers, whose job it was to oversee the movement of the logs from the bush to the mill. Doing so required them to “walk on water”: They would carefully manoeuvre themselves across the log booms with the assistance of calked (i.e., spiked) boots on their feet and peaveys (special tools for moving logs) in their hands.

Beginning during the Great Depression and accelerating rapidly after 1945, the profession underwent revolutionary changes, as machinery entered practically all phases of the work. Motorized chainsaws took the place of handsaws and axes, and huge machines were developed to cut, de-limb and chop up the trees. Instead of horses, skidders now dragged the logs to piles, arranging them at the side of the road for pickup by hauling trucks; the days of the river drive were ending. These improvements in harvesting technology translated into far fewer workers taking down far greater volumes of wood in much less time than their forebears ever could have imagined. They could also do it year-round, and around the clock if it were desired. In addition, lumberjacks no longer lived during the cutting season in bush camps, since most now commuted to work each day. Undoubtedly, their lives were much easier than in earlier years, and they required different skills to perform their jobs. Women now, for the first time, also entered the profession, although it remained predominantly male. One thing that did not change was the relative danger of their work. Although a slew of laws and regulations were implemented over the 20th century to make the lumberjacks’ work safer, and most tree cutters and log movers now perform their duties ensconced within a protective cab, the rate of injury and death of bush workers compared to other occupations is still alarmingly high. This is particularly true in British Columbia, where the mountainous terrain makes the job particularly challenging.

While the lumberjack holds enormous symbolic significance in Canada, the public’s perception of the profession has undergone a radical transformation. Initially, the extraordinarily difficult nature of the lumberjacks' work was responsible for enshrining their existence in the pantheon of Canadian folkloric heroes. During the early to mid-1800s, for example, tales were told — and captured in print — of Joe Montferrand (in English he was known as Joe Mufferaw), the legendary bûcheron capable of unfathomable feats of strength. It is believed he was the inspiration for the American mythic figure, Paul Bunyan, whose legend arose during the mid-1800s. Similarly, academics such as Arthur R.M. Lower, who chronicled the early history of Canada’s timber trade, glorified lumberjacks for their toughness and grit, and for their role in helping build the country’s foundation. However, about 50 years ago, a distinction emerged between the old-time and modern lumberjack. Whereas the former still retains a venerable status, today the latter is more often than not vilified instead of idolized. The rise of the environmental movement in the late 1960s touched off emotionally charged debates about logging, and the lumberjack fell decidedly out of favour. Although Canadians and foreigners alike continue to derive a myriad of benefits from the lumberjacks’ labour, many have come to loathe what they represent. This perspective persists despite remarkable improvements in Canadian forest stewardship.