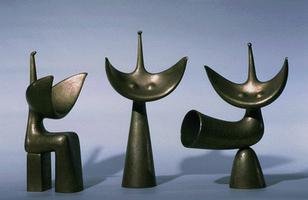 Louis Archambault, OC, sculptor (born 4 April 1915 in Montréal, QC; died 27 January 2003 in Montréal, QC). Archambault studied at the École des beaux-arts in Montréal, receiving the prestigious Prix du Ministre in 1939. He was awarded the first prize for sculpture in the Concours artistiques du Québec in 1948. That same year he joined with others, including Alfred Pellan to sign the manifesto Prisme d'Yeux. From 1955 to 1968 he received numerous awards, including the Royal Architectural Institute of Canada's medal of honour (1958), the Centennial Medal (1967) and the Order of Canada (1968).

Archambault created major pieces for the Canadian pavilions at the Brussels (1958) and Montréal (1967) international expositions, and has done commissioned works for Place des Arts, Montréal, the Ottawa and Toronto airports and the Ottawa city hall. His work is found in many Canadian and foreign museums, and has been seen in many one-man and group shows. His contribution to the growth and renewal of sculpture in Canada made him one of the greatest Canadian sculptors of his generation.