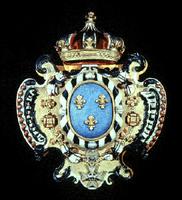 The British removal of this French coat of arms from the the porte Saint Louis at Québec was symbolic of the change in authority after the Conquest. This shield, hand carved in pine in the baroque style of the period, is attributed to Noel Levasseur, the foremost sculptor of New France (courtesy Library and Archives Canada). 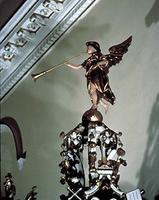 L'Ange à la trompette, by Noel Levasseur, in the historical chapel of the Ursulines of Québec, beginning of the 18th century (courtesy Ursuline Chapel, Québec).

Levasseur Family, master joiners and architectural sculptors active in Québec throughout the 18th century. The dynasty was founded by 2 brothers who had apprenticed in France as master joiners: Jean (b at Paris Feb 1622; buried at Québec 31 Aug 1686) and Pierre (b 1629; d c 1681). From the middle of the 17th century, dozens of Levasseur descendants worked on government and especially religious buildings in Québec.

Outstanding among them were Noël (b at Québec City 28 Nov 1680; d there 12 Aug 1740), a sculptor who introduced the balustraded tabernacle at the chapel of the Hôpital-Général in Québec (1722-23) and elsewhere, and his cousin Pierre-Noël (b at Québec City 28 Nov 1690; d there 12 Aug 1770), one of the best architectural sculptors in New France. Pierre-Noël's work is characterized by the early use of the baldachin in church decoration and imbued with the richness and dramatic movement of the Baroque period, exemplified by the statues of St Peter and St Paul (1742-43) in the church of St Charles Borromée at Charlesbourg. Both sculptors participated in the ornamentation of the Ursuline chapel at Québec (1726-36) with its boldly trumpeting angel of the Last Judgement above the pulpit and its classically inspired retable, alive with shimmering saints and robust angels. This magnificent interior in the spirit of Louis XIV is one of the finest examples of wood carving in New France.

Reflecting the shift in taste towards the fussier, more animated Louis XV forms is the work of the next generation, in particular 2 sons of Noël, namely François-Noël (bap at Québec C 26 Dec 1703; d there 29 Oct 1794) and Jean-Baptiste-Antoine (bap at Québec C 20 June 1717; d there 8 Jan 1775). Spanning more than a century, the work of the Levasseur family in Québec amply illustrates the cultural transfer of French classical forms to the New World.