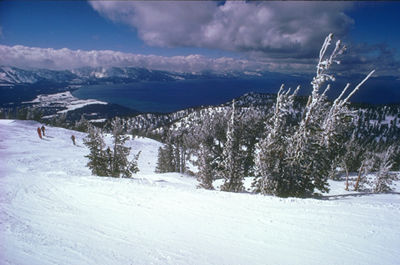 Mont Tremblant in the Laurentians. 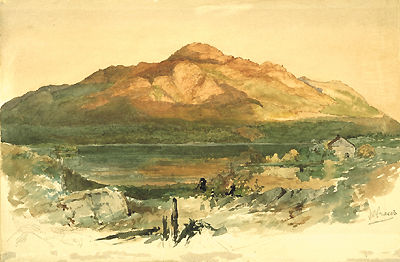 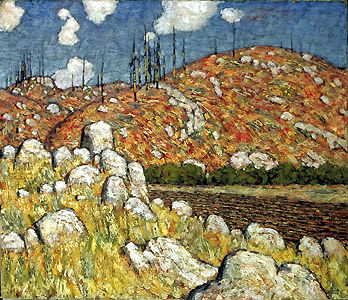 The Laurentian Highlands are part of the plateau and dissected southern rim of the Canadian SHIELD in Québec. Viewed from the valleys of the Ottawa and St Lawrence rivers, the south-facing escarpments of the Shield give the appearance of mountains 500-800 m high; looking across the plateau, the relief is more moderate and subdued. These scarps mark the dramatic southern edge of the highlands.

Although the other limits are less well defined, the highlands may be considered to extend 100-200 km northward from the scarps and to stretch from the Gatineau River in the west (mean elevation 400 m) some 550 km to the SAGUENAY RIVER in the northeast. Here they attain their maximum elevation north of QUÉBEC CITY in the Réserve faunique des Laurentides (over 1000 m). Individual summits rise above the plateau surface: Mont Sir Wilfrid (783 m) and Mont TREMBLANT (968 m) in the west, Mont Sainte-Anne (815 m) at Québec, Mont Raoul-Blanchard (1166 m), Mont Bleu (1052 m) and Mont des Conscrits (1006 m) in Réserve faunique des Laurentides. Cap-Tourmente (579 m) and Mont des Éboulements (770 m) are dramatic examples of the scarp face as it drops precipitously to the St Lawrence River.

The 1-1.7 billion-year-old rocks of the Shield are mostly metamorphosed granites and gneiss in this area. They have been faulted, uplifted and eroded. The ice of the Pleistocene glaciation (which began 1 million years ago) scraped the plateau surface bare in many sections, but elsewhere deposited rock, sand and gravel act as moraines, resulting in a disrupted drainage system with many lakes and youthful rivers. The ice also overdeepened the valleys that lead southward from the Shield, the most dramatic of which is the fjord of the Saguenay River (500 m cliffs and 600 m depths).

When the ice sheets finally melted (between 10 000-18 000 years ago) many of these valleys were partly filled by sands, gravels and other outwash material carried by the meltwaters. Postglacial uplift and continued downcutting by past and present rivers have resulted in the formation of terraces and plains along the river valleys. The resulting local relief of 300-600 m along these valleys adds to the ruggedness and scenic beauty of the highlands.

The southern limits of the vast BOREAL FOREST of subarctic Canada cover most of the highlands. Black and white spruce, balsam fir, larch, poplar and white birch are the dominant tree species. Along the southern edge of the plateau and in the valleys, these mix with white pine and deciduous species common to the ST LAWRENCE LOWLANDS - sugar maple, beech and hemlock.

The forests attracted the early explorers and settlers from the lowlands for hunting, trapping and eventually for forestry. Lumbering became a major industry and many species of trees were cut and floated down the numerous rivers to sawmills. These were located near rapids or falls where the rivers left the Shield or joined the Ottawa or St Lawrence rivers. HULL and LACHUTE at the mouths of the Gatineau and Nord rivers and GRAND-MÈRE and Trois-Rivières on the St-Maurice are typical.

As technology advanced and rivers were harnessed for electricity (SHAWINIGAN, 1899), the lumber mills were joined by other industries such as textiles at Lachute and St-Jérôme and pulp and paper mills and chemicals at Shawinigan and Grand-Mère. Deposits of silica, lime, dolomite and magnesite at several locations have proven to be important resources.

The valleys leading from the Shield tempted some hardy early settlers who, pressed by the scarcity of unoccupied farmland on the lowlands, tried to develop an agricultural base. An early wave in the mid-1800s of Irish and other European immigrants was partly successful in the lower valleys. A second wave of French settlers, inspired by Father LABELLE in the late 1800s, initiated several colonization schemes. St-Jérôme, founded in 1834, became the springboard for the push up the Nord and Rouge valleys. The railway reached STE-AGATHE-DES-MONTS in 1892 and a first period of success occurred.

The podzolic soils and the humid, cool continental climate proved unsuitable for agriculture, however, and within 2 generations most of this marginal land was abandoned. The farmers found work in the forest industries, which stretched even farther north in search of marketable trees, and in the industries and mills along the rivers.

The physical environment that was hostile to agriculture was ideal for recreation, a fact recognized by some of the colonists. As early as 1894 Ste-Agathe and the surrounding hills, lakes and streams attracted summer and, by the 1920s, winter tourists. Vacationers from the cities, not only nearby OTTAWA, Montréal and Québec, but also from the US, began a seasonal migration. Tourists of all ages and incomes flocked to the resort areas and family cottages throughout the highlands.

Extensive modern road networks, particularly the Laurentian Autoroute north from Montréal (built in the late 1960s), provide rapid access to such centres as St-Sauveur, Ste-Agathe-des-Monts and Mont-Tremblant and, near Québec City, MONT SAINTE-ANNE. The extension of the Trans québécoise Autoroute north from Trois-Rivières to beyond Grand-Mère has further opened the upper St-Maurice valley and its parks and wildlife preserves to outdoor recreation enthusiasts.