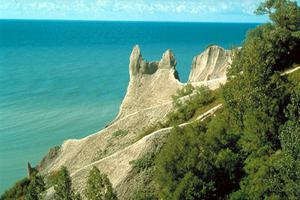 The intersection of older and higher glacial and lake deposits just east of Toronto has produced the Scarborough Bluffs - spectacular, cathedral-like cliffs rising as high as 100 m above the lake (Corel Professional Photos).

A landslide is a downward and outward movement of a soil mass that formed part of a slope. Although the term landslide often has a broad meaning, this entry is restricted to landslides in soils and excludes creep movements, falls and rockslides. A landslide may occur with or without any apparent disturbance and involves a soil mass ranging from a few to several million cubic metres. Slope failure may occur within a few minutes or take several months or even years. Landslides occur in every province in Canada and in both natural and artificial slopes. They have been responsible for loss of life, destruction of property, reduction in property values, loss of productivity of agricultural and forested land, disruption of transportation systems and pollution of surface waters.

The common landslide types (circular-arc failure and noncircular-arc or translational failure) can be analysed and the risk of failure calculated. The major causes of slope failure are the removal of material at or near the base of a slope by natural erosion or human excavation; additional weight placed on the upper part of a slope by natural or human agencies; an increase of water pressure within the slope by rainfall or snowmelt, local irrigation or leaking sewer or water mains. Land-use studies in the design stages of a project can avoid or minimize subsequent landslide activity.

The 1929 Grand Banks earthquake triggered submarine landsliding of about 100 km3 of sediment, the largest historic event in Canada. The resulting tsunami caused loss of life along the south coast of Newfoundland. Submarine transatlantic cables were ruptured by the sediment flow.

Clayey soils were deposited in the Champlain Sea, which invaded the St Lawrence and Ottawa River lowlands between some 10 000 and 12 000 years ago. These sediments are termed sensitive and transform from a brittle soil to a viscous fluid when sufficiently disturbed. This transformation occurs quickly and with little warning. The remolded mass can flow for long distances.

Thousands of landslides have been identified on air photographs. In 50 large, documented landslides in sensitive clays in eastern Ontario and Québec over 100 people have been killed and 40 000 ha of land destroyed. The South Nation River landslide (16-17 May 1971) occurred at a site 48 km east of Ottawa and involved nearly 28 ha of debris, which was carried upstream and downstream, filling nearly 2.5 km of the riverbed to a depth of 11 m. The Lemieux landslide (20 June 1993), 4.5 km downstream, blocked the river again with nearly 3 million m3 of sediment. Near Chicoutimi, at St-Jean-Vianney, Qué, another major landslide in the sensitive clay destroyed 27 ha and 36 homes, and killed 31 people in 5 minutes (4 May 1971).

Landslides contribute to the retreat of the stiff clay bluffs along the north shore of Lake Erie and the Scarborough Bluffs in Toronto on Lake Ontario. The collapse of a cliff face on Lake Erie (14 August 1994) buried 4 children on a beach along Lake Erie near Port Burwell, Ont.

Over large areas of the western Canadian Prairie, a thin veneer of late Pleistocene deposits rests on the soft rocks of Upper Cretaceous age. During deglaciation, some 10 000 years ago, rivers were diverted from their preglacial courses and rapidly eroded deep, steep-walled, postglacial valleys (see Glaciation). Geologic evidence indicates that the rivers have been eroding laterally for about the last 6000 years (see River Landform). This lateral erosion, which removes support at the base of the slopes, results in the reactivation of ancient landslides and creates many new landslides. Because the soil strata are flat lying, the failed mass undergoes a dominantly translational movement.

At a site on the South Saskatchewan River, south of Saskatoon, erosion at the toe of the slope is causing slope failure. Slope failures in Saskatoon appear to be caused mainly by erosion from groundwater seepage, augmented by lawn watering. In the Edmonton area, many landslides have been induced by human activity. Many similar cases have been documented in Saskatchewan and Alberta.

A landslide, largely the result of toe erosion, is endangering the bridge across the Little Smoky River north of Valleyview, Alta. The bridge was completed in 1957; movement was noticed the following year. A 40 million m3 landslide, 75 km north of Grande Prairie, dammed the Saddle River in June 1990, creating a 3 km long lake upstream. The distribution of landslides along major rivers in southern Alberta shows that clayey bedrock deposited in ancient marine seas is most prone to failure. In Winnipeg, slope instability along the Red and Assiniboine rivers has long been a problem.

In the Vancouver area, the most common and destructive landslides are debris avalanches and debris flows. These failures are triggered by heavy rains that saturate the surface layer of soil. As this saturated mass moves down the steep slopes, it gains volume and velocity. The major result is damaged and destroyed property near the base of the slope. Dikes were installed at Port Alice on Vancouver Island to protect the town from debris flows such as those which occurred in 1973 and 1975. Debris barriers have been constructed on creeks on the east side of Howe Sound after flows damaged the railway and highway and caused fatalities.

In the permafrost areas of the western Canadian Arctic, many landslides are caused by melting ground ice that is exposed by sea or river erosion or by the destruction of vegetation on slopes by forest fires. The ice melts during summer and the overlying soil collapses and is carried away by the meltwater.