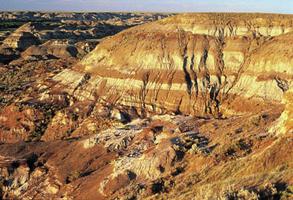 Land, in law, is an area of Earth's solid surface that is the property of an individual, group or state. Hence, the Canadian polity controls a total of 9 215 430 km2 of land, and 755 180 km2 of fresh water, for a total territory of 9 970 610 km2, the second largest national territory in the world after Russia.

It is important to recognize a distinction between land cover and land use. Land cover includes biota (a region's flora and fauna), soils, topography, surface and groundwater, and built structures; land use is the purpose for which humans exploit land cover. Land use involves both the manner and purpose of manipulation.

Land has a finite capability to resist the natural processes of EROSION. If we compare, for example, 2 relatively pristine environments, such as the COAST MOUNTAINS of British Columbia and the BADLANDS of Alberta, the Coast Mountains are 3-4 orders of magnitude more resistant to erosion than the badlands. There exists a broad spectrum of land resistance to erosion between these 2 extremes. It is therefore important, when land managers consider disturbing the land cover by introducing new land use, that they consider the optimal use of that land and do not exceed the threshold of resistance. Examples of failure to observe the optimal use of land exist throughout Canada's expanding urban areas, with catastrophic results for individual homeowners.

There are many ways of defining sustainability, but few have improved on the original definition provided by Gro Harlem Brundtland (1987), "ensuring that the needs of the present generation and the human activity arising from those needs do not compromise the ability of future generations to meet their own needs." The availability of land of adequate quality and quantity is an obvious critical consideration in the ongoing sustainability debate. Determining and implementing the optimal use of land in the present will do much to ensure that future generations' needs can be met. Included among these sustainable land use options are both enhancing the land cover and, in some cases, simply leaving the land cover undisturbed. (See alsoSUSTAINABLE DEVELOPMENT.)

In the 1960s and 1970s, Canada was a leader in establishing public awareness of land use issues. The CANADA LAND INVENTORY program (1965-75), which assessed and mapped the natural capability of approximately 25% of Canada's land area, contributed to a new sensitivity to land quality problems. The underlying concepts in this program were that land has a finite capability to sustain a given type of land use, that it has a finite capability to assimilate pollutants and that it is possible to define optimal uses for a given land unit. The Environmental Assessment and Review Process (EARP), 1973, introduced the twin principles of delaying or halting development proposals that were not respectful of the finite capability of the land, and requiring a regular audit of ways in which the land was disturbed by the development initiative (seeENVIRONMENTAL IMPACT ASSESSMENT).

Since the 1970s the terms of reference of the process have moved toward a more SOCIAL IMPACT ASSESSMENT and in the first decade of the 21st century, the integrity of the process is threatened by a perceived need to speed up the decision-making. The issue has become politically polarized between land developers and those who recognize the strong relation between the health of ECOSYSTEMS and human well-being. The land, its use and its future potential are the main ingredients in the debate. 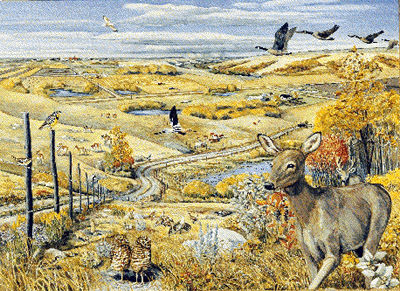