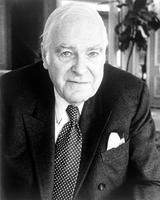 Keith Davey, politician (b at Toronto 21 Apr 1926). After graduating from University of Toronto's Victoria College, Davey worked in radio and held a number of positions in the Toronto-area Liberal Party. After Liberal defeats in the 1957 and 1958 general elections, Davey organized a small group, known as "Cell 13," to rejuvenate the party in Ontario. In 1961 Davey became the Liberal's national campaign director and helped to devise the strategy that defeated the Conservatives in 1963. His advice was less successful in 1965, when the Liberals sought a parliamentary majority.

Made a senator by Prime Minister PEARSON in 1966, Davey chaired a Senate investigation of Canadian mass media. Following the Liberal Party's near defeat in 1972, Davey was summoned by PMTRUDEAU to guide the party's electoral fortunes and was rewarded by a successful election in 1974. Although the Liberals were defeated in 1979, Davey returned the Liberals to power in 1980 as their national campaign cochairman and was brought back in midcampaign to try to revitalize John TURNER's flagging campaign in 1984. The experience was not a happy one, and in 1986 Davey took his doubts about Turner's leadership to the public in a book, The Rainmaker.