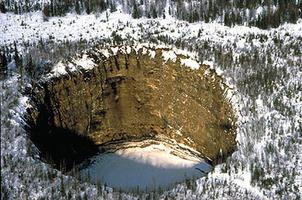 A karst landform is a geological feature created on the earth's surface by the drainage of water into the ground. Typical karst forms include sinkholes, caves, natural bridges and sinking streams. They were first studied in detail in Kras, Slovenia, hence the name karst. There are 1.2 million km2 of karst rock outcroppings in Canada, found in all geological regions except the Canadian Shield.

Karst landforms are created by water sinking and circulating underground, and the resulting chemical erosion of bedrock. For this reason, the development of karst landforms is limited to areas where comparatively soluble rocks — principally limestone — exist. Approximately 8 per cent of the earth's land surface is karst terrain.

Limestone is a type of carbonate rock — that is, a rock made up primarily of a carbonate mineral which, in the case of limestone, is usually calcite or aragonite. These are both forms of calcium carbonate (CaCO3). Over time, limestone may be dissolved by carbonic acid (i.e., carbon dioxide dissolved in water). Carbonic acid is formed when rain picks up CO2 as it falls through the atmosphere. Once it hits the ground, it may pick up more CO2 in the soil, turning into a weak carbonic acid solution. When this solution seeps into limestone bedrock via cracks and fissures, larger openings are created. Over the course of thousands of years, this erosive process creates underground drainage systems and caves.

The most widespread surface karst landforms are small solution pits, grooves and runnels, collectively called karren. Individual features are rarely longer or deeper than 10 m, but frequently they are densely clustered and dissect larger areas, referred to as limestone pavement. Limestone pavement is particularly well developed in Île d'Anticosti, Québec, the Bruce Peninsula and Manitoulin Island, Ontario. Small patches may be seen within the city limits of Hamilton, Montréal and Ottawa. In metropolitan Winnipeg, approximately 3,500 km2 of limestone pavement is preserved beneath glacial-lake clays (see Lake Agassiz) and serves as an important industrial water store. There are spectacular subarctic pavements in the Carcajou Range west of Norman Wells, Northwest Territories. Further north, ice penetration into cracks in the bedrock is common; the bedrock becomes shattered into rubble fields that are widespread on the extensive carbonate rock terrains of arctic Canada.

The most recognizable karst landform is the sinkhole. This is a bowl, funnel or cylinder-shaped depression in the earth which feeds water underground. There may be a periodic or permanent pond in the base. The length or diameter of sinkholes ranges from 10 to 1,000 m. Most are formed by chemical solution in the funnel or by collapse of the roof of an underlying cave. In southern Saskatchewan, collapse-solution cavities in salt have extended through as much as 1,000 m of overlying insoluble rocks to produce shallow sinkholes at the surface.

Sinkholes often occur in lines or clusters. In some karsts their frequency exceeds 500 per km2, giving the terrain a shell-pitted appearance. Thousands of sinkholes exist in southern Canada, from gypsum terrains in western Newfoundland to limestones on Vancouver Island. There are many large, spectacular examples in Wood Buffalo National Park, in the Franklin Mountains, and west of Great Bear Lake where limestones and dolomites have collapsed into cavities in gypsum. Some new collapses occur each year, the hole appearing in a matter of seconds. These are a hazard to settlement on gypsum terrains in parts of Newfoundland and Nova Scotia.

Larger karst landforms include dry valleys and gorges, carved by past rivers that now flow underground, and poljes, which are major sinkholes with flat floors and steep walls. Medicine Lake in Jasper National Park is a polje measuring 6 km by 1–2 km. The Maligne River drains into it and floods it to a depth of 25 m during the summer melt season. In winter, the lake reduces to small pond sinkholes in the polje floor. The sinking water is discharged 16 km northwest at some 60 springs in the floor of Maligne Canyon. With an aggregate discharge that may exceed 65 m3 of water each second, these are the largest karst springs known in Canada. Many other springs are known with peak discharges exceeding 10 m3 per second.

Karst landform development is rather limited in Canada when compared to countries that have not undergone repeated glaciation. Glacier action has eroded or infilled much karst. Canada’s finest karstland, Nahanni Karst, is found in a region of the Mackenzie Mountains, Northwest Territories, which has escaped glaciation for the past several hundred thousand years. Major karst forms have developed without interruption or destruction and include hundreds of sinkholes up to 150 m deep, giant solution grooves intersecting to form a natural labyrinth, several poljes and dry canyons. Parts of the karst have reached a very advanced stage, displaying residual rock towers and natural bridges, features rarely seen in northern latitudes.

A dense karstland of karren, small sinkholes and innumerable caves has developed on steep limestone tracts clad in Douglas fir in northern Vancouver Island. The landforms pose some hazard to forestry practices, while clear-cutting may severely damage both surface and underground karst.

Alpine karst, comprising fields of karren and shaft sinkholes above the treeline that drain into deep caves, is well developed in parts of the Rocky Mountains and Vancouver Island. Crowsnest Pass offers very good examples of classical alpine karst forms: major springs issue from active water caves in the floor of the pass while fragments of drained, relict caves are scattered at higher elevations up to the mountain summits. Some of the modern spring water is believed to have travelled as much as 70 km underground. The largest icefield in the Rockies, Columbia Icefield, is mostly drained by sinkholes surviving in the limestone and dolostone beneath it. The waters flow in great caves through Mount Castleguard to emerge as spectacular springs in the valley of Castleguard River (a headwater of the North Saskatchewan River). It is the world's pre-eminent example of modern subglacial karst.