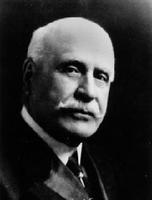 Vézina was a prominent leader of the musical life of Québec City between 1870 and 1925.

Joseph Vézina, conductor, organist, choirmaster, teacher, composer, music dealer, publisher (b at Québec City 11 Jun 1849; d there 5 Oct 1924). Except for lessons with his father and 6 months of studies with Calixa LAVALLÉE, he was self-taught in music. Owing to his remarkable memory and his capacity for hard work, he succeeded in playing and teaching most of the wind instruments and established himself as the leading conductor of musical ensembles in Québec City and the surrounding area. He was in fact a prominent leader of the musical life of Québec City between 1870 and 1925.

Vézina enrolled at the Quebec Military College in 1866 and was conductor of the band of the 9th Battalion of the Quebec Rifles from 1869-79. From 1879 to 1886 he directed bands for the Royal Canadian Artillery. In 1876 he founded the Beauport Concert Band. He also led several school bands. To his bands he added choirs, solo singers and extra instrumentalists as needed. On 24 June 1880 he led 100 band musicians from Québec City, Beauport and Fall River, Mass, at the historic performance of "O CANADA," added as a finale to his Mosaïque sur des airs populaires canadiens. When the Duke of York visited Québec City in 1901, Vézina conducted 250 musicians and 1000 choristers. He was the first conductor of the Société symphonique de Québec (ORCHESTRE SYMPHONIQUE DE QUÉBEC) 1902-24.

For his ensembles Vézina composed numerous marches and light concert pieces. He also wrote for orchestra, voice and piano, as well as 3 operettas. He published several of his works through his own publishing firm and ran a music store from 1872-79. He served as organist at St-Patrice Church 1895-1912 and as choirmaster at the Québec Basilica 1912-24. In 1922 he took part in the establishment of the school of music at Laval University, where he taught harmony until his death. He also taught at the seminary, at the Académie commerciale and at the Collège Jésus-Marie.