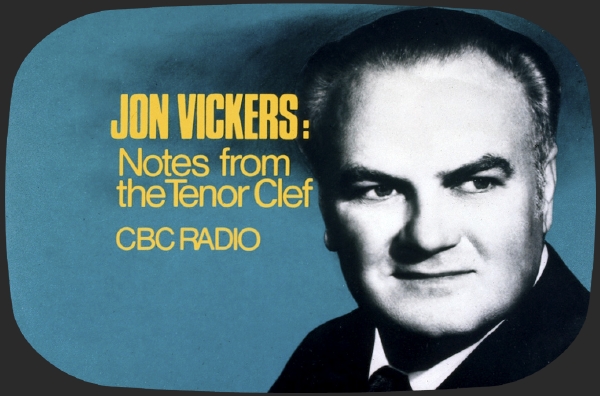 Jon (Jonathan Stewart) Vickers, CC, tenor (born 29 October 1926 in Prince Albert, SK; died 10 July 2015 in ON). Honorary LL D (Saskatchewan) 1963, honorary D MUS (Guelph) 1977, honorary LL D (Laval) 1978, honorary LLD (Queen's) 1984, honorary D LITT (McMaster) 1985, honorary D MUS (Toronto) 1986, honorary D MUS (Windsor) 1989. The sixth child in a family of eight, he recalls singing in a Christmas concert at the age of three. His boy's treble had become a robust tenor by the time he had finished high school, and he joined Baptist choirs in Prince Albert and Flin Flon (where he worked in chain stores) and sang leading roles in Gilbert & Sullivan and Victor Herbert operettas. Compulsive about his gift, he sang, in those days, 'for anyone anytime anywhere.' 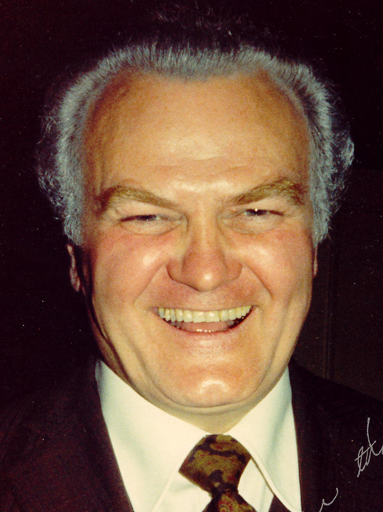 In 1946 he became assistant manager of a chain store in Winnipeg, but soon the demand for his service as a singer began to encroach on his time, and his employer ordered him to give up singing. Instead he resigned and became a hardware salesman, but continued to sing. Encouraged by Mary Morrison to study voice formally, he sent a recording of his singing to Ettore Mazzoleni at the RCMT. Accepted as a scholarship student in the fall of 1950, he began training with George Lambert. During his first year in Toronto Vickers sang in 30 oratorio performances for the Board of Education, was soloist in Messiah at the University of Western Ontario, was chosen by Mazzoleni as soloist for the Canadian premiere of Bruckner's Te Deum with the massed RCMT choirs, and in the fall of 1951 sang in Messiah at Massey Hall with the Toronto Mendelssohn Choir. In 1952 he won honourable mention in the CBC radio competition 'Singing Stars of Tomorrow' and first prize in Radio Canada's 'Nos Futures Étoiles'. By 1955, despite wide exposure in concert and oratorio and some 28 operatic performances, including COC appearances as the Duke in Rigoletto (1954), Alfredo in La Traviata (1955), and Alfred in Die Fledermaus (1954), he had received no offers from either the USA or Europe. However, after his performances as the Male Chorus in the Stratford Festival's production of Britten's The Rape of Lucretia and as Don José in a 1956 COC production of Carmen with Regina Resnik, he was invited in 1957, on Resnik's recommendation, to sing in concert performances of Fidelio and Medea, the latter with Eileen Farrell, in New York. Also in 1956 Sir David Webster, general administrator of the Royal Opera House, Covent Garden, visited Canada, heard Vickers, and invited him to London for an audition. A three-year contract with the Royal Opera was the result. After his debut on tour with the Covent Garden company as Riccardo in The Masked Ball (January 1957) Vickers received enthusiastic notices, and he subsequently enjoyed great personal success in Carmen, Don Carlo, Aida, and The Trojans. After his debut at Bayreuth in 1958 as Siegmund in Die Walküre, Vickers was acclaimed as the world's leading interpreter of the role. That same year he sang Jason to Maria Callas' Medea in Dallas. By the end of the 1959-60 season, having appeared with the Vienna Staatsoper and the Teatro Colón in Buenos Aires and having sung in Peter Grimes and Fidelio at the Metropolitan Opera, he decided to become a freelance artist.

Vickers' roles over the years represented most of the dramatic and Heldentenor repertoire: Don José, Radames, Don Carlo, Canio, Otello, Tristan, Aeneas (The Trojans), Siegmund, Parsifal, Florestan, and, his favourite, Peter Grimes. In the latter role he was noted for the projection of a dramatic dimension rare on the operatic stage. He regarded the operas of his repertoire as conveyances for their composers' deepest emotions, intuitions, and beliefs, not as vehicles for voices. Consequently he concerned himself with Nietzschean philosophy in his interpretation of Tristan and conceives Otello as 'the Julius Caesar of the Venetian Empire.' One of Vickers' most significant associations was with the conductor Herbert von Karajan. He sang in Karajan's first three Salzburg Easter Festivals (1966, 1967, 1968), recorded Tristan und Isolde, Die Walküre, Otello, and Fidelio and filmed Pagliacci and Otello with the conductor, and sang under his baton in the great opera houses, including La Scala and the Metropolitan. In 1985 Vickers starred in Handel's Samson at Covent Garden in a joint production with the Lyric Opera of Chicago, and the Met, to celebrate Handel's 300th birthday.

Though he has given occasional recitals in Canada, notably in Toronto and at the opening of the 1969 Guelph Spring Festival, Vickers in his maturity sang little opera in Canada. While this has been blamed on Toronto critics' reactions to his recitals, in the 1960s and 1970s it probably was due to his fees, which by then were justifiably large, and to his time, which was too limited to accommodate the weeks of rehearsal often demanded. Nevertheless, there have been stellar occasions: he sang Otello in four performances in July 1967 at the World Festival (Expo 67) in Montreal. With the soprano Régine Crespin and the MSO he sang Act I of Die Walküre at the opening ceremonies of the NAC, 10 Jun 1969. He was the Male Chorus in the Guelph Spring Festival production (4, 6, and 8 May 1974) of Britten's The Rape of Lucretia. With the soprano Birgit Nilsson and the TS under Zubin Mehta he sang opera excerpts in what was billed as a 'Dream Concert' in Toronto in November 1974. And with the Opéra du Québec in May 1975 he was Tristan in five Montreal performances of Tristan und Isolde and acted as host for the production when it was seen on CBC TV (9 Feb 1977). An eight-city tour of Saskatchewan in 1977 with his accompanist Peter Schaaf culminated in a recital in his home city, Prince Albert, in the church where his father had preached as an elder and where he had sung in the choir as a child. The program included excerpts from Samson (Handel), Die Walküre, Hugh the Drover (Vaughan Williams), and Peter Grimes. He gave his first public performance of Schubert's dramatic song cycle Winterreise at the Guelph Spring Festival 9 May 1979. He returned to Canada that August to sing at the funeral of former Prime Minister John Diefenbaker at Christ Church Cathedral, Ottawa. He sang Winterreise to a near-capacity audience at Roy Thomson Hall in 1983 and gave recitals in Prince Albert and Vancouver in 1984. For the Toronto International Festival in 1984 he sang in Die Walküre and Peter Grimes with the Metropolitan Opera on tour. In 1985 and in 1988 he made concert appearances with the Kitchener-Waterloo Symphony Orchestra including entire acts from Die Walküre and Parsifal. In 1987 he returned to sing at the RCMT centennial concert at Roy Thomson Hall, and later at the Guelph Spring Festival. In order to spend more time with his family Vickers limited his performances to 65 a year after 1966. For years at the height of his career he maintained a farm in Ontario, working it himself between engagements to maintain a contact with realities different from those of the operatic world. In 1973, however, he moved to Bermuda.

Vickers included a number of Canadian works in his recital repertoire. He was a champion of the songs of Bernard Naylor, stating 'I love Naylor's songs... I don't think the world is really ready for Naylor's songs but his day will come' (Music Magazine, Nov/Dec 1986) and he was well reviewed (Toronto Globe and Mail, 25 Apr 1987) for his performance of Jean Coulthard'sSix Medieval Love Songs. He recorded these and other Canadian songs for Centrediscs in 1986. Vickers announced his retirement in 1988.

A Newsweek article (15 Mar 1976) on the world's leading tenors described Vickers as 'an austere, reflective Canadian... goaded by the demands of a protestant work ethic' and continued: '[He] uses his rugged voice with a contemptuous disregard for musical or national boundaries and a compulsion to challenge the brutes of the repertory... The sound of his muscular, tireless voice is pitted and scarred as if hacked out of a Canadian quarry. But it is clearly made by hand, its imperfections redeemingly human and individual. What he conveys with unrelenting concentration is a profound dramatic sensibility.' Will Crutchfield commented in the New York Times (30 Mar 1987).that at 60 years of age Vickers 'can put [his voice's] full strength behind long, sustained phrases in the region of upper F, G and A flat without strain or apparent fatigue, and he can soften it... without fading into insubstantiality. This should come as no surprise: Mr. Vickers has an enormous voice, but does not sing as though a special effort at bigness is the point.'

Vickers was named a Companion of the Order of Canada in 1968 and in 1975 won a Molson Prize presented 21 Jun 1976 at Ottawa. Outside Canada he won the 1978 Evening Standard Award for the 'most outstanding achievement in opera' for his performance of Tristan, and in 1985 he was named to the Academy of Vocal Arts Hall of Fame for Great American Singers. He returned to Canada in 1986 to be the first Wilma and Clifford Smith Visitor in Music at the University of Toronto, giving lectures on Dichterliebe, Winterreise, and Peter Grimes to overflowing houses of students and the general public. He also gave a series of three lectures on 'The Contribution of the Art of Music to the Civilizing Process' for the RCMT in July 1991.

Fidelio; filmed at the 1977 Orange Festival in France (Sunchild Production)