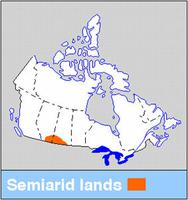 Palliser's Triangle generally corresponds to the area of semiarid land in the southern Canadian prairie.
PreviousNext

John Palliser, sportsman, explorer (b at Dublin, Ire 29 Jan 1817; d at Comeragh House, Cty Waterford, Ire 18 Aug 1887). He spent nearly 3 years (1857-60) exploring what is now western Canada as instigator and leader of the PALLISER EXPEDITION. His interest in the southern prairies and mountains of western British North America had been aroused on an 1847-48 tour of the US, when he had spent almost 11 months hunting buffalo, elk and grizzly bear in the Missouri country. On his return he wrote a popular book about his adventures, Solitary Rambles and Adventures of a Hunter in the Prairies (1853; new ed, 1972).

Heir to an Irish landowner and descendant of a Protestant archbishop of Cashel, he attended Trinity College, Dublin, and saw intermittent militia service 1839-63. Besides his exploration of what is now western Canada, he made 2 important journeys. One was a confidential, semiofficial mission in 1862-63 to the Caribbean and Confederate States, and the other was a voyage in 1869 with his brother Frederick in his own specially reinforced vessel, Sampson, to Novaya Zemlya in Russia and the Kara Sea, exploring and hunting walrus and polar bear. Apart from visits to London (where he discussed possible railway routes with Sandford FLEMING) and to Rome, Switzerland and France, he spent the rest of his life caring for nieces and nephews, in public duties such as justice of the peace, in administering his heavily mortgaged estates, playing Bach's music and walking in the lovely Comeragh Mountains.