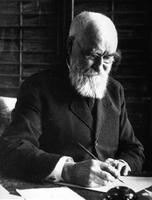 Macoun compiled a catalogue of plants that was the first in Canada to compare with the best from abroad (courtesy Canadian Museum of Civilization).

John Macoun, explorer, naturalist (b at Maralin, Ire 17 Apr 1831; d at Sidney, BC 18 July 1920). Champion of the agricultural capabilities of the western interior, Macoun was also Canada's foremost field naturalist and amassed a collection of Canadian flora and fauna which became the foundation for the National Museum of Natural Sciences. Macoun developed his expertise as a plant geographer himself; he was a graduate of Syracuse University (MA). In 1872 he took part in the first of 5 government surveys of western Canada led by Sandford FLEMING. Over the next decade, he declared in various reports and public lectures that western lands were ideally suited for agriculture. Though the route for the CPR main line was located through the grasslands essentially for strategic reasons, Macoun provided the agricultural justification for that route.

In 1882 Macoun was appointed to the GEOLOGICAL SURVEY OF CANADA as Dominion botanist and began a study of the range and distribution of Canada's flora, adding fauna when he became survey naturalist and assistant director in 1887. Macoun established a Dominion Herbarium of over 100 000 specimen sheets and discovered approximately 1000 new species, many of which were named after him. By the time he retired to Vancouver Island in 1912, the Geological Survey boasted the finest collection of Canadian flora and fauna in the country. He was a charter member of the Royal Society of Canada in 1882. His son William Tyrrell Macoun (1869-1933) was the first Dominion horticulturalist and received numerous awards for his research into apple breeding.