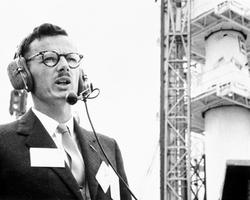 John Herbert Chapman, physicist, space scientist, administrator, architect of the Canadian space program (b at London, Ont 28 Aug 1921; d at Vancouver 28 Sept 1979). In Ottawa, he was scientist, superintendent and deputy chief superintendent in the Defence Research Telecommunications Establishment 1949-68 and then assistant deputy minister for research 1968-74 and for the space program 1974-79 in the Department of Communications.

From 1958-71 Chapman played a key role in initiating and directing the spectacularly successful Alouette/ISIS scientific Earth Satellite program. With the launch of Alouette 1 in September 1962 Canada became the third country to design and build an Earth satellite. In 1966 he was appointed chairman of a government study group to examine the upper atmosphere and space programs in Canada. The resulting report was a landmark contribution to space policies and plans in Canada and led to the redirection of Canada's space program from scientific to applications satellites. The formation of Telesat in 1969 and the launching of its first satellite (Anik A-1) in November 1972 made Canada the first country to have a domestic geostationary communications satellite system. He was also the prime mover behind Canada's co-operative program with NASA and the European Space Agency to design, build and demonstrate the Hermes Communications Technology Satellite. Launched in 1976, the Hermes was a forerunner of the direct-to-home TV broadcast satellite. Chapman was a tireless advocate of the Canadian space industry and of the use of space technology to serve the needs of the Canadian people.