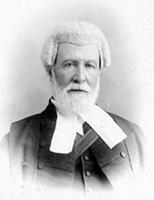 John Foster McCreight, lawyer, first premier of BC 1871-72 (b at Caledon, Ire 1827; d at Hastings, Eng 18 Nov 1913). Educated in England and Ireland, McCreight immigrated to practise law in Melbourne, Australia, but moved to Vancouver Island in 1860, being admitted to the BC bar in 1862. McCreight settled into local society, becoming a member of the Masons and of the Anglican Church. However, his stint as a Westminster barrister was short-lived, and he resigned from the BC bar following a dispute with Chief Justice Matthew Begbie.

In August 1871 John McCreight entered the first provincial legislative assembly as a member for Victoria following BC`s entry into Confederation on 20 July, elected despite his lack of political experience, seemingly aloof persona and outspoken opposition to responsible government and other reformist policies. Designated premier on 14 November 1871, McCreight was defeated on a non-confidence motion in December 1872 and his transitional administration was replaced by a new government formed by Amor DE COSMOS. McCreight continued as a private member, retiring in 1875. In 1873 he was made a Queen's Counsel and in 1880 a Supreme Court justice. After serving in the Cariboo, he moved to New Westminster, BC, in 1883, living there until his retirement in 1897. Soon after, he returned to England. A lake north of Campbell River, BC is named for McCreight.