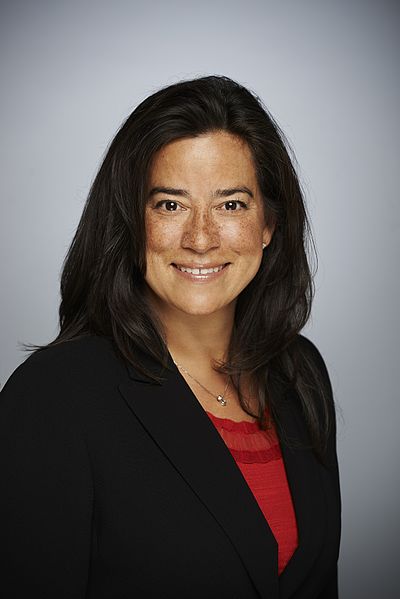 Jody Wilson-Raybould was elected the Liberal MP for Vancouver Granville in 2015. Photo taken on 30 January 2014.

Jody Wilson-Raybould was born 23 March 1971 in Vancouver, British Columbia. Her father, Bill Wilson, is a fiery Kwagiulth (Kwakwaka’wakw) hereditary chief, her mother, Sandra Wilson, a non-Indigenous teacher. They separated when Wilson-Raybould was a small child. Her mother raised her on Vancouver Island, mostly in Comox, not far from the villages of her dad’s Kwakwaka’wakw people.

Wilson-Raybould is a descendant of the Musgamagw Tsawataineuk and Laich-Kwil-Tach peoples, who are part of the Kwakwaka’wakw. She is a member of the We Wai Kai Nation.

Wilson-Raybould married Tim Raybould, a non-Indigenous man, in 2008. He has worked for decades as a management consultant to First Nations groups. He has a doctorate in social anthropology from the University of Cambridge and is a professor at the McGill Institute for the Study of Canada.

From 2000 to 2003, Jody Wilson-Raybould worked as a provincial crown prosecutor in Vancouver’s Downtown Eastside. She strove to reduce that area’s high rate of incarceration of Indigenous residents, seeking to address their marginalization, poverty and inequality.

From 2003 to 2009, Wilson-Raybould was part of the BC Treaty Commission, which oversees treaty negotiations between Indigenous groups and the Crown. She served briefly as an advisor and in 2004, the Chiefs of the First Nations Summit elected her commissioner.

In 2009, Jody Wilson-Raybould was elected councillor of the We Wai Kai First Nation at Cape Mudge on Vancouver Island, where she’s a member and owns a home. The same year, she was elected regional chief of the Assembly of First Nations (AFN). In this role, she worked to advance First Nations governance as well as fair access to land and resources, improved education and health care for Indigenous peoples.

In 2011, Wilson-Raybould and her husband co-authored the BCAFN Governance Toolkit: A Guide to Nation Building, a comprehensive survey of the options for negotiating self-government. Wilson-Raybould was re-elected as AFN regional chief in 2012 and held this position until stepping down in June 2015.

After her election as Liberal MP for Vancouver Granville in 2015, Jody Wilson-Raybould was sworn in as minister of justice and Canada’s attorney general — the first Indigenous person to hold this position. She remained in Prime Minister Justin Trudeau’s political cabinet until February 2019. As minister of justice, Wilson-Raybould played a key role in the development and passage of new legislation. After the Supreme Court of Canada, in 2015, struck down the law against doctors helping patients die, Wilson-Raybould led the effort to introduce Bill C-14, which received royal assent in June 2016. The Medical Assistance in Dying Act limited medically assisted suicide to competent adults suffering “grievous and irremediable” sickness; their death had to be “reasonably foreseeable.”

In July 2017, Wilson-Raybould released a list of 10 principles to guide the federal government’s efforts to reconcile its relationships with Canada’s Indigenous peoples. The first principle states that “all relations with Indigenous peoples need to be based on the recognition and implementation of their right to self-determination, including the inherent right of self-government.”

Wilson-Raybould also introduced Bill C-45, The Cannabis Act, which made it legal for Canadians aged 18 and older to purchase, grow and use a limited quantity of recreational cannabis. The law came into effect on 17 October 2018. (See Cannabis Legalization in Canada.)

In April 2017, Jody Wilson-Raybould introduced Bill C-46, which overhauled Canada’s impaired driving laws. The legislation introduced new criminal offences related to drug-impaired driving and gave police increased powers to conduct roadside breath alcohol testing. Bill C-46 was hailed by some as the most comprehensive reform in more than 40 years. The changes started to come into effect in June 2018.

She also introduced Bill C-16, which added gender identity and gender expression to the list of prohibited grounds for discrimination as an amendment to the Canadian Human Rights Act. This legislation, which amended the Criminal Code to extend protections against hate propaganda, received royal assent in June 2017.

In May 2018, the justice minister introduced Bill C-78, the first major amendments to Canadian family law in more than 20 years. The new law addressed issues such as child poverty, family violence and access to justice. She also introduced Bill C-51, Canada’s first update to sexual assault laws in more than 25 years, which came into effect in December 2018.

As justice minister, Wilson-Raybould sought greater transparency and accountability in legal reform and changed how judges were appointed across Canada. She also introduced Bill C-75 to address delays in the criminal justice system.

The justice minister stirred public outcry following a Twitter exchange on 9 February 2018 with Justin Trudeau in response to a contentious verdict. That day, an all-white Saskatchewan jury found white farmer Gerald Stanley not guilty in the 2016 shooting death of 22-year-old Cree man Colten Boushie. Trudeau tweeted that “I can't imagine the grief and sorrow the Boushie family is feeling tonight” while Jody Wilson-Raybould tweeted: “As a country we can and must do better.”

Opposition politicians and many legal experts criticized both Trudeau and Wilson-Raybould for implying that the jury had given the wrong verdict; they charged that such comments undermine the justice system. Wilson-Raybould insisted that she was not commenting specifically on that verdict, but on the overall treatment of Indigenous people by the police and courts.

In a January 2019 Liberal Cabinet shuffle, Jody Wilson-Raybould became minister of veterans affairs. Many observers considered this a demotion. She left Justin Trudeau’s cabinet on 12 February 2019. Although her public resignation letter did not provide a reason, she stated that she will continue to maintain “a positive and progressive vision of change on behalf of all Canadians.”

Jody Wilson-Raybould’s departure from cabinet followed media reports that the Prime Minister’s Office (PMO) had pressured her to intervene in a federal case against SNC-Lavalin, directing federal prosecutors to negotiate a deal with the company. The Quebec company was charged in 2015 with bribing Libyan officials in exchange for construction contracts. In a Globe and Mail article published on 7 February 2019, unnamed sources said that Wilson-Raybould had refused this directive, which would have led to SNC-Lavalin receiving a fine in a deferred prosecution agreement instead of facing a criminal trial.

In public testimony on 27 February 2019 to a parliamentary committee probing the scandal, Wilson-Raybould affirmed that she had tried to stop “consistent and sustained” political interference from the PMO and others in this matter, citing prosecutorial independence as one of her core values. She said she felt that her stance on this issue had resulted in her removal from the department of justice.

Her testimony resulted in an opposition party call for Prime Minister Justin Trudeau to resign as well as requests for a public inquiry or criminal investigation into the government’s actions in this matter. Trudeau said that he “completely disagrees” with Jody Wilson-Raybould’s version of events. Ethics Commissioner Mario Dion launched an investigation in February 2019. He focused on the alleged pressure from Trudeau and PMO staff.

On 2 April 2019, Trudeau ejected Wilson-Raybould and another former Cabinet minister, Jane Philpott, from the Liberal caucus. Philpott had resigned from Cabinet over the government’s handling of the SNC-Lavalin affair. On 27 May 2019, Wilson-Raybould and Philpott both announced that they would seek re-election as Independent candidates in the federal election scheduled for October 2019.

Dion released his report in August 2019. He found that Trudeau had improperly attempted to influence Wilson-Raybould to grant SNC-Lavalin a deferred prosecution agreement and therefore breached the Conflict of Interest Act. According to the Act, a person in public office cannot use their position to influence, for their own private interests or those of a third party, another person’s decision. In this case, SNC-Lavalin stood to benefit by avoiding a possible criminal conviction. The company would be ineligible for government contracts for a decade if found guilty.

In a statement, Wilson-Raybould said she was grateful that the report confirmed facts from her testimony. But she also expressed sadness at what she viewed as a lapse in essential values and principles in government.

In the October 2019 federal election, Jody Wilson-Raybould ran for re-election as an Independent in the riding of Vancouver-Granville. In late September, she and fellow Independent Jane Philpott announced that they had exceeded their fundraising goals and had received support from across the country. Wilson-Raybould was re-elected on 21 October 2019, with more than 32 percent of the vote. She pledged to “do politics differently” and work with all MPs to support progressive legislation. This included working with the incoming Liberal minority government.

On 8 July 2021, Wilson-Raybould announced that she would not be seeking re-election for the riding of Vancouver-Granville.

DID YOU KNOW?
Law degrees and legal distinction run in Wilson-Raybould’s family. Her father, Bill Wilson, helped successfully amend the Constitution Act, 1982 to enshrine Indigenous rights. He became the second Indigenous person to graduate from UBC Law School in 1973; his first cousin, Alfred Scow, was the first in 1961. Scow became the first Indigenous lawyer in British Columbia and the first Indigenous judge appointed to BC Provincial Court, where he served from 1971 to 1992.

Ken Coates, an historian of First Nations issues, has called Jody Wilson-Raybould “the most influential Indigenous federal politician in Canadian history.” As justice minister, she tried to achieve true reconciliation with the country’s Indigenous peoples. In her words: “The future of Aboriginal peoples and all Canadians is mutually intertwined.”

Wilson-Raybould has been hailed as one of Vancouver’s most powerful people and has appeared frequently in Vancouver Magazine’s “Power 50” list.