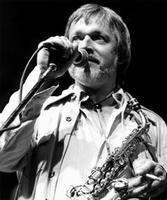 James Braidie Galloway, saxophonist, clarinetist, bandleader, administrator (born 28 July 1936 in Kilwinning, Ayrshire, Scotland; died 30 December 2014). One of the world’s leading soprano saxophonists, Jim Galloway was renowned for his cheerfully lyrical style. Influenced by Sidney Bechet and Johnny Hodges, Galloway’s penchant for swing and his ability to blur the distinction between traditional, mainstream and modern jazz made him one of the most popular performers on the international circuit for several decades. In addition to leading the Metro Stompers and his own Wee Big Band, he also worked in radio and as the artistic director for a succession of Toronto jazz clubs, as well as the TD Toronto Jazz Festival.

While studying at the Glasgow School of Fine Arts (1954–58), Galloway began playing clarinet, then alto and baritone saxophone. He worked with Alex Dalgleish's Scottish All Stars, then led his own Jazz Makers from 1961 to 1964. After moving to Toronto in 1964, he joined the Metro Stompers in 1966, succeeding the bassist Jim McHarg as the band's leader in 1968.

The Stompers moved under Galloway's leadership from trad jazz to a mainstream swing style, and continued as a touring band until 1970. For the next 20 years they were heard intermittently in the Toronto area.

Galloway played alongside many US jazz veterans (e.g., Buck Clayton, Wild Bill Davison, Vic Dickenson, Jay McShann, Buddy Tate) in Toronto clubs during the 1970s. In 1976, he began to tour internationally, both in their company and on his own, developing a reputation as one of the leading soprano saxophonists in the mainstream idiom. His itinerary included major European festivals (e.g., Montreux, Nice, Bern, Edinburgh), jazz clubs and many US jazz parties. His album Walking on Air (1979) was nominated for a 1980 Juno Award for Best Jazz Recording. In 1985, with the Scottish National Orchestra in Edinburgh, he premiered Hot and Suite, a fantasy for symphony orchestra and jazz ensemble co-written with his wife, the bassist Rosemary Galloway.

In 1979, Galloway introduced his Toronto-based Wee Big Band, a 17-piece orchestra devoted to the songs of the jazz and swing bands of the 1930s and 1940s. It drew from one of the most extensive repertoires of any big band in Canada (some 300 pieces by 1991), and played in clubs, festivals and concerts (e.g., with McShann in Toronto in 1981, and at the Duke Ellington Conference in 1987). Members included both veteran players (alto saxophonist Gordon Evans, cornetist Ken Dean, pianist Bob Fenton) and young musicians (trumpeter John MacLeod, and saxophonists Jane Fair and Brian Ogilvie).

From 1981 to 1987, Galloway was host and music director for CKFM radio's Toronto Alive!, a weekly broadcast featuring US and Canadian soloists with a Toronto rhythm section. In this role, Galloway developed a hospitable and highly adaptable improvisational manner that, despite its melodic foundation in the work of Johnny Hodges and Sidney Bechet, existed cheerfully outside of specific stylistic bounds.

Parallel to his performing career, Galloway also worked in a programming and administrative capacity. He served as a booking agent for several Toronto jazz clubs — most notably the Café des Copains (1983–91) and its successor, the Montréal Bistro — and also co-founded the du Maurier Downtown Jazz festival (now the TD Toronto Jazz Festival), serving as its artistic director from 1987 to 2009.

Galloway’s wife, Rosemary, daughter of John Sidgwick, introduced the Swing Sisters (Jane Fair, Jo Sarjeant, Norma Thompson and others) in 1981 and played in several other Toronto jazz groups, including the Metro Stompers and the Wee Big Band.