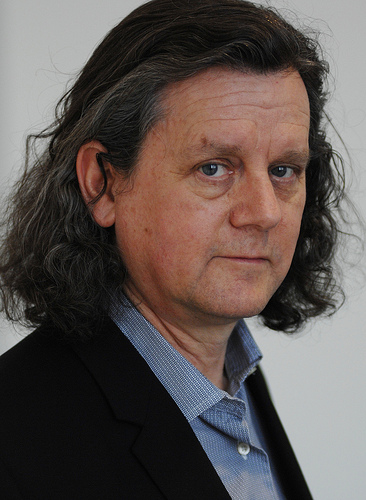 Jeffrey David Wall, OC, artist (born 29 September 1946 in Vancouver, BC). Known for his large-scale, back-lit photo-transparencies, his theoretical writing and his teaching, Jeff Wall is the best-known of a group of Vancouver artists, including Ken Lum, Ian Wallace and Rodney Graham, who have been associated with each other since the late 1960s.

Jeff Wall grew up in Vancouver. His interest in art encouraged by his parents, and by the age of 14, he was painting in the shed in the back yard. He was inspired early on by developments in painting, such as the work of American abstract artist Jackson Pollock, whose paintings he saw at the Seattle World’s Fair in 1962.

Wall received his BA in art history from the University of British Columbia (UBC) in 1968 and completed his MA at UBC in 1970 with a thesis on German Dada artist John Heartfield entitled Berlin Dada and the Notion of Context. He went on to do postgraduate work in a doctoral program in London, England, at the Courtauld Institute (1970–73), where he undertook a thesis, which he never completed, on pioneering French artist Marcel Duchamp. Upon his return to Canada, he became an assistant professor at the Nova Scotia College of Art and Design (1974–75) and then an associate professor at Simon Fraser University (1976–87). He was a professor at UBC until his retirement in 1999.

While studying art history at UBC, he gave up painting and began to experiment with conceptual art in the form of photographs with text as well as film. In 1970, his work appeared in an exhibition of conceptual art titled Information at the Museum of Modern Art in New York. At that point, Wall felt he had hit an artistic block and gave up making art altogether. 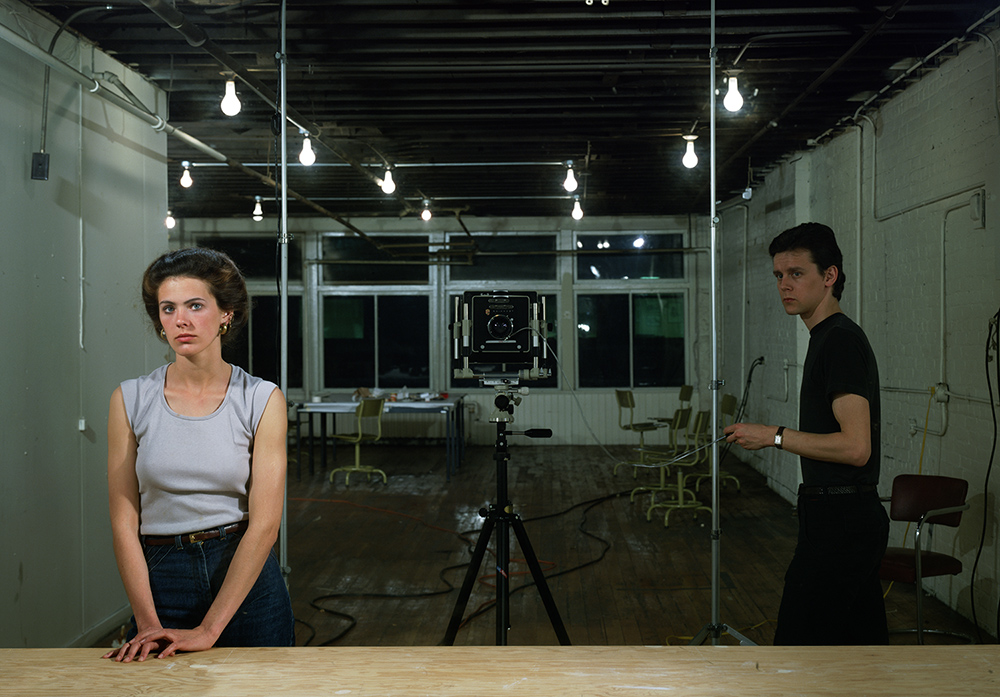 Picture for Women\r\n1979\r\ntransparency in lightbox

Jeff Wall made no art again until 1977, when he produced his first back-lit photo-transparency. The pictures are staged and often refer to the history of art and philosophical problems of representation. Wall's objective has been to recover modernist imperatives to rescue society from what he came to consider the dead end of conceptualism.

Wall's work is underpinned by his considerable body of theoretical writing that advances an argument for the necessity of pictorial art. Much of his work pictures social tension, cities with changing demographics, intersections, suburbs and dead zones. Other work is much more enigmatic, fantastic and seemingly personal. Wall's photographs are complicated productions involving casts, sets and crews as well as digital and post-shoot manipulation. They have been characterized as one-frame cinematic productions rather than photographs in the ordinary sense. They address the history of painting more than the history of photography.

Among Wall’s earliest iconic photographs, and one that encapsulates many of the themes that run through his career, is Picture for Women (1979). Inspired by Édouard Manet’s iconic A Bar at the Folies-Bergeres (1881) and Shot directly into a mirror, Picture for Women has the young Wall, dressed in black slacks and a T-shirt, holding the camera’s plunger and gazing into the picture pensively; in the foreground is a woman in street clothes with her hands folded on a wooden work table, frowning slightly, eyes averted, her expression one of impatience and perhaps also of ambivalence. Picture for Women involves a self-reflexive double representation — of the artist and his model in the mirror and in the photograph itself — and is also a comment on the problematic relationship between photographers and their female models, and indeed of the often misogynist undertones of photographs of women in contemporary life. The posture and expression of the woman in the picture suggests that she is uneasy about being the object of this photograph. 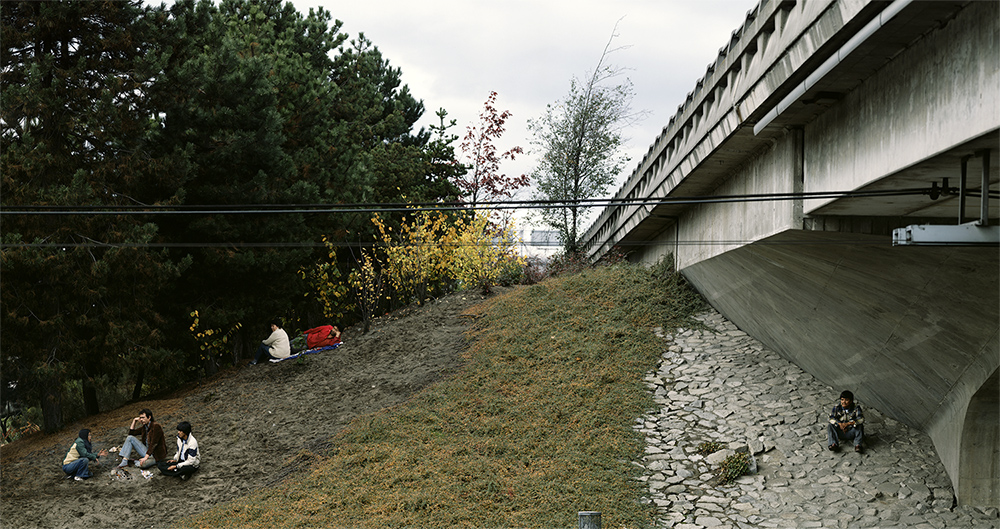 The Storyteller (1986), on the other hand, is a larger and more elaborately orchestrated image. Set on the grassy slope below a concrete highway overpass, the sky slate grey, the photograph has three Indigenous men in the foreground sitting around a small campfire, one, squatting alertly, his mouth open and his hand gesticulating forcefully as though emphasizing a line — he is obviously the storyteller of the title. Behind them, in front of a towering, dense stand of pines, a couple, who look like they are listening to the story from a distance, lounges on the grass; below the cement ramparts of the overpass sits a man, hands folded, face scowling, who looks like he is alienated from the rest. As is often the case with Wall, The Storyteller is a complex composition with multiple levels of irony. Here are Indigenous people engaged in a traditional practice, homeless on their own land, which has been occupied and fragmented. In addition, the Indigenous people themselves look disoriented and fragmented: while two are rapt listening to the story, the others are adrift on the periphery.

Beginning in the 1990s, Wall began making works that allude to a different painting tradition — that of still lives and landscapes. An Octopus (1990), for instance, has an octopus at mid-distance, sensuous but also mysterious, on a work table casting shadows on the wall; the wall, with its slatted boards and weathered green stucco, looks like the wall of an old workshop. 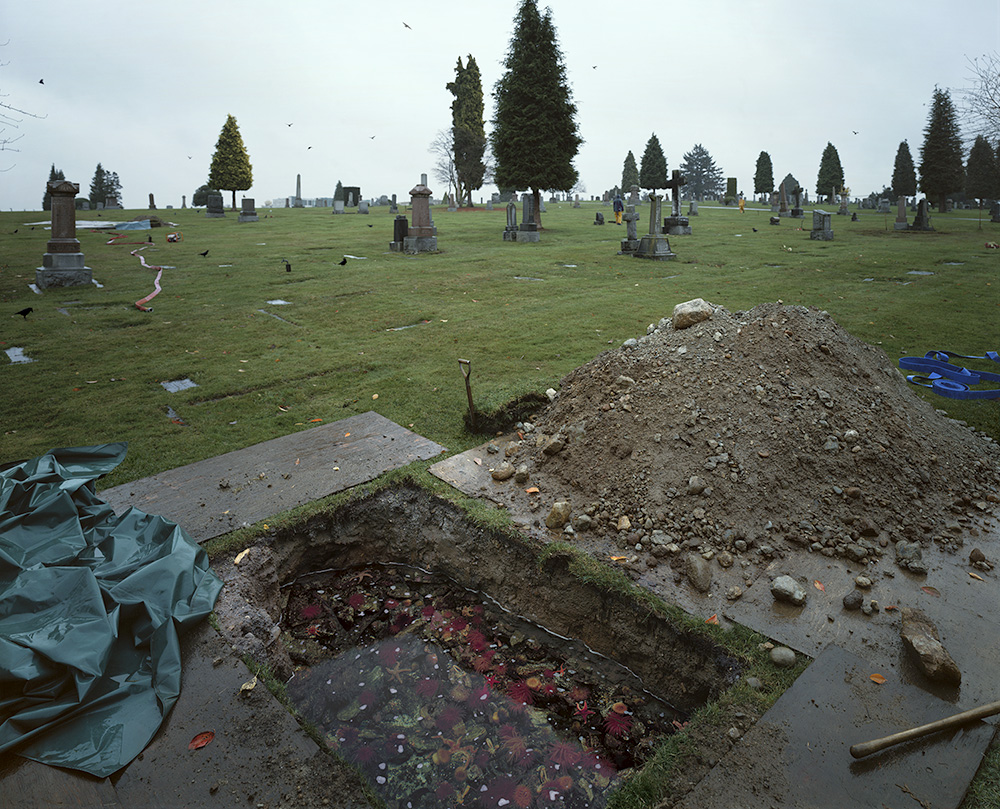 On the other hand, In The Flooded Grave (1998–2000), depicts an open grave — tarp and mound of dirt beside it — that is filled with a cornucopia of sea life: star fish, sea anemone, moss. Everything is a lush, glistening shade of green and purple. Behind, the cemetery recedes, all green lawn and headstones, birds wheeling in the sky and figures wandering in the background.

Jeff Wall is widely acknowledged as the finest and most sophisticated artist-writer and theorists of his generation. His writings range across a wide variety of topics, from fellow contemporary artists to major historical figures to aesthetic and philosophical issues closely related to Wall’s own work. In “Dan Graham’s Kammerspiel” (1982), for instance, he discusses American artist Dan Graham’s critique of the conceptual art movement’s aspiration to undermine the concept of art, a movement Wall began his career with but ultimately moved beyond. “‘Marks of Indifference’: Aspects of Photography in, or as, Conceptual Art” (1995) argues in detail that the conceptual art movement played a critical role in bringing photography to the centre of modern art. “Frames of Reference” (2003) reflects upon the ways in which Wall felt he could not move forward in the style of classical photography, which figures such as Walker Evans and Paul Strand had perfected. Wall mentions that he came to his large format photographs, and what he called the “new art photography,” through the influence of conceptual art and the photographic concerns of serious European cinema in the post-war era.

Wall has appeared in numerous international exhibitions and was given a retrospective at the Vancouver Art Gallery in 1990. Other solo shows have included exhibits at the Institute of Contemporary Arts, London, England (1984), the Irish Museum of Modern Art, Dublin, Ireland (1993), Whitechapel Gallery, London, England (2001), Kunstmuseum Wolfsburg, Wolfsburg, Germany (2001), the Hasselblad Center, Göteborg, Sweden (2002), and the Astrup Fearnley Museum, Oslo, Norway (2004), as well as retrospectives at Schaulager, Basel, Switzerland (2005), the Tate Modern, London, England (2005), the Museum of Modern Art, New York (2007), and again at the Vancouver Art Gallery (2009). In 2010, his work was exhibited at Staatliche Kunstsammlungen, Dresden, Germany and was also included in documentas 10 and 11 (1997 and 2002).

Jeff Wall was the subject of a major retrospective at the Palais des Beaux Arts, Brussels, in 2011, where he displayed 25 of his pieces alongside 130 works by his favourite artists. Those works ranged from photographs by the 1900s photographer Eugène Atget and film excerpts (Fassbinder, Bergman, the Dardenne brothers) to pieces by contemporaries Thomas Struth and David Claerbout.

Fellow of the Royal Society of Canada (2006)