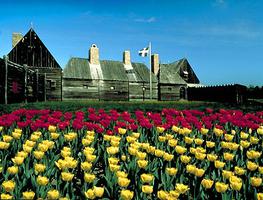 Port-Royal, Nova Scotia, established by Champlain in 1605, was the centre of Acadian life. This reconstruction is a national historic park (photo by Bill Brooks/Masterfile).

Jean de Biencourt de Poutrincourt, Baron de Saint-Just, colonizer in Acadia (b 1557; d at Méry-sur-Seine, France 1615). As a young army officer, he fought in the French Wars of Religion, then entered the service of King Henry IV in 1593. After Henry's grant of the colony of Acadia to Pierre Du Gua de Monts in 1603, Poutrincourt set sail with de Monts the next year.

Their expedition had some success, but the colony was abandoned in 1607 after the revocation of its trading monopoly. Poutrincourt, who had received a seigneurial land grant at Port-Royal [Annapolis Royal, NS], was determined to return to Acadia, and finally did so in 1610 with an expedition that included his sons Charles and Jacques.

Returning to France in 1611 to raise money for the colony, Poutrincourt visited Port-Royal for the last time in 1614, only to find it devastated by English raiders. Nevertheless, a few colonists remained in Acadia with Charles, thus maintaining a continuous French presence there. Poutrincourt was killed during renewed civil strife in France in 1615.