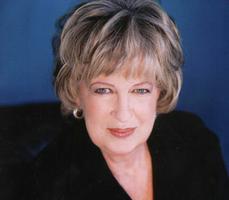 Award-winning actor Jayne Eastwood has crafted many successful roles in a variety of media while remaining in her home town of Toronto (photo by Tim Leyes).

Jayne Eastwood, actor (born at Toronto 17 Dec 1946). Jayne Eastwood was raised in Toronto, where she attended Northern Secondary School. It was in Toronto that she became a member of the cast of the musical Godspell, which played at the Royal Alexandra Theatre. The show ran from 1972-73 and Eastwood worked with cast members Martin Short, Andrea Martin, Gilda Radner, and Eugene Levy, and joined several of them in founding the Second City Theatre Troupe. Eastwood often appeared on Second City's creative offspring, SCTV, most memorably in the famous parody of Goin' Down the Road (her recurring line of dialogue is "I'm bummed out") with John Candy and Joe Flaherty. Though Eastwood moves effortlessly from comedy to drama, comedy remains her magnetic north, drawing her to work with Women Fully Clothed, a group of performers nominated in 2005 for a CANADIAN COMEDY AWARD for best sketch troupe.

From the early 1970s to the mid-1980s Eastwood appeared in stage productions of works by Michel Tremblay, Tom Stoppard, and Neil Simon, by such companies as Theatre in the Dell, Toronto Arts Productions, Centrestage Company, and Toronto Truck Theatre. She maintained a presence in both movies and television, working steadily in a variety of roles that began, in the 1980s, to include considerable voice work.

One of her first television appearances was on the series That's Show Biz with Lorne Michaels and Hart and Earl Pomerantz, and she went on to become a regular on John Byner's show Bizarre from 1980 to 1985. In film, she played the president's wife in Al Waxman's sex comedy My Pleasure Is My Business (1975), appeared in the Robin Spry film One Man (1977), had a small part in David Cronenberg's Videodrome (1983) and did voice work for The Care Bears Movie (1985). She could be heard as the voice of Mrs Dingle and of Cookie and Joyce in the animated shows For Better or For Worse, and Bob and Margaret. In 1998 she won a Gemini Award for best supporting actress in a drama for Dangerous Offender: the Marlene Moore Story. She played Aunt Agatha on the series Noddy and Friends, winning a 1999 Gemini Award for her work.

Eastwood's film and TV appearances continued through the 1990s and into the new millennium, in works as varied as Life with Judy Garland: Me and My Shadows (2001), Chicago (2002) and My Big Fat Greek Wedding (2002).

Eastwood has had parts in everything from stage productions of Marat/Sade to TV shows such as King of Kensington, Anne of Green Gables, and Riverdale, and in radio plays like CBC's Steve the Second. She is best known for her role as Betty, the pregnant wife abandoned by Joey in the canonical English-Canadian film Goin' down the Road (1970). Many viewers will recall her as the character Ronnie Sacks in the Canadian television series This Is Wonderland or as one of the occasional characters in the partly improvised Train 48. She appears as Maxine Bingley in the series Billable Hours and plays a teacher in the movie Hairspray (2007), which was shot in Toronto. She has a recurring character part in the popular series Little Mosque on the Prairie, and reprised her Goin' down the Road role in the sequel, Down the Road Again (2011).

Eastwood is a talented and reliable actor who decided early on to remain in Toronto rather than leave for the limelight of the US. Her career is curiously and satisfyingly Canadian in that she has crafted a successful working life as an ensemble player in a variety of media while remaining in her own home town.