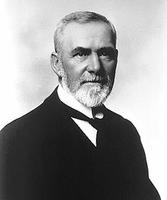 Heir to his family's coal fortune and spokesman for capital over labour, Dunsmuir dominated BC's economy until 1900 (courtesy PABC).

James Dunsmuir, industrialist, politician, premier of British Columbia 1900-02 (b at Ft Vancouver, Wash 8 July 1851; d at Cowichan, BC 6 June 1920), son of Robert DUNSMUIR. Main heir to his family's coal fortune and spokesman for capital over labour, Dunsmuir dominated BC's economy until 1900. From 1876 to 1910 he managed the family coal operations on Vancouver Island, increasing annual output tenfold by opening new fields and improving mining methods. He invested widely in transport, agriculture, manufacturing and other resource industries.

Dunsmuir withstood all attempts at unionizing his operations, becoming labour's chief target in western Canada. In 1905 he sold the Esquimalt and Nanaimo Railway to the CPR and in 1910 he sold his collieries to William MACKENZIE and Donald MANN for $10 million.

Dunsmuir was elected MPP for Yale in 1898; he was premier of BC from 1900 to 1902, leading a Conservative administration concerned chiefly with Asian immigration, railway construction and BC's position within Confederation. A less prestigious figure would have had problems redistributing the legislature to reflect the now dominant mainland, and a more partisan politician would have remained longer in office. Dunsmuir disliked politics and served more from a sense of public duty than a desire for power. He reluctantly agreed in 1906 to be the province's lieutenant-governor, but resigned in 1909, relieved to be free to enjoy his lands and yacht.

Among Dunsmuir's real estate possessions was Hatley Castle, which was built for him by Samuel MacLure and which today houses the administration offices of Royal Roads University.